from The Atlanta Journal-Constitution 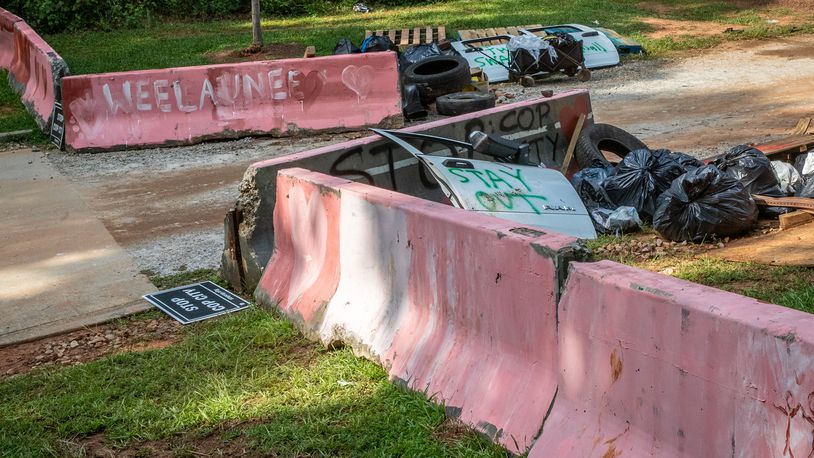 Five activists protesting Atlanta’s new public safety training center have been arrested and charged with domestic terrorism, the GBI announced Wednesday — one day after the latest clash between authorities and activists at planned site for the controversial development.
Dozens of arrests have been made since activists began taking up residence on the site — and engaging in more extreme actions — in an attempt to stop the training center’s construction.
But the charges announced against those arrested this week are believed to be the most serious to date.
“Yesterday, several people threw rocks at police cars,” GBI spokeswoman Nelly Miles wrote in a press release. “Task force members used various [violent] tactics to arrest individuals who were occupying makeshift [sic] treehouses.”
Those tactics included tear gas and pepper balls.
Members of  “Stop Cop City” coalition were scheduled to hold a press conference at 10 a.m. Wednesday. But DeKalb County police had access to the press conference site — a piece of former DeKalb County parkland adjacent to the training center property — blocked off [in order to prevent word of their violence reaching the general public].
Authorities  said they found “explosive devices” after Wednesday’s efforts to clear the forest. [The word of the police was taken at face value, despite them constantly making up stories to make themselves look better, because this reporter is way to lazy to actually investigate anything]
The Atlanta City Council approved last fall a land lease paving the way for the Atlanta Police Foundation to build the sprawling $90-million training facility on more than 300 acres of city-owned forest in southwestern DeKalb County.
The James M. Cox Foundation, the “charitable” arm of Cox Enterprises which owns The Atlanta Journal-Constitution, has contributed to the training center fundraising campaign. It is among several Atlanta-based foundations that have contributed.
In the year-plus since the land lease was approved, a coalition of activists — anarchists, police abolitionists, environmentalists and everyone in between — has pushed back against the concept, seeing it as the city doubling down on police militarization and other controversial tactics even in the wake of 2020′s [George Floyd uprising].
Conventional protests and opposition efforts have also taken place. But more extreme tactics have included vandalizing police property and the homes and offices of contractors tied to the training center’s construction, setting fires and throwing Molotov cocktails at police and taking up residence in the forest.
Posted in Atlanta Forest, Forest Defense, Fuck the Police, News, Prisoner Solidarity, State Repression.