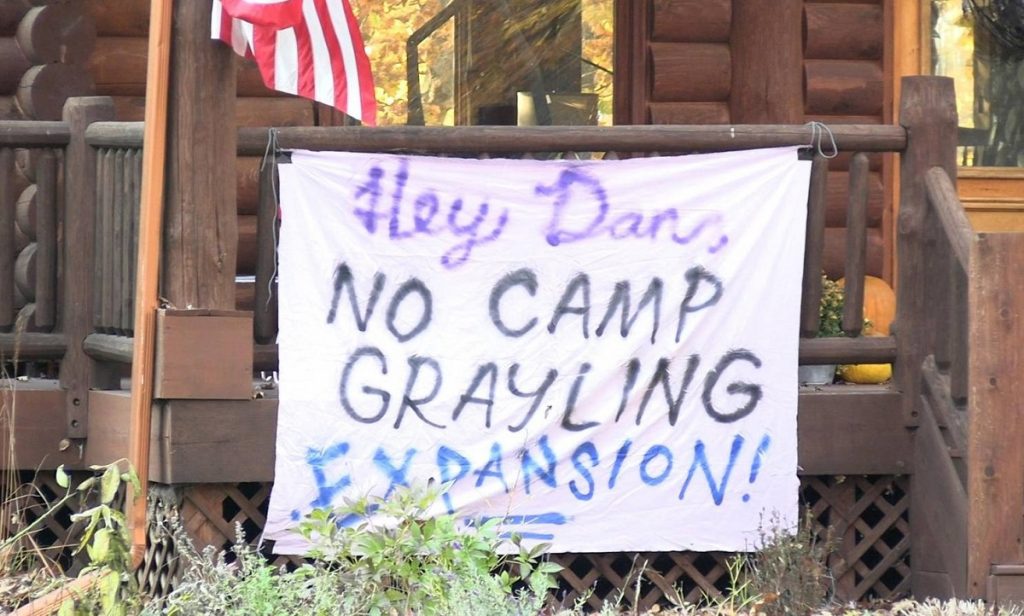 The following action report was originally published by Stop Camp Grayling on social media. For more background on this struggle, see this zine here.

Forest defenders descended on Department of Natural Resources (DNR) director Dan Eichenger’s home last week to demand he reject the land-use agreement with the Michigan National Guard, which would double the size of Camp Grayling. The DNR controls the land encompassing the proposed expansion, and would lease it out for free to the National Guard.

Masked forest defenders approached Eichenger’s home, chanting and lighting off fireworks. They hung a banner from the porch reading: ‘Hey Dan, no Camp Grayling expansion!’ read a statement telling Eichinger to ‘announce publicly that the DNR will do the right thing and reject the proposal,’ and chanted ‘Stop Camp Grayling’ and ‘We’ll be back!’

Their demands include not only rejecting the proposed expansion, but also call on the DNR to return the land to its rightful stewards: the Ojibwa, Odawa, and Potawatomi peoples.

“We know the military exists to bring pain and misery to our relatives and our earth,” said a group member. “The war machine must be stopped,” said another, “Our targets have names and addresses.”

In January 2022, Camp Grayling’s colonel Myers met with Eichenger to pitch the expansion of the training facility. Dan Eichenger is one of two individuals who can put a stop to this expansion.  The other individual is Governor Gretchen Whitmer.