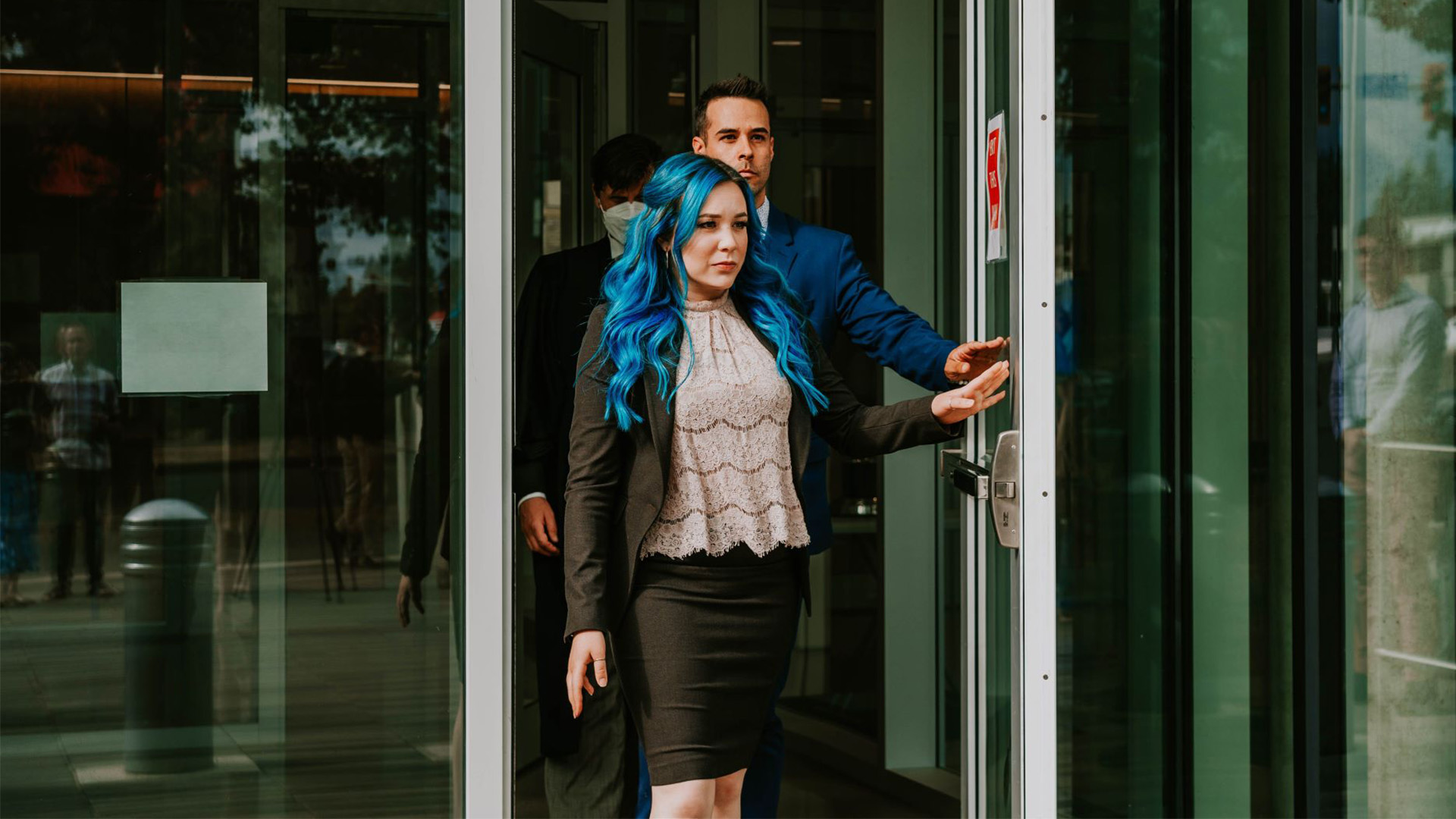 On Wednesday morning, animal rights activists Amy Soranno and Nick Schafer were sentenced to 30 days in jail, 12 months of probation, and are required to provide their DNA to the National DNA Data Bank.

Soranno and Schafer were able to walk free out of the courthouse, however, because B.C. Supreme Court Justice Frits Verhoeven ruled that they won’t be taken into custody until Oct. 21, 2022, when they will enter the Okanagan Corrections Centre. During the year-long probation, they will be prohibited from making contact with the Excelsior Hog Farm, its owners, or any animal farm.

In response to the sentencing decision, dozens of animal rights activists descended on Excelsior Hog Farm to demonstrate their opposition to the farm itself, and to the criminalization of Soranno and Schafer whose trial stems from a demonstration at the same farm in 2019. Meat The Victims went live on their Instagram account a couple times while outside the farm in Abbotsford.

Even with the sentence being shorter than the 90 days sought by the prosecution, the two activists plan to appeal. Soranno told Unicorn Riot before Wednesday’s hearing that they plan to appeal no matter what. “The basis for our main defenses were cut out from under us and we, and the animals, were silenced repeatedly throughout this case.”

She continued, “We need to right these wrongs, and we feel our grounds for appeal are strong.”

Their legal counsel will also be filing an application for bail pending appeal. If the bail application is granted by the British Columbia Court of Appeal, Soranno and Schafer may have their sentence deferred until after the appeal is heard.

Aside from continuing their legal fight, they are unwavering in their efforts to push for mandatory CCTV cameras in all animal farms and slaughterhouses across the province, and for B.C.’s Ministry of Agriculture to change animal law enforcement from the BCSPCA to “a more accountable and effective government agency.”

“If you’re proud of what you’re doing, you’re not doing anything wrong, you want activists to stop coming in, then let’s have cameras inside there, so all of that can be dealt with.”

When it comes to accountability and oversight, Schafer says there is none. “It’s a self-regulated industry. These farmers are basically running on the honor code,” Schafer told us.

“It’s just absolutely ridiculous to me that an industry this massive, that an industry that it’s sole purpose is to turn sentient living, feeling beings into products, to raise them and kill them, that there’s no oversight as to how these animals are treated.”

Soranno mentioned how since 2019, ‘Ag-Gag’ laws have been passed in Alberta, Ontario, Manitoba, and Prince Edward Island, which criminalize those who film or report animal cruelty inside farms and slaughterhouses.

“These are massive industries with powerful ties to people in positions of power, including the legal system; therefore, these vested interests ensure the violent abuse and systemic cruelties toward farmed animals remain hidden, and that animal activists are criminalized.”

In his decision, Justice Verhoeven ruled that Teal-Jones would undoubtedly “suffer irreparable harm if the injunction [was] not granted.”

In both the Fairy Creek Blockade case and the Excelsior Hog Farm case, activists were protesting to protect things that can’t exactly speak up for themselves.

“While I cannot apologize for what I did, I would like to apologize to a specific female pig at Excelsior Hog Farm, who we have come to call “Her” rather than the abstract number tagged to her ear. She was found crammed in a metal cage, like the countless others next to her. But what stood out as different, was the dark blue and purple complexion of her skin. Upon closer examination, we realized she was covered in bruises, cuts and blood. In fact, she was laying in a pool of her own blood.”

Soranno continued: “She needed help. I felt like, and still feel like, a monster—for seeing her, recognizing her unbelievable suffering, and leaving her behind. I wish more than anything that we could have rushed her to the vet and helped her, but we had no choice. Leaving the barn with her, surrounded by police, was simply not possible. To me, walking away is what felt criminal.”