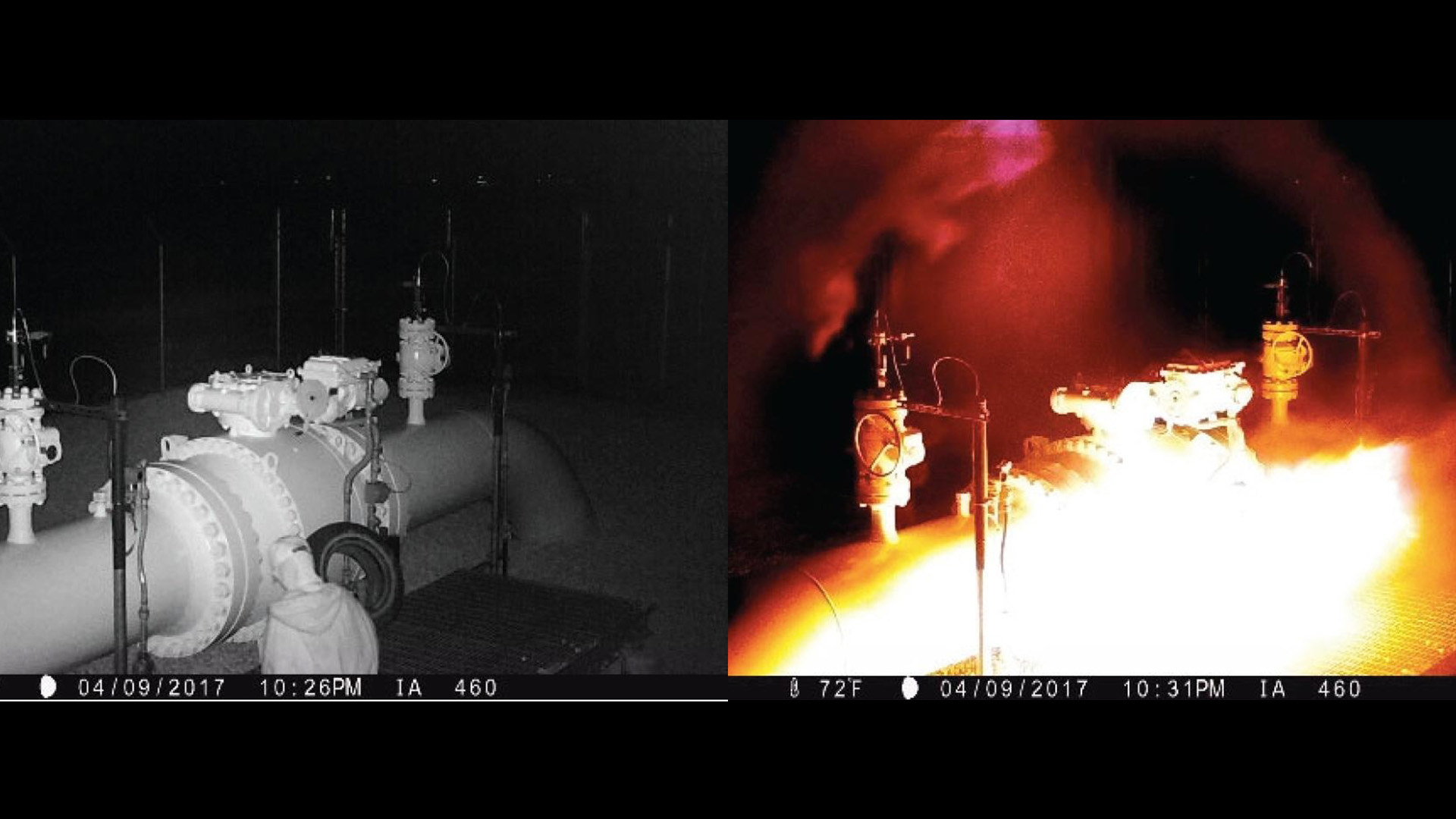 Des Moines, IA – Federal prosecutors are seeking a sentence of 96 months in prison for Ruby Montoya, admitted Dakota Access Pipeline (DAPL) saboteur, which includes a ‘terrorism enhancement’ that could tack years onto her sentence.

In November 2016, on the night of the election of Donald Trump, Montoya and Jessica Reznicek, who had become convinced that an escalation of tactics was necessary, began their arson and sabotage spree. In a press release shared on July 24, 2017, the two admitted to their direct action campaign.

“After having explored and exhausted all avenues of process, including attending public commentary hearings, gathering signatures for valid requests for Environmental Impact Statements, participating in Civil Disobedience, hunger strikes, marches and rallies, boycotts and encampments, we saw the clear deficiencies of our government to hear the people’s demands,” the pair wrote.

According to federal law (18 USC § 2332b(g)), a crime is considered an act of terrorism if it is “calculated to influence or affect the conduct of government by intimidation or coercion, or to retaliate against government conduct,” and is a violation of a federal statute. 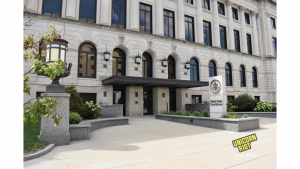 “While stopping the DAPL may have been the immediate purpose of their unlawful conduct,” wrote Assistant United States Attorney Jason T. Griess in his memorandum to the court, “Reznicek and Montoya’s ultimate goal was to address ‘the broken federal government and the corporations they continue to protect.’ A federal government which they described as ‘more like a Nazi fascist Germany as each day passes.’”

Montoya’s sentencing has been delayed several times and a date for the hearing is not currently set. Meanwhile, Reznicek was sentenced to eight years in prison with a domestic terrorism enhancement on June 30, 2021. She appealed the enhancement, but it was upheld on June 6, 2022 by judges Ralph R. Erickson, David R. Stras, and Jonathan Kobes, on the Eighth U.S. Circuit Court of Appeals. (All three judges were appointed by former president Donald Trump.)

In recent pleadings to the court, Montoya has sought to withdraw her admission of guilt, admitting to the campaign of sabotage against the Dakota Access Pipeline, but claiming that she’d been coerced into doing it. Her co-defendant Jessica Reznicek, members of the Des Moines Catholic Worker Community, her father, her mental health, and even an undercover federal agent were all to blame for her conduct, according to Montoya.

According to an article in The Economist, by the fall of 2020, Montoya had “agreed to cooperate with the FBI.” Although the contents of her meetings with the FBI have not yet come to light, such meetings usually involve providing information on other activists in hopes of receiving a lighter sentence. Montoya still denies cooperating with the FBI. 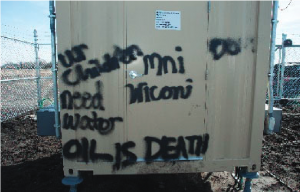 Graffiti on electrical equipment in Boone County, Iowa next to a pipeline damaged by Ruby Montoya and Jessica Reznicek on March 18, 2017. Photo source: US Federal District Court, S.D. Iowa.

“She’s saying anything and everything to avoid going to jail and that’s a deflated position to be in,” said Frank Cordero, co-founder of the Des Moines Catholic Worker Community where Reznicek and Montoya lived during their sabotage campaign. “It’s just sad to see a person with such integrity and such hopes be destroyed like this. I pray for Ruby all the time.”

In a motion to the court last year, Montoya’s attorney, Daphne Silverman, pointed fingers at members of the Des Moines Catholic Worker, claiming that they had pressured Montoya into taking action against the pipeline.

“Ms. Montoya was then coerced by the activist community within the Catholic Worker Des Moines,” the motion reads. “This activist community offered the opportunity to engage in destruction but did not give Ms. Montoya the information and other tools she needed to evaluate what they requested.”

The allegation that other activists offered her the “opportunity” and “tools” to engage in crimes implies that members of the Des Moines Catholic Worker were aware of her ongoing sabotage campaign or had even encouraged or “requested” that she engage in it. Implicating others in serious federal crimes is a form of cooperation with law enforcement usually avoided by activists loyal to the movements they’re a part of. 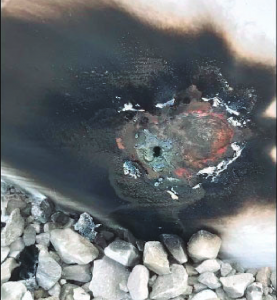 Part of the Dakota Access Pipeline in Hedrick, Iowa cut with an acetylene torch by Ruby Montoya and Jessica Reznicek. Photo source: US Federal District Court, Southern District of Iowa.

Despite this breach of trust, Cordero said that for him, it’s the federal government and the pipeline companies that are to blame, not Montoya. “I feel sorry for her and I feel no resentment toward her,” Cordero explained.

“The real criminals are the ones running the government and creating the laws,” he said.

“The ‘justice system’ is hardly that,” Cordero continued. “The fear tactics that they use, piling charges on top of charges, that’s how the feds do it. Did you know that 95% of all criminal charges are pled? Rarely does anyone go to trial. The prosecutors lay on tons of charges and you are facing the possibility of never getting out of prison alive, so you plead. This is typical of how the justice system works.”

Cordero also pointed out that none of the actions claimed by Montoya and Reznicek caused harm to any living thing. “Jess is no terrorist, neither of these women did any violence,” said Cordero. “They did a great thing, trying to bring down an oil pipeline.”

In the sentencing memo to the court, the federal prosecutor performed the same sentencing guideline calculation that they’d performed for Reznicek prior to her sentencing. For Reznicek, the prosecutor sought a sentence of 180 months—15 years in federal prison—but sought only 96 months, or eight years, for Montoya “to avoid unwarranted sentence disparities among defendants with similar records who have been found guilty of similar conduct.”

Whatever information Montoya has provided to authorities, it appears that it may not result in a lighter sentence.

In January 2021, Montoya signed a plea agreement admitting to ten acts of sabotage committed between November 2016 and May 2017. In each case, Montoya and Reznicek admitted to either setting fire to construction equipment associated with the DAPL project or using an oxy-acetylene torch to cut holes in the pipeline itself at various locations along its route.

“We began in Mahaska County, IA, using oxy-acetylene cutting torches to pierce through exposed, empty steel valves, successfully delaying completion of the pipeline for weeks,” the pair wrote in a public statement in 2017. “After the success of this peaceful action, we began to use this tactic up and down the pipeline, throughout Iowa (and a part of South Dakota), moving from valve to valve until running out of supplies, and continuing to stop the completion of this project.”

Montoya’s new oppositional stance toward her co-defendant and former movement allies worried many involved in climate justice and related movements, as did her new attorney’s series of sealed motions in court.

Despite her attempts to cast blame on others and her claims that she was not capable of fully understanding the consequences of her actions, in June of this year, U.S. District Judge Rebecca Ebinger rejected Montoya’s motion to withdraw her guilty plea, stating that Montoya had failed to prove that she’d received ineffective legal representation. Judge Ebinger also cited Montoya’s statements under oath that she understood her plea agreement and was satisfied with her legal representation. (Ebinger was appointed by former president Barack Obama.)

“Montoya confirmed she was not pressured in any way to plead guilty,” Ebinger wrote in her nine-page ruling. “On this record, Montoya cannot demonstrate a fair and just reason to withdraw her guilty plea.”

The 1,172-mile-long Dakota Access Pipeline, which now stretches from the northwest corner of North Dakota to Patoka, Illinois, was heavily contested by Indigenous and environmental activists. Indigenous people and those fighting alongside them staged a yearlong direct action campaign in 2016 and 2017 in hopes of preventing the project’s completion.

Fierce battles with law enforcement and private security companies near the encampment on the Standing Rock Sioux Reservation in North Dakota involved thousands of people and gained national support, but were ultimately unable to stop the project’s completion. On June 14, 2017, a federal judge found that the Army Corps review of DAPL’s potential impacts to wildlife, hunting and fishing rights, and the environment did not fulfill their obligations under the National Environmental Protection Act (NEPA), yet the pipeline has remained operational.

In Montoya and Reznicek’s press release shared on July 24, 2017, they expressed how “the courts and public officials allowed these corporations to steal permissions from landowners and brutalize the land, water, and people.” They concluded that “the system is broken and it is up to us as individuals to take peaceful action and remedy it, and this we did, out of necessity.”

This prosecution unfolded in the Southern District of Iowa, which has played a key role in many probes of leftist groups since 2004, hundreds of pages of FBI records involving ‘domestic terrorism’ investigations obtained by FOIA showed. This included the 2004 and 2008 Republican National Conventions, a 2004-2007 Crimethinc investigation, and a 2009 grand jury in Davenport that held a Minneapolis resident without charges for four months.