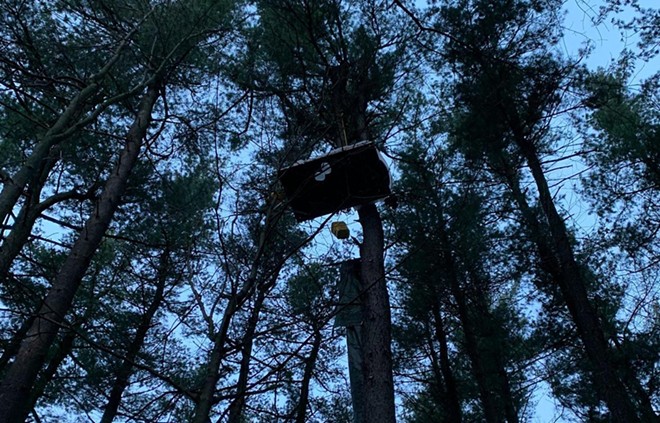 A protester is camped high in a tree to protect a forested section of Ann Arbor from being cleared for a luxury homes project.

A forest defender camped high in a tree Monday morning to protest a planned development of luxury homes in a forested section of Ann Arbor.

The protester, who goes by the name Nuthatch, plans to sit in the tree “indefinitely” to prevent the removal of hundreds of trees to make way for the Concord Pines development site at 660 Earhart Road in northeast Ann Arbor.

The developer, the Toll Brothers, plans to build 57 luxury homes on a 39-acre site.

“We don’t do this for fun,” Nuthatch said in a statement. “Certainly, being up here in the canopy and surrounded by the sounds of the forest is a lovely place to be. But please believe me that I wish with all my heart that we could find an easier way besides facing off against police day after day. But we can’t stop. We aren’t just fighting Toll Brothers — we’re fighting the systems that support them, the systems of white supremacy, capitalism, and oppression of all kinds.”

The Ann Arbor City Council approved the development with an 8-3 vote in October 2021.

Crews plan to plow down more than 750 trees. 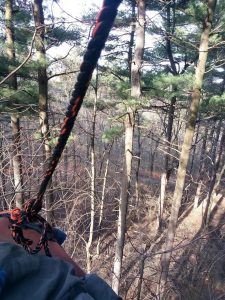 A protester is sitting in a tree to stop the destruction of forested land in Ann Arbor.

Last month, members of the protest group FIGHT Concord Pines locked themselves to construction machinery, and at least two of them were arrested.

The land also has connections to indigenous people, protesters said.

“The land itself was traditionally stewarded by the Wyandot and the Bodéwadmi peoples, many of whom waged immense resistance battles against their forced removal to Kansas and Oklahoma in the 1800s,” they said. “Despite a record of nearby burial mounds and remains, Toll Brothers have not provided any details on their plans to involve the Bodéwadmi or Wyandot should remains, cultural artifacts, or other significant items be discovered at the site.”

In a statement Monday morning, protesters said they don’t plan to back down.

“There is no time left to stop the climate crisis by appealing to weak-willed government officials,” protesters said. “Direct action must be taken to stop the destruction of our planet.”