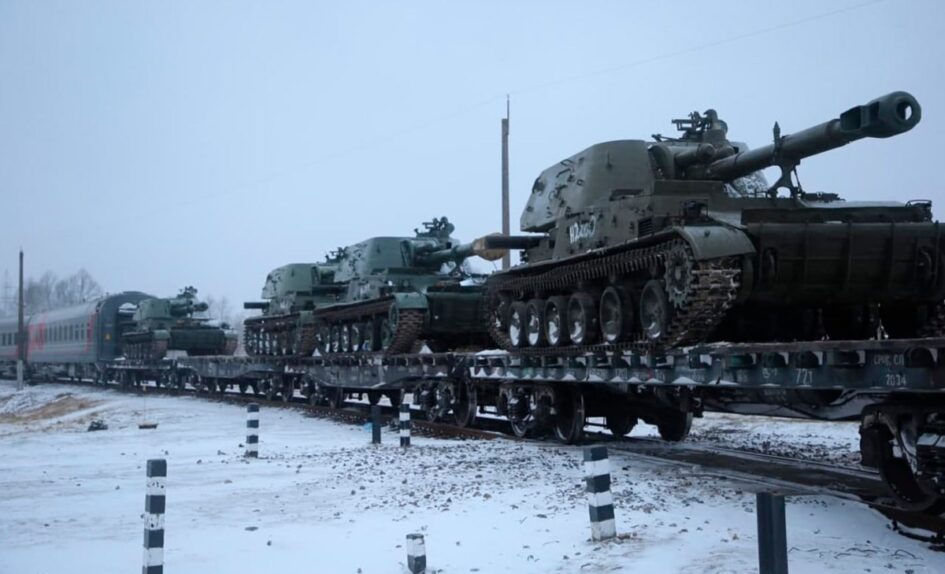 Arrival of military equipment from Russia at the Brest-Yuzhny railway depot in January.

On April 6, the Ministry of the Interior reported that security forces used live ammunition to arrest “saboteurs” along a rail track in late March. Three of them allegedly acted together and set fire to two relay cabinets near Osipovichi. Video footage shows that one of them, with bandaged knees, has difficulty answering questions of the police forces, the second has blood on his face, and the third is really scared. Deputy Interior Minister Gennady Kazakevich now confirmed the shooting of the suspects during alleged acts of sabotage on the railroad track. At the press conference he spoke of two seriously injured – a resident of Bobruysk, who was allegedly involved in the destruction of relay cabinets, and a resident from the Minsk district, whose car was parked near the tracks and who was snitched on by “citizens who are not indifferent”.

On March 25, the telegram channel of the Community of Belarusian Railway Workers wrote that two relay cabinets of the Signal, Centralization and Blocking system (SCB) between the train stations Barysau and Novosady had gone up in flames the night before. On March 28, the Railway Workers’ Channel reported another incident with SCBs – they were out of service after an arson attack between the train stations of Sovietski and Vereitski in Osipovichi district. April 2: A staff member of “SB. Belarus Today” correspondent Yury Terekh reports that “a few groups who decided to embellish their free time in the evening with a simple terrorist act [on the train tracks] have already encountered security forces.” On April 6, Deputy Interior Minister Gennadiy Kazakevich provided details of the incident. According to him, on the night of March 30, police, together with Russia’s FSB intelligence service and “with the support of SOBR,” detained three 27- and 28-year-old residents* of Bobruysk who, allegedly, were “involved in the destruction of relay cabinets of the security system” near Osipovichy on March 28: “During the arrest, the terrorists* actively resisted and tried to escape. A ‘deadly weapon’ was used,” Kazakevich said.

One of the injured residents of Bobruysk was hospitalized, the others were treated on the scene. According to the deputy head of the Ministry of the Interior, radio transmitters and “a specially made device for derailing trains” were found in their car after the arrests.

The three Bobruysk residents are not the only suspected saboteurs named by Kazakevich. On April 1, police officers in the Barysau district arrested a suspect who allegedly committed a “similar crime” on the night of March 24-25. The 40-year-old lived in a Minsk suburb. He was also shot and seriously injured. During the search of his apartment and car, several weapons, radios, binoculars, a laptop and telephones were seized.

Simultaneously with Kazakevich’s statement, the anonymous Zheltyes Livy telegram channel published 2 videos of the arrest of all four suspects. In the video of the 40-year-old man from the Minsk district, law enforcement officers can be seen running up to a red Peugeot and smashing the window. After he is tied up, he is seen lying with his face down on the ground, then he is tied up one more time, and the prisoner is seen lying with his face up with his legs bandaged, a pool of blood can be seen next to him. Persons in civilian clothes and balaclavas are giving him an infusion. We were not able to find out the name of the arrested man.

The “Community of Belarusian Railroad Workers” gave the names of the three prisoners from Bobruysk – Yevgeni Minkevich, Vladimir Avramtsev and Dmitry Klimov.

In the footage released by Zheltyes Livy, a man in a dark blue jacket with a belt on his leg is asked about “Plan Peramog” and what instructions he received – it is Dmitry Klimov. He answers that he approached the organization Plan Peramog a year ago and that he received his first instructions “a few weeks ago”. According to him, he had to pick up some items from a hiding place near Minsk. When asked, “Who set the cabinets on fire?” Klimov replied, “I did.”

Another arrested person, Vladimir Avramtsev, wears a gray-colored motorcycle outfit and has marks of beatings on his face; he says he had to “burn the cabinets”. A third resident of Bobruysk, in a blue jacket, – Yevgeni Minkevich – answers to the question about the reason of his arrest: “I am still guessing”.