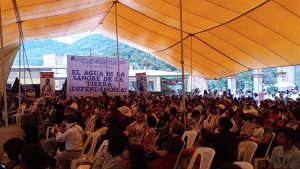 Peoples, organizations and collectives from different states called for the “Caravan for water and for life: Peoples united against capitalist dispossession”, to denounce “the repressive escalation of dispossession and plundering” against indigenous communities and Mother Earth and to “enforce the law of the peoples”.

From March 22, International Water Day, until April 24, the Caravan will make visible the struggles for water and the defense of the territory of the states of Puebla, Tlaxcala, Veracruz, Mexico City, Mexico State, Morelos, Oaxaca, Guerrero and Querétaro, as well as territories in the rest of the country and other continents, “and along the way new paths of organization will be traced to jointly resist the attacks of this capitalist system and its protector states.”

“The death projects promoted by capitalism, when confronted by collective resistance, use the State to create decrees and send its repressive forces against those who oppose the exploitation-destruction of nature and the dispossession of the territories and community heritage of the native peoples”, recalled the peoples and organizations calling the meeting, among which are the United Peoples of the Cholulteca and Volcanoes Region and the Peoples’ Front in Defense of Land and Water (FPDTA) Morelos, Puebla, Tlaxcala.

Therefore, on the occasion of International Water Day, the Caravan will begin in the municipality of Juan C. Bonilla, Puebla, where the struggle against the plundering of wells and aquifers by the Bonafont company is being carried out, and will end on April 24 in the community of Cuentepec, Morelos.

“In the face of this war imposed by capitalism, we the peoples respond with resistance, autonomy and organization,” they assured.

Below is the full communiqué:

CARAVAN FOR WATER AND FOR LIFE!

To the CCRI CG EZLN

To the Sixth Zapatista Commission of the EZLN

To the National Indigenous Congress

To the Indigenous Council of Government and its spokeswoman, María de Jesús Patricio Martínez

To the collectives, movements, organizations and individuals of SLUMILK’AJXEMK’OP

To the Europe, Insubmissive, Dignified and Rebellious

To the Networks of Resistance and Rebellion

To the Sexta in Mexico and the world

To the People of Mexico

To the peoples of the world

“It is the time of rebellious dignity, of building a new nation by and for all, of strengthening the power from below and the anti-capitalist left, of making the guilty pay for the pain of the peoples of this multicolored Mexico.

LET THE EARTH TREMBLE IN ITS CENTERS

In these moments of crisis and global capitalist war we the peoples are living a repressive escalation of dispossession and looting against our communities and mother earth. The original peoples, the organizations and collectives that remain in resistance, we see that the storm of which our Zapatista brothers and sisters spoke to us, not only has been here for years, but now it is more devastating, more violent.

We are living the last onslaught of the hydra, this time it is coming for everything:

It comes for the water, both in towns and cities, the water that once stripped is returned with dissolved death in the form of mercury, cyanide and other poisons that industries spew.

It comes for the land and the minerals that are stored in it; for the fields to reproduce again and again transgenic seeds that slowly kill their sustainers and those who ingest them. They come for the homes of families that are built with the effort of entire generations, to demolish them and put in their place high empty office towers and shopping malls or to pass the deadly Mayan train; or to place gas pipelines; or to trace between the cracks and furrows death as a destiny for all.

They come for the dignified work of peasants, artisans, merchants, teachers and workers to cheapen it and replace it with the slave exploitation that the capitalists yearn for.

They come for history, destroying prehistoric and pre-Hispanic vestiges that tell the story of our ancestors, many of them recently discovered, many of them destined to be buried under airplanes or trains.

They come for all life, for the jungles, for the mountains, for the forests, for the rivers, the seas, the lakes, the cenotes, the ameyales, the lagoons, the deserts, they are lovers of cemeteries and that is what they want to turn the world into.

They come for everything.

They are no longer just threats from capital, the orders have already been given and the attacks have been directed at their main target: the peoples, organizations and collectives that resist and defend life.

The death projects promoted by capitalism, when confronted by collective resistance, use the State to create decrees and send its repressive forces against those who oppose the exploitation-destruction of nature and the dispossession of territories and the communal patrimony of native peoples.

The illusion of development and progress vanishes when the peoples exhibit the death and brazenness with which the companies and the states dispossess the territories, and in the absence of arguments to justify themselves they use violence in all its forms.

In the face of this war imposed by capitalism, the peoples respond with resistance, autonomy and organization.

In this long journey towards a just world where life is assured for our future generations, the paths that we comrades have been building with pain and rage are gradually meeting, until they form a beautiful fabric that covers the whole world with color and dignity.

The roar of the peoples who resist is long and great and that roar has the capacity to awaken rebellion and organization in every corner where there is injustice and exploitation, that is to say, in every corner of our world.

That is why today, the peoples, organizations and collectives of Puebla, Tlaxcala, Veracruz, Mexico City, Mexico State, Morelos, Oaxaca, Guerrero and Querétaro once again sound our channels of rebellion and call on the indigenous peoples, nations and tribes of Mexico and the world, as well as allied organizations and collectives to join this “Caravan for water and for life: Peoples united against capitalist dispossession” that will begin on March 22 in the lands of the municipality of Juan C. Bonilla, Puebla and will end on April 24 in the community of Cuentepec, Morelos.

During 34 days the Caravan will make visible the struggles of these nine states of Mexico as well as territories in the rest of the country, in Europe, Africa, Asia, South America and North America, and along the way new paths of organization will be traced to jointly resist the onslaught of this capitalist system and its protector states. But above all, it will echo the voice of the peoples who have already decided their destiny through their own laws, pronouncements, decrees and agreements that the bad governments have scorned and ignored.

In other words, the Caravan for Water and Life aims to enforce the Law of the Peoples.

Never again a Mexico or a world without us

We will not be defeated!

Otomi Community Residents in the CDMX

Coordination of Peoples, Original Neighborhoods and Colonies of Xochimilco

Metropolitan Anticapitalist and Antipatriarchal Coordination with the CIG

Unification of Peoples and Colonies Against Mining in Morelos

Peoples’ Front in Defense of Land and Water, Morelos, Puebla and Tlaxcala

Front in Defense of the Matlazica Valley

The Isthmus is Ours

Comrades in Solidarity from Germany and Sweden

*To add signatures to this call and/or participate in the caravan, write to caravanaporelaguaylavida@gmail.com