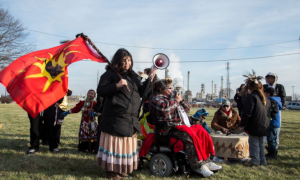 My name is Vanessa Gray. I am an Anishinaabe Kwe organizer, community researcher, and Land defender from the Aamjiwnaang First Nation.

On November 21st 2021, Canadian Pacific Railway Police Service issued charges against me in connection to an action that was organized in Toronto, in response to the violent raids in Wet’suwet’en territories. This event was attended by hundreds of people. The charges included three counts of mischief, interference with property, causing disturbance, loitering, unlawful assembly, trespassing, and failure to give way.

I turned myself in on December 3rd 2021 and I was released under conditions imposed by the Canadian Pacific Railway Police Service. Today I would like to share that all charges against me have been dropped.

The trauma of wrongfully being arrested does not go away for Indigenous peoples when charges are dropped. Canada is a genocidal nation-state that claims reconciliation while its government uses militant forces against Indigenous people in the name of Canadian economic growth.

Canada continues to wrongfully target and arrest Indigenous community members for showing our solidarity with one another and enacting our responsibilities to protect our land. The criminalization of Indigenous land defenders is a strategy to enforce the colonial law that is fueling war and the climate disaster our present and future generations face. Gary Wassaykeesic still faces charges of trespass and mischief for attending the same event I was charged for.

I urge everyone to continue to support Indigenous frontline communities who experience and stand up against the daily destruction of our homes on our native land. I stand with Wet’suwet’en Matriarchs who continue to face police violence for protecting their unceded territories and the clean drinking water of the Wedzin Kwa. Canada is still forcing projects through their territory and it is Canada’s responsibility to stop and end the brutal police evasion on the Yintah.