by Sandra Cuffe / The Intercept 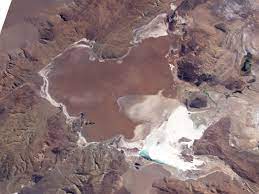 CRISTÓBAL POP VIVIDLY remembers when the lake suddenly turned red. Indigenous Maya Q’eqchi’ fishermen depend on Lake Izabal, Guatemala’s largest lake, for their livelihoods, and Pop had just been elected president of the local fishers guild when the water changed color.

“It had a bad smell,” said Pop, sitting in the shade outside his wooden home in the town of El Estor, nearly 200 miles northeast of Guatemala City. The rust-colored patch of water stretched for more than a mile in front of town. “Our life is fishing, and we did not know what was going on. There were many rumors about whether the fish would be affected by what was happening.”

The Fenix nickel mine, owned by the Switzerland-based Solway Investment Group, is located just three miles from El Estor. The fishers guild demanded answers. “We wanted things to be done transparently,” said Pop, recalling how he and others urged the government to disclose water testing results publicly. When that didn’t happen, guild members began protesting the mine in May 2017, and a Q’eqchi’ fisherman named Carlos Maaz was killed in the ensuing crackdown by national police.

Guatemalan authorities eventually attributed the discoloration to an algae bloom, but the chain of events it set in motion is still unfolding. Legal action by the fishers guild resulted in the court-ordered suspension of the mine’s license pending consultation with affected Indigenous communities. Protests over Q’eqchi’ representation in the consultation last year concluded with a declaration of martial law and raids of the homes of local journalists and outspoken mine opponents, including Pop. Following the contested process, the government reinstated the mine’s extraction license.

That is the known story, but a global investigation exposes another story lurking beneath the surface.

Journalists reporting for The Intercept and 19 other media organizations in Europe and Latin America joined forces to investigate the Fenix nickel mine; Solway; and the conglomerate’s two Guatemalan subsidiaries, Pronico and CGN, by their Spanish acronyms. Coordinated by Forbidden Stories, a nonprofit organization based in France, the “Mining Secrets” partners examined a leaked trove of millions of internal documents and emails belonging to Pronico.

Solway’s subsidiaries failed to report pollution and used a host of troubling methods to exert influence over local politics and repress dissent, the investigation found. Among the contamination incidents documented in the leak was a massive discharge of sediments into Lake Izabal around the time the water in front of El Estor turned red. Company personnel and intermediaries used bribes, coercion, and other tactics to manipulate the positions of community councils toward the Fenix project. The investigation also uncovered details on funding and cooperation between the mine and state security forces, whose roles in human rights violations have often been intertwined.

After “Mining Secrets” partners published a series of articles, Solway rejected “false accusations” and questioned the authenticity of source documents. On March 15, the company announced it would launch a board-led investigation into the allegations.

Carlos Ernesto Choc, a local Q’eqchi’ journalist, has been reporting on the mine for years. His ongoing criminalization led Forbidden Stories to include the Fenix project in its 2019 coverage of multinational mining operations in countries where journalists faced persecution for their work. Two years later, a group of hackers provided Forbidden Stories with access to the trove of Fenix records, precipitating the “Mining Secrets” investigation.

The Fenix project is comprised of mountaintop mining carried out by CGN and a lakeside processing plant operated by Pronico. Processed ferronickel is trucked to Guatemala’s Caribbean port, exported to Europe and beyond, and used primarily in stainless steel. The mine was briefly operational in the late 1970s and spent decades under Canadian ownership before Solway acquired the project in 2011. At the time, Solway was widely acknowledged to be a Russian company. It is now based out of Zug, a known tax haven in Switzerland, and maintains it has no Russian ownership or capital.

Guatemalan authorities and Solway’s subsidiaries have long denied that mining operations had anything to do with the discoloration of Lake Izabal in 2017. But internal documents included in the leak call this public narrative into question. CGN and government inspectors both documented a flow of rust-colored sediment entering the lake from the mine site around the time the water turned red, and emails exchanged by Pronico managers explicitly identified the mine as the source.

Fishermen in El Estor, many of whom already suspected that mine pollution was affecting their catch, first spotted signs of discolored water toward the end of February. Not long afterward, the discoloration caught the attention of environmental regulators. One of many government documents found in the leak is a March 6 letter written by Maritza Aguirre, director of the agency responsible for monitoring Lake Izabal. Aguirre notified the director of legal compliance at Guatemala’s Ministry of the Environment and Natural Resources that inspectors had found “red-orange color water being discharged” from a mining project exit channel into the lake.

On March 11, CGN issued an internal inspection report complete with photographs. “The release of sediments in the lake was evident due to the reddish color of the water,” the report noted. “The contrast in water color can be seen from far away.”

Within days, Pronico email exchanges identified the mine as a source of the sediments. In a March 15 email to colleagues, Pronico’s then-environmental manager noted that they needed to “work on a proposal to resolve and mitigate the issue of sediments coming from the mine” as instructed by Pronico’s then-general director. An email the following day notified the environmental manager of work plans “to mitigate the pollution coming from [extraction] area 212.”

When pressed, Pronico acknowledged the existence of the CGN inspection report but stated that the sediment did not come from the mine but from rains above the extraction areas that followed their natural course through the Fenix site and into the lake.

The Ministry of the Environment also acknowledged the red-orange discharge but maintained it was not connected to the discolored water along the town shoreline. “It had to do with a type of earth and minerals in that area,” Carlos Castañeda, director of environment and natural resource management, said of the sediment. “It is likely it was due to the reddish color leachates, which do not mean they are pollutants or that they originate precisely from the mine.”

In the end, both the company and government have stuck to the official story: Botryococcus braunii, a micro-alga, caused the discoloration of the water along the shore of El Estor in 2017. Government and university labs found the micro-alga when they analyzed water samples taken by the lake monitoring authority. The studies were never made public, and neither were any of the reports on the flow of sediment into the lake around the same time.

Javier Márquez is not sure he trusts the government lab results. He’s the executive director of Defenders of Nature, an environmental foundation that manages several nationally protected areas in Guatemala, including a wetlands area west of El Estor where the Polochic River feeds into Lake Izabal. Foundation personnel take part in governmental water monitoring and occasional mine inspections. But Márquez said the monitoring is woefully lacking.

While he believes the mine has failed to adopt adequate environmental measures, “the government is more to blame for not demanding implementation,” said Márquez. “The actions of the Ministry of the Environment worry me. They are the ones truly responsible for monitoring and stopping all these bad practices.”

Less than a year after the fishers guild took to the streets over the lake turning red, another swath of discolored water showed up near the mine site. Pronico’s environmental manager attributed it to “a great quantity of suspended sediments” in a report prepared for the company’s general director. The sediment “originating in the mine area” eventually drained into the lake, according to the April 2018 document, which also noted that sediment had been accumulating on the lake floor over several years of mining operations.

“No Record of the Spill”

Under Guatemalan law, the crime of industrial pollution involves “pollution of air, soil or water” in the course of commercial or industrial activity, including “discharging products that could harm people, animals, forests or plantations.” The crime is punishable by two to 10 years’ imprisonment.

An internal Pronico brief analyzing the company’s legal exposure also stated that government institutions found no environmental impacts, but not because there weren’t any. “Ministries have no record of the spill. They have no evidence,” noted the document, which Pronico’s environmental manager prepared for company president Dmitry Kudryakov. The apparent aim of the October 2016 document was to assess what Guatemala’s Public Prosecutor’s Office, Ministry of the Environment, and Ministry of Energy and Mines might be able to prove about the incident.

The explosion resulted in a spill of bunker fuel, lubricant, and process water into Lake Izabal, the document indicated, but regulators were in the dark. “Ministries had to have carried out water quality monitoring in Lake Izabal. They did not do it,” the document stated. “Ministries do not have equipment to carry out dust and emission monitoring.” The government agency responsible for monitoring wildlife, meanwhile, “does not have capacity of time or resources.”

The document concluded that prosecutors could attempt to bring industrial pollution charges against company representatives, which could entail a jail sentence and fine.

The details of another bunker fuel spill in November 2020 can be pieced together from several documents in the leak. An estimated 13.5 tons of fuel were cleaned up after the spill contaminated soil and water. At one point, those involved in the cleanup efforts ran out of the absorbent materials used to remove the fuel and resorted to using clothing. Risks associated with the spill included criminal prosecution and fines, according to environmental team presentations in the months following the incident.

Aguirre, director of the Lake Izabal monitoring authority, said she did not think any major environmental incident would escape notice given the vigilance of community residents and civil society groups. Still, companies engaged in industrial activity “have the obligation to report any incident that occurs related to environmental issues to the Ministry of the Environment,” she said.

The environmental crimes bureau of the Public Prosecutor’s Office “is ready to proceed with a pertinent investigation if a new formal complaint is filed or if there is knowledge of possible pollution,” a representative of the office told the Forbidden Stories consortium.

[Read the rest of this article at theintercept.com]