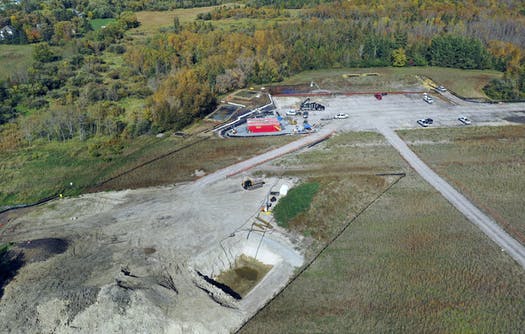 While working near Clearbrook, Minn., Enbridge dug too deeply into the ground and pierced an artesian aquifer. This image is from the site on Sept. 28, 2021.

“The DNR continues to work on a comprehensive enforcement resolution, with the goal of addressing restoration, mitigation and additional penalties associated with the three breach locations,” the agency said in a statement Monday announcing the completion of its investigation into the aquifer breaches.

The first breach occurred during the winter of 2021 at a major pipeline junction near Clearbrook, Minn., although regulators did not learn about it for several months. About 50 million gallons of groundwater flowed out from that rupture, endangering a rare wetland area nearby called a calcareous fen.

Enbridge has paid more than $3.32 million related to the first violation and the State Attorney General’s Office has been reviewing the incident for potential prosecution. The company announced in January, about one year after crews first punctured the aquifer, that it had finally stopped the flow of groundwater at that site.

The DNR learned about a second breach Aug. 5, the agency said Monday. The breach occurred a few days earlier near LaSalle Creek in Hubbard County and discharged an estimated 9.8 million gallons of groundwater. That flow also has been stopped, the DNR said. 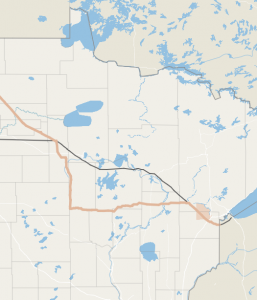 Enbridge crews punctured three aquifers during Line 3 construction last year. Here’s a look at where they are along the pipeline construction route.

The DNR said it learned about the third breach Sept. 15, about five days after it was identified. That rupture occurred about 400 feet west of the Fond du Lac Band’s reservation boundary, south of Highway 2 and east of Highway 73. It was once gushing about 330 gallons of groundwater per minute but the flow has been reduced to about 6 gallons per minute, according to the DNR.

All three aquifer punctures involved sheet piling to stabilize trenches for the pipe. Repairs at all three sites have involved injecting a grout mixture into the ground to stop flows, said Juli Kellner, a spokeswoman for Enbridge.

Enbridge has repaired two of the three puncture sites. Repairs at the site affecting the Fond du Lac Band are nearing completion, she said. Most of the groundwater that flowed out was immediately drained back into the landscape, Kellner said.

“Enbridge takes protecting the environment seriously. We regret this happened and are taking steps to improve our procedures to prevent this type of occurrence in the future,” Kellner said.

“The Band is currently assessing all options to ensure that Enbridge mitigates and repairs damages arising from the breach,” the band said in its statement.

All the necessary state and tribal agencies have approved corrective action, it said. The DNR posted a 391-page corrective action plan, dated Feb. 15 and prepared by Barr Engineering, on its website.

Pipeline opponents, including environmental groups and scientists, expressed frustration with the DNR’s findings.

“I’m shocked at the volume and I’m shocked that we didn’t know exactly what was going on,” said Frank Bibeau, a lawyer for the White Earth Band of Ojibwe. Bibeau said he thinks repeated warnings about problems doing such construction in northern Minnesota’s watery landscape were ignored during contested case proceedings. “It’s very, very sad to think, ‘How many times do yo have to keep telling the same story?'”

Winona LaDuke, head of Honor the Earth and a leading Indigenous voice in the fight against the Enbridge pipeline, said it’s a “shame” that the state has not prosecuted the company when hundreds of Minnesotans who demonstrated against Line 3 were arrested and charged with crimes.

“Enbridge has behaved criminally in the state of Minnesota,” LaDuke said.

Steve Morse, executive director of the Minnesota Environmental Partnership, called the breach near Fond du Lac “pretty massive.” He said he is frustrated that it took so long for information about the ruptures to come out. His organization and at least one lawmaker repeatedly have asked state agencies for more information, he said.

“Why do we wait months and months for this simple information? Who are they protecting?” he asked. “They are hiding behind the data practices law.”