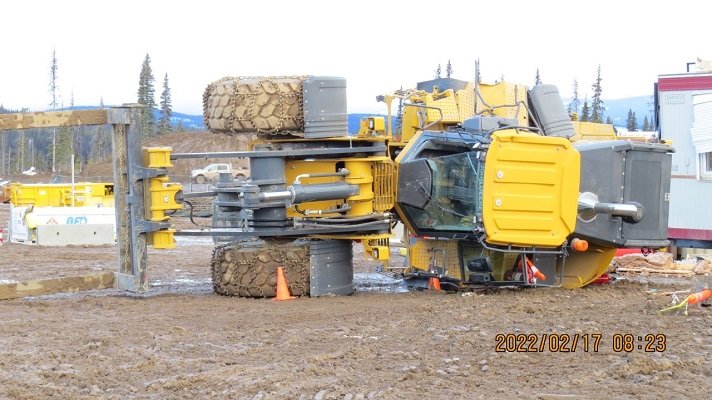 On February 17 the Coastal GasLink drill pad site by the banks of the Wedzin Kwa (morice river) was seriously damaged by an unknown group of courageous individuals. As anarchist individuals living in the North who are supportive of struggles in defence of the land and against ongoing colonization by canada and its corporate interests we declare our support for this action and encourage others to do so.

While we don’t know exactly what happened that night we can study the statements by CGL and the RCMP to read through the bullshit and get some picture. It seems undeniable from the photos that tremendous property damage was done: Vehicles used by the ex-cop ex-military mercenary Forsythe Security were damaged (the so-called poor traumatized “CGL workers”) and machines and trailers were trashed almost certainly by means of commandeered CGL heavy machinery. Other claims by CGL and the pigs are unsupported by their facts and are almost certainly bullshit: “Workers” themselves were clearly not the subject of attack since all damage was limited to vehicles and buildings and ceased as soon as security left the site. The supposed attempt to set a vehicle on fire with a security guard inside is nothing but conjecture and nonsense. In a video interview CGL released with the mercenary involved he made that claim based on the fact that a flare landed in the back of his truck while he attempted to force his way through land defenders back to the drill pad after having been expelled. Hardly seems like an attempt at lighting a vehicle on fire and in the context clearly a defensive act. Throughout the incident it seems clear that force was only used as necessary to scare CGL security into leaving so that the real work of demolishing CGL’s infrastructure of violence could begin. The axe-murderer narrative hardly stands up to their own facts!

Let’s talk for a minute about the RCMP’s claim about officers being led into a trap and injured. They claimed that they were met with projectiles while attempting to dismantle a blockade and that they then charged in the dark through the road block at which point one of them stepped on a spike board. Spike boards are defensive instruments used to stop vehicles from ramming through road blocks. Rather than their “lulled into a trap” spin this sounds like a defensive action in which people tried to stall a likely-violent police response, only used projectiles when it became necessary to defend the blockade and in which the only police injury was self-inflicted by an officer running through the dark into an unknown situation. Given the history of RCMP police violence in the region and their deployment of assault rifles, attack dogs and use of torture against land defenders it seems clear that this “violence” was defensive in nature and protected people from the far more serious violence the RCMP would reasonably be expected to have done to people if they’d reached the drill pad.

What we are left with is this: After years of trespassing and violating consent, after three militarized RCMP raids at the service of CGL, after years of harassment and intimidation of land defenders by CGL’s Forsythe security and after more peaceful methods had failed to stop CGL’s continuing violence against the land and indigenous relationships and laws some unknown individuals struck back with an impressive act of sabotage and destruction against corporate property. There is a very big difference between violence against property and violence against people and life and compared to the violence that CGL and the RCMP have been unleashing this action at the drill pad seems restrained, proportional and commendable.

We see this action as a natural outgrowth of the ongoing resistance against CGL and not in any way unprovoked or unexpected. While we don’t want to make assumptions about who was responsible we think it’s reasonable to believe this was undertaken by people acting in defense of the land and river. That is why we have referred to them as land defenders. May others continue this fight, take action against CGL, canada and on-going colonization where they stand and draw inspiration and courage from this action as we do.