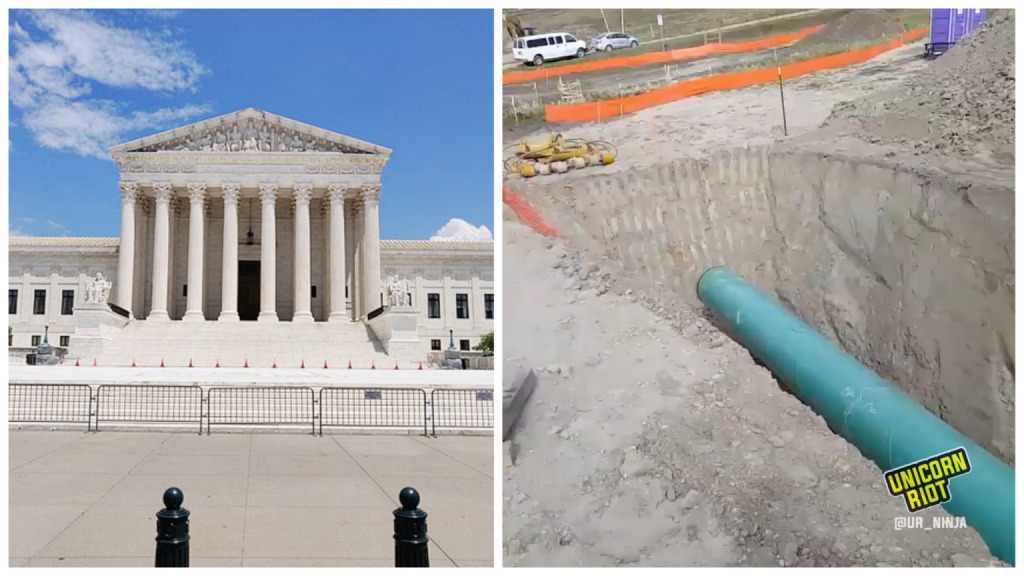 Washington, DC – Today the United States Supreme Court declined to hear an appeal brought by Energy Transfer, the energy giant behind the highly contested Dakota Access Pipeline (DAPL). This means that the existing federal court decision in the case, which found the pipeline was illegally permitted, will stay in effect.

DC District Court Judge James Boasberg ruled in 2017 that the Army Corps of Engineers failed to conduct an adequate Environmental Impact Statement (EIS) for the massive pipeline project as required by law. A new EIS process was initiated in September 2020 and is still underway.

In 2020, Boasberg ruled that the pipeline was permitted illegally and violated the National Environmental Policy Act (NEPA). Boasberg’s 2020 ruling also called for DAPL to be emptied of oil and cease operations within 30 days. However, the shutdown order was soon vacated by the U.S. Court of Appeals for the District of Columbia Circuit, which decided that the pipeline could continue operating but that additional environmental reviews were still needed.

“The litigation concerning the pipeline is over, but the fight continues.  We call on the administration to close the pipeline until a full safety and environmental review is complete. DAPL never should have been authorized in the first place, and this administration is failing to address the persistent illegality of this pipeline.”

In court filings, Energy Transfer has complained that rulings leave DAPL “vulnerable to a shutdown” in the future despite the federal appeals court overturning Judge Boasberg’s shutdown order.

In 2016 and 2017, thousands of people converged to protest and commit civil disobedience along the pipeline route near the Standing Rock Sioux Tribe reservation in southern North Dakota. Standing Rock tribal members have long held that a potential leak from the pipeline where it crosses under the Missouri River would threaten their water supply. Since beginning operations in 2017, the pipeline has leaked several times in both North Dakota and South Dakota.