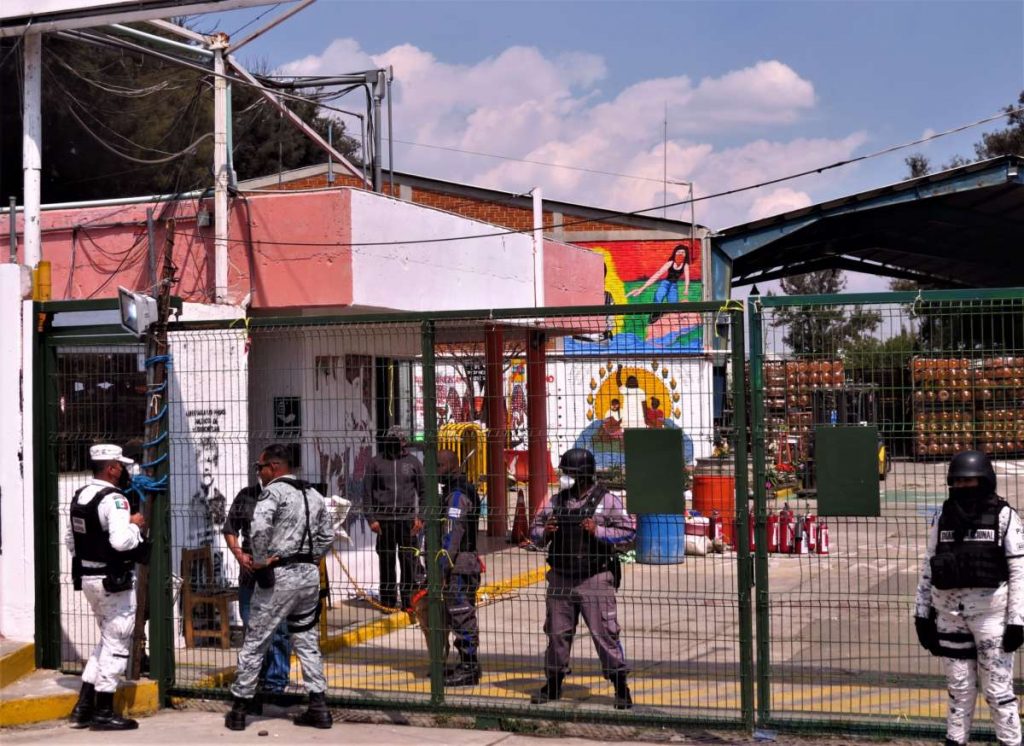 Around 300 Mexican National Guards and state security forces violently evicted Indigenous environmental activists from their community center in Puebla this week, on the morning of February 15.

The community center had been a foreign-owned water bottling plant for decades, until Indigenous Nahua people in the area took it over 11 months ago. The incident is being understood by many as a demonstration that the Mexican government puts big business first.

On Sunday, just two days before the security forces seized the space, which the activists had renamed Altepelmecalli (meaning “House of the People”), the Indigenous organizers had begun plans to request that the space be expropriated from its former owner — Bonafont, a water company owned by the multinational corporation Danone.

But at 1:20 am, under the cover of darkness, the security forces arrived, blocked the road in front of the factory, entered by force, threatened those inside, then removed them and tore down the protest camp and kitchen and dining area that was set up out front, according to the activists.

Twenty Indigenous Nahua communities make up the United People of the Cholulteca Region movement, which had reclaimed the former water bottling plant in order to use it for community projects. They told the press on Tuesday that the military seizure of the area was a breach of Indigenous self-determination, which is enshrined in the Mexican Constitution.

Danone is a multinational food giant headquartered in Paris. Its annual revenue is around $30 billion per year. Bonafont, one of Danone’s brands, had been illegally and excessively extracting local water in the Indigenous region of Puebla state, in order to bottle it and sell it for a profit. The United People initially closed the Bonafont plant in March 2021, in order to stop the water extraction, then took the plant over and ran it as a community space with various agroecological and social projects.

There are thousands of water-bottling and purification plants in Mexico, and Danone, Coca-Cola and PepsiCo are the main beneficiaries of the market, with 82 percent of it. Here in Puebla, Nestlé Water and the U.S. company Keurig Dr Pepper also bottle water, with Nestlé helping itself to spring water of nearby volcanoes. The companies pay around 2,600 pesos ($127) per year for each water extraction concession and make 494 times what they spend when they sell bottled water, while locals don’t benefit at all.

The Cholulteca region has a high rate of poverty, with most people working as farmers or for factories and industrial plants. Over the last few decades, foreign and local companies have industrialized the area, taking advantage of cheap labor and resources like water. A major Volkswagen plant is around 10 kilometers away and has caused environmental damage with hail cannons. Local farmers say that the technology, which uses sonic blasts to alter weather patterns, has devastated hundreds of hectares of crops.

Last year, the region made international news when a massive sinkhole opened up down the road from the former Bonafont plant. “Academics worked with us and made it clear that the sinkhole was a result of the plundering of water by these companies,” Bertha, an activist with the United People, told Truthout.

The sinkhole demonstrated “what [Indigenous] people had been saying for years, that the extraction of water and the pollution of our rivers, air and territory, in general, was leading to a really severe situation,” Campeche, another activist with the United People, told Truthout. (Both Bertha and Campeche requested only their first names be used in order to protect them from retaliation.)

The Politics of Water

After the events of Tuesday morning, the Puebla state governor claimed the military takeover was the result of a warrant from the Federal Judiciary of Mexico, and he called for dialogue between the activists, Bonafont, and the state and federal governments. The United People, however, had invited him, other authorities and the company to dialogue on various occasions, but no one ever showed up, according to activists.

In a press conference on Tuesday afternoon, United People accused Mexico’s president, Andrés Manuel López Obrador, of coordinating with state and municipal governments to defend Bonafont and Danone and to “strip the people of their water.”

Such coordination was evident, they said, in the way the national guard, state and local police forces worked together to evict them from Altepelmecalli. 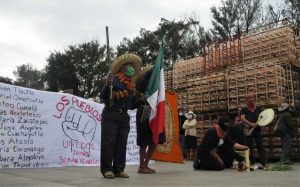 “This shows that the state serves private interests and the armed forces only exist to repress organized people,” United People said.

They pointed to the repression of other movements in Indigenous regions of Istmo de Tehuantepec, Ayotzinapa, Mactumatz and Nahuatzen this week alone, and the murder of a fellow activist, Francisco Vázquez, a few days ago in Morelos.

“What this shows is that we are in a global war for water, which is against the people and all of humanity,” United People stated.

Life as a Cause

When Truthout talked to Bertha just a few days before the military seizure of the space, she said, “We’ve changed a place of destruction into a place of life. We have farm animals here, meetings, cultural events, national forums. We provide health care and workshops, and have productive projects so we can be self-sustaining.”

The space also had a media center equipped for community television broadcasting, and a women’s rights organizing area. So far, the activists say they don’t know what the security forces have done with all their animals, tools, computers, cameras and library of books.

“We closed the company … so they couldn’t steal one more drop of water from us…. As Nahua people, we have been building our own way of life for a very long time,” Campeche explained. He said the arrival of foreign companies and other factors had made that difficult, so it was significant when 20 different communities came together to shut Bonafont down.

“In assemblies, people said that what they needed was a place for health care, education and trade-based workshops, so that’s what we did with the old Bonafont plant,” he said.

“Our aim was that this space, where there had been plundering of resources and exploitation of workers … be transformed into a collective space where life is built and created.… It’s been 11 months and we have faced some challenges, but we have addressed them as a community,” Campeche concluded.

On Tuesday, Bertha told Truthout, “We’re going to keep going, keep organizing. Maybe not in that physical space, but we’ll keep everything that we achieved alive.”

At their press conference, the United People declared that they were willing to reclaim what belonged to them, “as we have had to do throughout history.”

“They think that by seizing Altepelmecalli, they will beat us. But we, the Nahua people of the Cholulteca region, tell them that we won’t give up, we will continue to defend our water and life,” the activists stated.

They called for local and global protests outside Mexican embassies and Danone buildings, and declared they would wage a “permanent campaign of mobilization, boycott and sabotage against Bonafont” and Danone.