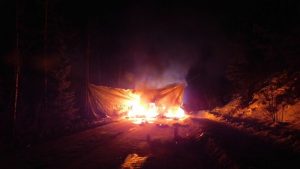 A flaming barricade was set up on the forest access road leading to the drill site shortly after midnight on Feb. 17

It happened shortly after midnight this morning (Feb.17) on the Marten Forest Service Road.

“It was reported approximately 20 people, some armed with axes, were attacking security guards and smashing their vehicle windows. It was initially reported that some CGL workers were trapped, but all had managed to safely leave the area,” says the RCMP.

When police arrived at the 41 km mark, RCMP say “the roadway had been blocked with downed trees, tar covered stumps, wire, boards with spikes in them, and fires had been lit throughout the debris. As police worked their way through the debris and traps, several people threw smoke bombs and fire lit sticks at the police, injuring one officer.”

At the 43 km mark, an old school bus blocked the road. No one was located in this area and with the assistance of CGL, the bus was cleared from the road and police continued on. 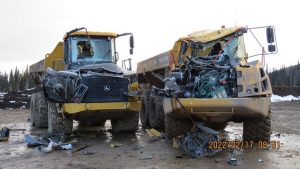 The saboteurs disappeared into the night, evading arrest

When police arrived at the drill pad at the 63 km mark, they found significant damage had been done to heavy machinery, fencing, and portable buildings. Police did not encounter any further blockades or protestors as they made their way to the drill pad nor did they locate anyone at the site. The cost of damage done is extensive as seen in the photos.

“This is a very troubling escalation in violent criminal activity that could have resulted in serious injury or death. This was a calculated and organized violent attack that left its victims shaken and a multimillion dollar path of destruction, says Chief Superintendent Warren Brown, North District Commander.

“While we respect everyone’s right to peacefully protest in Canada, we cannot tolerate this type of extreme violence and intimidation. Our investigators will work tirelessly to identify the culprits and hold them accountable for their actions.”

In a statement, CGL says its workers were shaken and are looking forward to a full investigation of this matter. 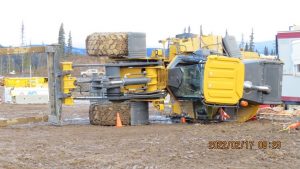 “On behalf of our workers, we encourage a full investigation of those involved in the violent attack. The company is also asking for anyone with information about the attack to contact the RCMP.”

CGL also notes that their work is “lawful, authorized, fully permitted and has the unprecedented support of local and Indigenous communities and agreements in place with all 20 elected First Nation councils across the 670 km route.”

The company adds the project is almost 60 per cent complete.