From It’s Going Down 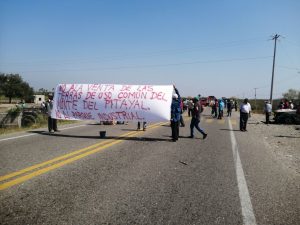 Below we publish two translated communiques from the Indigenous Binnizá community of Puente Madera, in the Isthmus of Tehuantepec, Oaxaca, who are engaged in a struggle in defense of their communal lands against the construction of an industrial park, part of the Interoceanic Corridor megaproject being pushed by the AMLO administration

To the Indigenous Peoples, Organizations, and Collectives of the Isthmus of Tehuantepec

To the Isthmus People

As the community in resistance of Puente Madera, alongside those who organize from within the Assembly of Indigenous Peoples of the Isthmus in Defense of Land and Territory, we denounce the following:

On Friday February 4, 2022, residents of Puente Madera went to the Pitayal where we found two people from our community, Marcos Peza Manuel and Floralia Morales Hernández, fencing off part of our common use land. These persons claimed to have titles of possession. We explained to them that their actions were illegal and violate our communal property. The use of common lands must be decided upon by a community assembly, the last of which was held on March 14, 2021. In that assembly, they tried to impose a decision in favor of an industrial park, with a supposed agreement reached by the assembly signed by dead comuneros and people who weren’t present at the assembly. This agreement is currently under revision in the Tuxtepec Agrarian Court, where a lawsuit was filed to nullify this supposed agreement due to irregularities in the assembly and the agreement emanating from it. This lawsuit names responsible the commissioner, security council, municipal authorities, and the ex-representative of the Agrarian Court of Tehuantepec, for being part of this imposition process.

Likewise, on Wednesday January 9, in an interview with Mariano de la Rosa Jiménez, ex-compañero of struggle and resident of our community, he explained his current position in favor of selling an extension of Pitayal lands for the industrial park, having received offers from ex-municipal and agrarian authorities to divide and antagonize the community. Interestingly, this same Mariano de la Rosa Jiménez, together with other compañeros, is facing a criminal lawsuit filed by the Secretary of Communications and Transportation based on a complaint filed by the former municipal trustee.

We reiterate that since May 15, 2021, in the agrarian community of San Blas Atempa, we have not had agrarian authorities. Since March 14, 2021, there has not been another assembly, increasing the climate of division and conflict generated by the ex-authorities already mentioned, the Agrarian Attorney, and political groups who want to benefit at the cost of our community and our territory.

Our concern for and rejection of industrialization for the Interoceanic Corridor is based upon widely documented events in various regions of the country, the closest being the Minatitlan-Coatzacoalcos Corridor. Less than 40 years after its implementation in the lower basin of the Coatzacoalcos River (already declared as a “dead” river by experts), it has been converted into the area most contaminated in soil, water, and air in the entire country, with serious consequences on the regional climate and the health of the inhabitants and Indigenous communities. 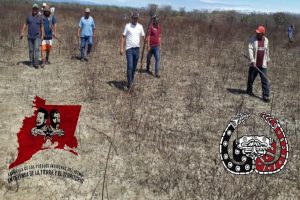 If industrialization continues in the Isthmus of Tehuantepec (an area of great biological, ecosystemic, and cultural diversity), pollution would worsen, increasing global warming and affecting the health of the people. It would also compromise the basic necessities of the inhabitants and people of a wide portion of the south-southeast of our country, as well as the life of future generations.

For this, as a community we have undertaken the struggle in defense of our natural resources against the imposition of the industrial park project corresponding to the Pole of Development and Well-being (PODEBI) in the Pitayal, which aims to destroy a living and common use space where we go to search for resources for our daily subsistence.

For all of the above, we declare ourselves on maximum alert and we announce that we will begin a series of actions to monitor and defend the Pitayal. We will also continue filing the necessary legal resources against those who threaten our common lands and territory.

We hold the previous agrarian and municipal authorities responsible, along with the current state and federal authorities, for whatever intimidation, threat, or aggression carried out against those of us who defend our land, territory, and rights.

Our Struggle is for Life

Never More a Mexico Without Us

Community in Resistance of Puente Madera

Community Assembly in Resistance of Puente Madera on Maximum Alert

“We head into the violent struggle without making it our ideal. Our violence would have no object without the violence of despotism, nor would it be justified if most of the tyrant’s victims were neither consciously nor unconsciously complicit with the present unjust situation.”

To the Indigenous Peoples, Organizations, and Collectives of the Isthmus of Tehuantepec

To the People of Oaxaca, Mexico, and the World Who Struggle and Resist for Life

To the Combative Section 22

To the Feminist Movement of Oaxaca, Mexico, and the World

To the Student Organizations and Collectives

To the Isthmus People

Maximum alert amidst an intrusion attempt on common use lands of the Pitayal.

This morning, February 12, people connected to the Interoceanic Corridor megaproject, protected by elements of the Municipal Police of San Blas Atempa and the Agrarian Attorney, tried to enter the common use lands of the Pitayal, a site protected by the Binnizá community of Puente Madera, where they seek to install one of the Poles of Development for Well-being (PODEBI) associated with the Interoceanic Corridor, promoted at all cost by the government of the so-called Fourth Transformation (4T). As a consequence of this invasion, community members of the Pitayal took legitimate action for the protection of their collective lands.

The climate of tension in our community began on February 10, when Marcos Peza Manuel and Floralia Morales Hernandez, people linked to the PODEBI, began actions of deforestation and fencing of the Pitayal, arguing to have “valid” proof of their possession of the lands. From that day on, the community in resistance of Puente Madera declared itself on maximum alert for the protection of the Pitayal.

Various governmental vehicles were set ablaze today during a highway blockade in defense of the Pitayal near Puente Madera in the Isthmus of Tehuantepec, Oaxaca

These actions are part of the current state of violence we are living through in the region. With elections for state governor coming up, the interest in promoting infrastructure projects on our territories increases the use of violence from all three levels of government on those of us who defend our ancestral lands. The lie that the poles of development will bring employment and betterment to our region has been promoted indiscriminately by the federal, state, and municipal governments, through processes of Indigenous consultation that ultimately serve to mask the dispossession and destruction of our environment.

Those of us who are part of the resistance in defense of the Pitayal, we reiterate that the violence comes from the state, and is exercised by professional politicians led by MORENA. All political parties are the same, they exclude us, don’t listen to reason, and seek to exploit and dispossess us of our lands which we inhabit and defend. Violence comes from the state which slanders those of us who say NO to the sale of the land. They add peoples of our community to their ranks in exchange for money. They move these projects forward with false assembly agreements, fraudulent documents, and promises of progress and development, grounded in a logic of indigenismo, generating an atmosphere of intercommunity division.

Our Struggle is for Life

Never More a Mexico Without Us

Community in Resistance of Puente Madera

Assembly of Indigenous Peoples of the Isthmus in Defense