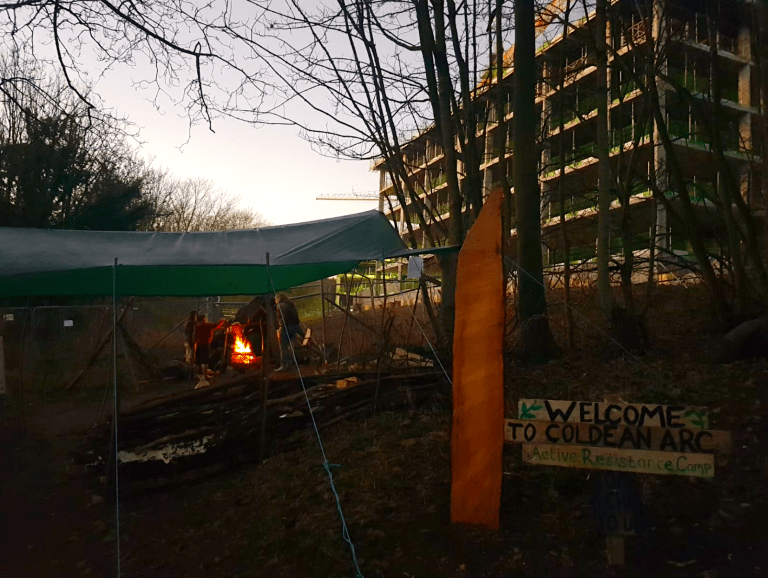 A month ago, just after New Year, a group of youth climate activists took land on Coldean Lane in Brighton. They put up a treehouse in opposition to developers plans to fell healthy trees and destroy active badger setts. Calling the camp ARC (Active Resistance Coldean) and maintaining a presence round the clock it looked at first as if they might have achieved a quick victory.

The 242 unit development (foisted on Brighton council by the National Planning Inspectorate) is already mostly complete. However the main drainage for the site through the south eastern corner cuts through a small copse that’s still a wildlife haven. Under one sycamore is the only remaining badger sett of the original seven that have been destroyed to make way for the housing.

Just a week ago developers made sympathetic noises about re-routing the drainage but those hopes were dashed in yesterday’s (2nd Feb) council planning meeting. Activists in badger masks packed the public gallery shouted and beat drums as it was announced that the original drainage route remains unchanged. One activist told Freedom “This is typical Brighton Council, off its tits and in bed with the same old rich bastards. This is a stinking incompetent mess”. 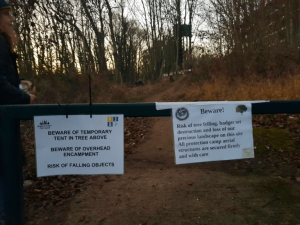 Brighton&Hove’s City plan, mandated by central government, requires the Council, now run by the Green Party, to build a minimum of 13,200 new homes. Campaigners claim that could easily be done on existing brownfield sites. However plans have been drawn up that will see extensive construction on Brighton’s narrow green belt.

To find out more, get involved or support please head here.