by Helana Horton / The Guardian 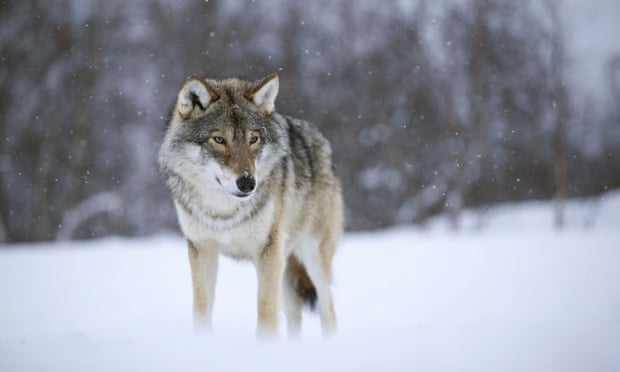 A European grey wolf in Norway. About 80 wolves are thought to live in the country. Photograph: blickwinkel/Alamy

Norway has halted a major hunt of wolves after campaigners secured a court injunction.

Twenty-five animals, within four packs, are in the “wolf zone”, an area of nature set aside to protect the predators, and these have been given a stay of execution by the courts after campaigners argued wolves in a conservation area should not be shot.

At the start of this month, 51 wolves were due to be slaughtered after pressure from the hunting and farming lobbies in the country – a significant proportion of the 80 animals thought to live in Norway.

“The wolves are saved for this year, as the hunting season only goes on for two more weeks and then it is the breeding season, when they cannot be shot,” Siri Martinsen, the chief executive of the animal rights organisation Noah, told the Guardian.

The Guardian reported in January that conservation groups across Europe were appealing to the EU to take action against wolf population culls in Norway, Sweden and Finland, arguing that the Nordic nations were creating the most hostile environment for wolves in western Europe and flouting laws that protect the species.

The wolf is on Norway’s “red list” of endangered animals, so the government has set up a “wolf zone” – comprising 5% of Norway’s territory – where the animals are free to roam without being persecuted.

Three environmental organisations – Noah, WWF Norway and Association Our Predators – argued that killing the 25 wolves in the conservation zone would be a breach of European environment law, and secured an injunction until this could be debated.

A similar issue cropped up in 2020, when Noah took the government to court for its decision to hunt a wolf family inside the wolf zone. Last summer the court delivered its judgment and concluded that the decision was in breach of the Nature Diversity Act, ruling that the government did not manage to show sufficient grounds to make an exception from the strict protection of the wolf. The judgment has been appealed by the government and the appeal hearing is scheduled for summer 2022.

Martinsen said the government was hostile towards wolves – the leading Labour party last year formed a coalition with the Centre party, which has a policy to remove all wolves from the country.

“They don’t want wolves in Norway, they have always been clear that wolves should not be breeding in nature,” Martinsen said.

Other European countries have introduced anti-wolf policies. Hunters in Sweden have already shot dead most of their annual target of 27 wolves. In Germany, where wolves have appeared in recent years having crossed from other European countries, there has been a debate over the predator’s impact on agriculture, and in the UK there are fierce arguments over whether they should ever be reintroduced.