Last summer, oil and gas-industry groups were lobbying to overturn federal rules on leaks of natural gas, a major contributor to climate change. Their message: The companies had emissions under control.

In private, the lobbyists were saying something very different.

At a discussion convened last year by the Independent Petroleum Association of America, a group that represents energy companies, participants worried that producers were intentionally flaring, or burning off, far too much natural gas, threatening the industry’s image, according to a recording of the meeting reviewed by The New York Times.

“We’re just flaring a tremendous amount of gas,” said Ron Ness, president of the North Dakota Petroleum Council, at the June 2019 gathering, held in Colorado Springs. “This pesky natural gas,” he said. “The value of it is very minimal,” particularly to companies drilling mainly for oil.

A well can produce both oil and natural gas, but oil commands far higher prices. Flaring it is an inexpensive way of getting rid of the gas.

Yet the practice of burning it off, producing dramatic flares and attracting criticism, represented a “huge, huge threat” to the industry’s efforts to portray natural gas as a cleaner and more climate-friendly energy source, he said, and that was damaging the industry’s image, particularly among younger generations.

“What’s our message going forward?” Mr. Ness said. “What’s going to stick with those young people and make them support oil and gas?”

The recording runs 1 hour 22 minutes, opening with a moderator’s remarks and concluding with a panel discussion that covered a wide range of issues including job creation, the threats posed by solar and wind energy, and the federal leasing of oil and gas rights. The audio was provided by an organization dedicated to tracking climate policy that said the recording had been made by an industry official who attended the meeting.

Neither the organization nor the official was willing to be identified, out of concerns for industry retaliation, but three people heard in the recording, including the event’s moderator, Ryan Ullman of the Independent Petroleum Association, said that it reflected their comments. Jennifer Pett Marsteller, an association spokeswoman, confirmed the meeting’s date, location and speakers’ list, which matched the recording. She declined to comment on the speakers’ remarks, saying there was no official recording.

A spokeswoman for Mr. Ness, Kristen Hamman, declined to confirm his remarks, saying that the Independent Petroleum Association had not produced an official transcript of the meeting that would allow her to do a comparison. Mr. Ness has publicly spoken against the need to strengthen regulation of methane, a major component in natural gas, calling stronger rules “an unnecessary burden” and saying the industry already produced “valuable energy resources in a responsible manner.”

The remarks reflect the concerns of an industry that has presented itself as part of the solution to climate change, and natural gas as an important “bridge fuel” that can help the world shift away from coal, the dirtiest-burning energy source, toward renewable energy.

Natural gas, when burned (whether in a flare, or to fuel a household oven), typically emits just half the planet-warming greenhouse gases that coal does. But by flaring off natural gas, rather than capturing it for use, companies are creating pollution without creating usable energy.

Many companies do directly drill for and capture natural gas for use. But researchers have warned that drilling for the gas also causes sizable leaks of methane directly into the atmosphere, which is even more damaging for the climate than flaring the gas. Methane can also escape faulty flares, and companies sometimes also deliberately release the gas from wells and pipelines in a practice known as venting.

Methane can trap more than 80 times more heat in the earth’s atmosphere than carbon dioxide, over the shorter term. Research has shown that methane emissions from oil and gas production are far larger than previously estimated.

To address the issue, the Obama administration had proposed new regulations that would have required, among other measures, that oil and gas companies install technology to detect and fix methane leaks from their wells, pipelines and storage facilities. 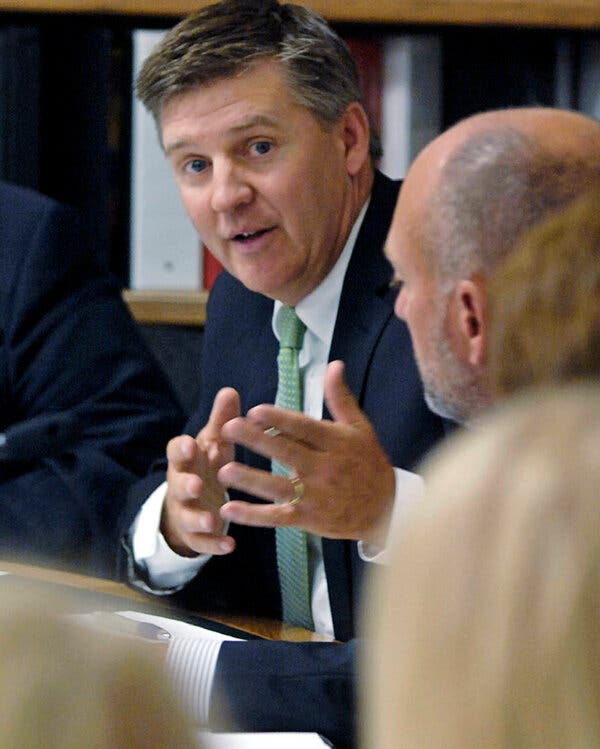 Ron Ness, president of the North Dakota Petroleum Council, said of natural gas: “The value of it is very minimal. But you’ve got to manage your gas to produce your oil.”Credit…Mike McCleary/The Bismarck Tribune, via Associated Press

But a coalition of oil and gas companies pushed the Trump administration to abandon those rules. It said the industry was already regulated by state laws and was already equipped to plug leaks on its own without federal rules. Lobbyists argued that the companies were already incentivized to rein in methane emissions, given that gas is a valuable resource.

“The oil and natural gas industry has a pure economic incentive to prevent every molecule of ‘pollutant’ from escaping to the atmosphere,” wrote James D. Elliott, a lawyer representing a coalition of oil and gas groups led by the Independent Petroleum Association, including the North Dakota Petroleum Council, in a letter to the Environmental Protection Agency on Nov. 25, 2019.

But speaking a few months earlier, at the June 2019 meeting, Mr. Ness appeared to contradict that argument. There is such a glut of natural gas, he said, that some producers that drill primarily for oil have little use for the gas that comes up with it. Yet “you’ve got to manage your gas to produce your oil.”

The pushback against more stringent methane rules has been led by smaller, independent producers who argued the rules were unfairly burdensome for smaller drillers, because they could not afford to invest in costly leak-detection and capture technology.

Oil giants like BP, on the other hand, urged the federal government to keep methane regulations in place, saying it was “the right thing to do.” 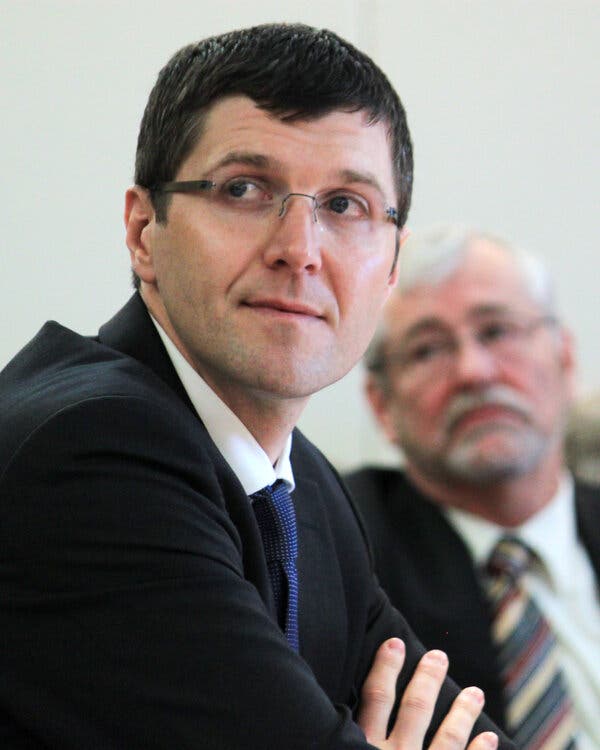 Ryan Flynn of the New Mexico Oil and Gas Association said that a chief concern among young, female and Latino voters, when it comes to the industry, “is always going to be environmental stewardship.”Credit…Susan Montoya Bryan/Associated Press

But ceding to the smaller operators’ demands, the Trump administration has proposed to eliminate federal methane rules in a move that would also reopen the question of whether the E.P.A. has the legal authority to regulate methane as a pollutant. The weakening of the methane standard is the latest in a long list of environmental-policy rollbacks under President Trump, who has vowed to loosen regulations on industry.

At the Colorado meeting, executives also worried about a potential backlash against the industry, particularly among younger voters. Recent surveys have shown a sharp rise in the number of Americans who feel passionately about climate change, and the issue appears likely to play a more prominent role in this year’s presidential election than in previous ones.

“Young voters, female voters, Hispanic voters, really every sector except for older conservative male voters,” Ryan Flynn of the New Mexico Oil and Gas Association said in the recording of the meeting, “their No. 1 issue when it comes to our industry is always going to be environmental stewardship, and concerns about what we’re doing with the environment.”

Dan Haley, president of the Colorado Oil and Gas Association, laid out the stakes.

“Hippies were going to change the world, until they wanted to get a job and buy a BMW,” Mr. Haley said in the meeting. “In Colorado, we’ve been kind of playing a game of whack-a-mole. We went from where fracking was the dirty word, and contaminated your water. And we inundated them with information about that and blitzed the TV airwaves,” he said. “Then slowly that changed into a health and safety messaging. And so we’re ramping up our health and safety messaging.”

Climate change was “the prism through which everything is being viewed,” Mr. Haley added. “We have to be comfortable talking about it, talking about how we are part of the solution through natural gas. And again, hitting people with emotions hitting them where they’re where their heart is.” 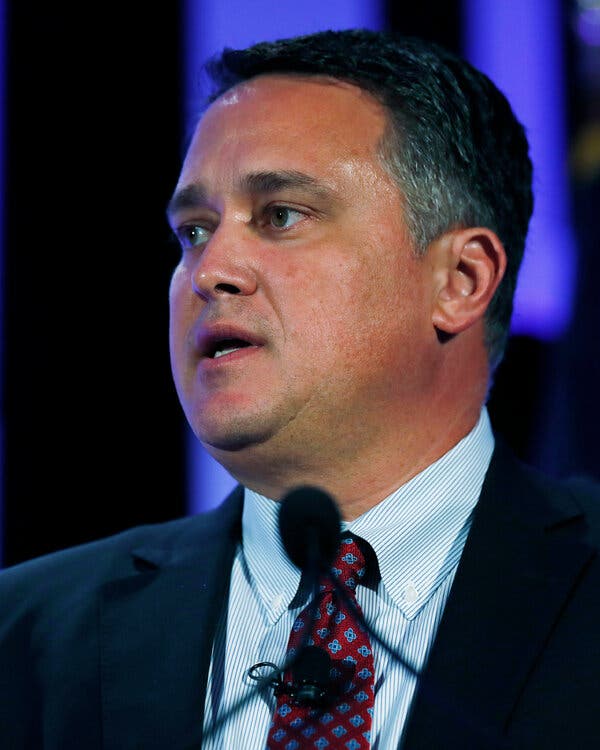 “Hippies were going to change the world, until they wanted to get a job and buy a BMW,” said Dan Haley, president of the Colorado Oil and Gas Association.Credit…David Zalubowski/Associated Press

“The activists are doing this when they talk about banning fracking in Colorado. They don’t show explosions. They don’t show rigs. They show women and children,” he said. “We have got to begin playing at that same emotional level or we will not win these battles.”

Scott Prestidge, a spokesman for Mr. Haley, said it was difficult to confirm the accuracy of a transcript from 2019, but said it was pretty clear that the remarks about the hippies were “said tongue-in-cheek.”

He added: “In Colorado, the men and women of this industry live and work within the communities where oil and natural gas are being developed. They care about clean air, clean water, and in protecting their family’s safety and their community.”

In an interview, Mr. Flynn said that he had merely been expressing what he described as widely held concerns about oil and gas’s effects on the environment that he thought the industry needed to better address.

And he said attitudes toward regulations were changing, even among smaller oil and gas producers. For instance, during the Obama administration his organization opposed stronger federal methane regulations. However, it did not back the more recent efforts to repeal those rules.

“We absolutely need to address young people’s, all people’s, concerns about climate change,” Mr. Flynn said. “We’ve taken criticism at times from our peers that we are engaging on these issues,” he said. “But it’s critical for the future of our industry.”