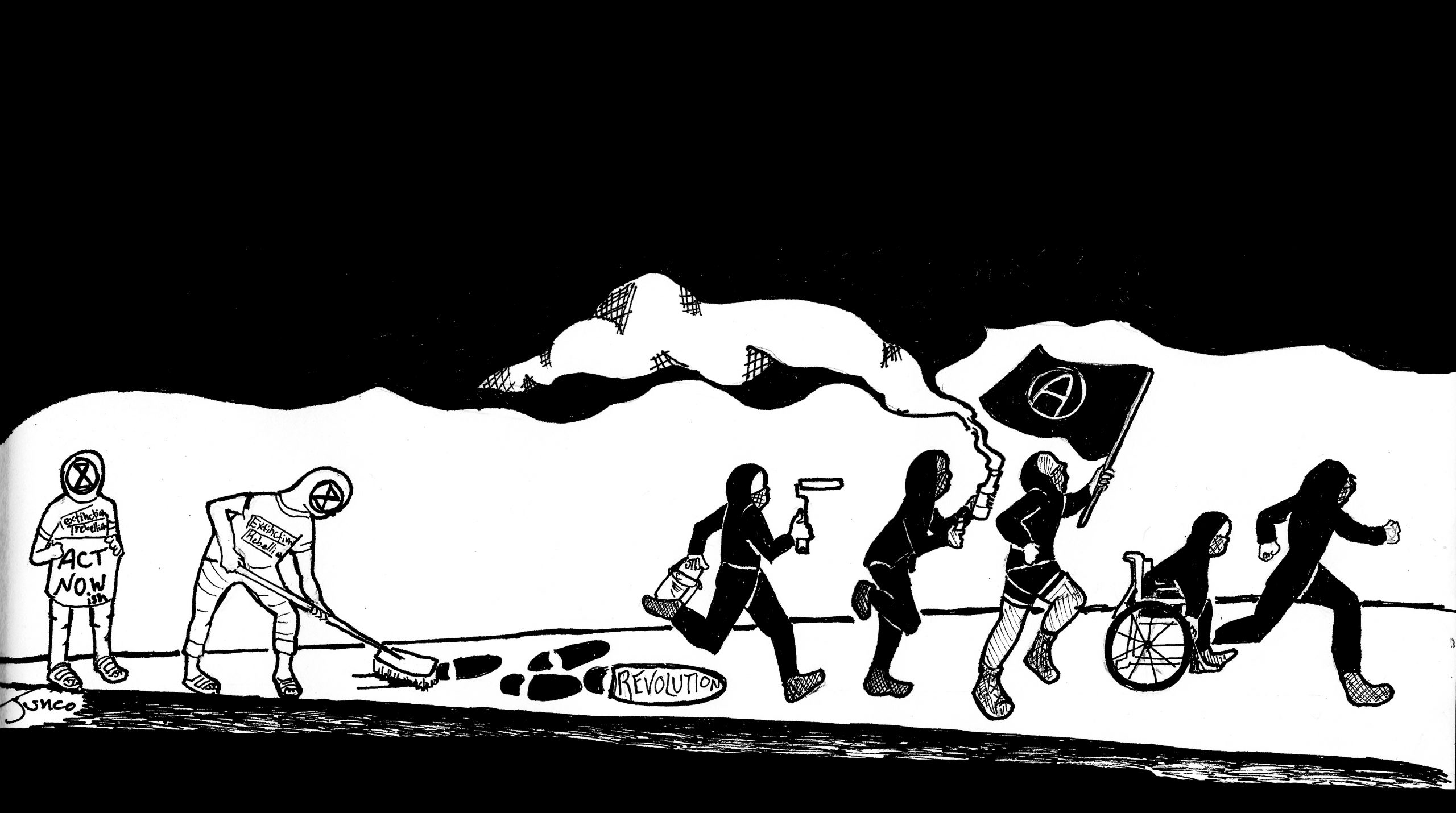 As some of you may have noticed, the world is ending. Climate catastrophe is happening. Those of us who are not ignoring this fact are filled with rage. We acknowledge that it is the will of corporations and the state that we ignore the crumbling earth at all costs. This is why Extinction Rebellion (XR) is so incredibly offensive. They claim radical changes must be made to protect the earth from further harm, while working with the very corporations and governments that cause that harm. XR also attempts to work with the police, while also utilizing intentional arrest as their primary tactic for demonstrations. This “from the inside out” strategy has never worked, and has only ever served to alienate the same marginalized people it claims to aid.

Extinction Rebellion first appeared in the UK during October of 2018 when a thousand people occupied the street in front of the House of Parliament. Since then, they have done several protests which used the strategy of mass arrest, primarily in the UK and US. This has resulted in arrest-fest after arrest-fest, with hundreds of people incarcerated and little gained. This tactic is justified merely by pointing to the high arrest count of demonstrations in past movements, and thus concluding that this factor alone was the key to their victories. This brings XR to many faulty conclusions, such as believing that this will have the same results in our current sociopolitical climate along with their willingness to work with the cops.

XR has stated on their website that they are making the strategic decision in some countries to liaise with the police, believing this will support their goals. They go on to state in seemingly obvious contradiction:

“XR puts love at the heart of change. In this way some people in Extinction Rebellion may choose to express gratitude and love towards police officers. We understand for those that have been victimized by the police that this can be difficult and alienating to witness. We especially ask white people to learn about white privilege.”

At this point any claims made to put minorities first seem void. Nothing but privilege could convince people it’s a good idea to warn the police about future criminal intentions as XR has—and continues to do—on their web page. One can find the time, date, and location of specific UK meetings and events months in advance with just a few clicks. In fact, XR’s lax security caused a massive police raid of an organizing space back in October, resulting in 10 arrests and endangering many people’s futures and livelihoods. Historically, this kind of organizing has lead to an increased police presence at demonstrations. If the movement’s goal is widespread change and increased awareness through disruption, as they claim, this fact will begin to catch up to them, and any small successes they are accomplishing now will likely be curbed.

Arrest as a tactic is an excellent way to build a record and help the state map your community (let alone the obvious ignorant racism of putting marginalized folks through the prison-industrial complex). Thus, XR has become a community built largely of white middle class people. As journalist Nafeez Ahmed of Insurge Intelligence stated, “the strategy of destabilizing the capacity of the security forces only works if it is designed to galvanize a community oppressed by those security forces.” No movement can succeed with a group of people who have never been impacted by the oppression they fight against. They claim these tactics have largely been influenced by a few famous nonviolent movements, and so though they were likely doomed to fail from the start.

XR points to the Civil Rights movement as proof of the legitimacy and effectiveness of their tactics. This ignores the historical context surrounding that movement. The Civil Rights movement happened during the Cold War, during which the US produced propaganda proclaiming themselves the land of freedom and democracy. The strategy of mass arrests made public the contradiction between this image and reality. Additionally, the Civil Rights movement ran concurrent to, and was preceded by, movements that included direct action and physical violence in their repertoire. Even with these advantages, the Civil Rights movement did not end racism—what once was set in law was transformed into other forms of institutionalized white supremacy. This struggle, like many others, is stripped of all nuance to fit XR’s narrative, and is misapplied to today with no analysis of how the world has changed. In addition, it falls into a trap that ensnares most activists: the trap of making demands. To make demands is to imagine that the state can fix the problem and that it is not itself the problem. Everywhere we can see the state’s hand in moving climate change forward—from wars that scar the earth, to the burning of forests, to the maintenance of cities. Wherever we find ecological destruction, we find the state. The state is not a neutral party or a mediator between activists and their rival, the corporations. There could be no adequate solution to climate change so long as the state remains. There is only one demand we can make of the state: its complete and utter ruin.

XR’s actions make little sense if thought of as an attempt to effect change; however, if understood as an attempt to make money, they begin to make sense. While XR claims not to be a corporation, they do admit that they started from a corporation called Rising Up!, which was founded in 2016. While this corporation was only founded two years before XR, their parent company, Compassionate Revolution, was born from the Occupy Wall Street movement. This company, according to XR’s website, “processes donations and spends them to support [Extinction Rebellion].” This entire “movement” is nothing more than a few paid activists hiding behind a name to make money. And this revelation explains other strange aspects of XR, such as their “beyond politics” approach. While it does not make sense to align with conservatives if you’re trying to stop climate change, it works great if your goal is to make money. This money-focused approach can have disastrous consequences, including leaving the door wide open for fascism.

Ronan Harrington, XR’s general election strategist, advocated that “the movement should learn from the tactics of Nigel Farage,” a man known for his fondness for fascistic beliefs. He suggests the XR community “learn from Farage to honor and defend this way of life” (whatever that means). Unsurprisingly, it seems that XR’s political strategy group decided to do just that. During a meeting, they agreed to attempt to meet with Farage, along with agreeing to “approach [the] Brexit Party.” This can be seen as a clear attempt by XR to align themselves with major fascist players. One thing is for sure, XR is certainly not “telling the truth” about their mission.

Since forming in 2018, XR has done nothing to accomplish its so-called goals, nor have their demands been met in any serious capacity. This isn’t surprising, because there is, and never will be, a government for the people. XR has proven once again that the only demands worth making are for the complete dismantling of the pipelines and governments controlling them, the death of every politician, and the closing of every prison.