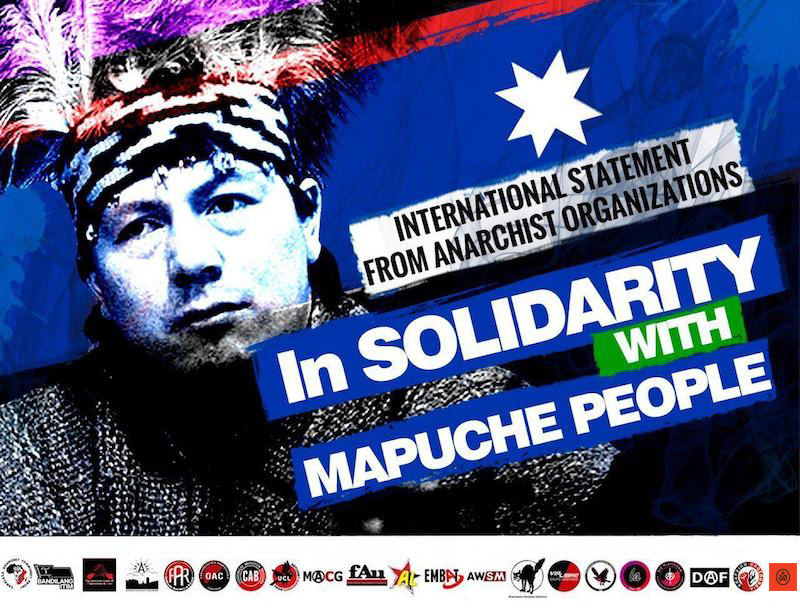 SOLIDARITY WITH THE STRUGGLE OF THE MAPUCHE PEOPLE

We stand in solidarity with the struggle of the Mapuche people who are currently experiencing another episode of persecution and repression by the racist and colonial State of Chile. The State of Chile is aided by far-right groups and militias.

For more than 90 days, nearly 30 Mapuche political prisoners have been on a hunger strike demanding immediate freedom or at least a change to precautionary measures for COVID-19. The review of judicial processes is still underway. Their demands: the end of the criminalisation of the Mapuche people, the repeal of the Anti-Terrorism Law (which was inherited from the dictator Augusto Pinochet), and the application of ILO Convention 169 (art. 7, 8, 9 and 10) whose omission from the State’s law resulted in the serious health condition of Machi Celestino Córdova. Córdova’s condition is a result of several hunger strikes protesting the repression of Mapuche spirituality by the State and its colonial institutions.

In addition, we demand a response from the State of Chile for the deaths of Camilo Catrillanca (murdered by state agents), Macarena Valdés (murdered by hitmen from extractive companies), Alejandro Treuqui (murdered in strange circumstances), and Brandon Huentecol (whose body still houses the pellets that special forces policemen fired at him). We also demand a response for the centuries of systematic violence and deaths of Mapuche people. This systemic violence is a constant practice by all previous administrations of the State of Chile.

As a form of pressure on the Piñera government, different Mapuche communities began occupying a series of municipal buildings in the Araucanía region (Victoria, Collipulli, Galvarino, Angol, Curacautín and Traiguén). Recently on Saturday August 1st, fascists and groups of thugs hired by the employers violently attacked a Mapuche community, seriously injuring several men, women and children. They did this armed with the complicity of the State. Immediately afterwards, police arrested 46 members of the community who are awaiting trial by the racist Chilean justice system.

We denounce the actions of the new Interior minister of Chile, Víctor Pérez as an inciter and “ideologist” of this violent act. Pérez was an active participant in the Pinochet dictatorship and a defender of a Nazi, Paul Schafer. On a visit a few days ago to Mapuche territories, Pérez threatened the people there by giving the green light to far-right groups such as APRA and “Peace in Araucanía” to carry out these cowardly attacks with complete impunity.

As anarchists we repudiate all acts of racism, fascism, and colonialism. We raise the demands for autonomy and territorial self-determination of all oppressed people in struggle. We call for active solidarity with the communities of the Mapuche people in resistance, who for more than 500 years have been in conflict with the capitalist and colonial economic interests that have destroyed and dispossessed their ancestral territories. It is time to end the militarisation, repression, and imprisonment of communities in resistance around the world.

RACISM AND FASCISM HAVE TO BE BURIED TOGETHER WITH CAPITALISM AND PATRIARCHY!
ALL OUR SUPPORT AND SOLIDARITY TO THE MAPUCHE PEOPLE WHO FIGHT AGAINST STATE AND POLICE VIOLENCE!