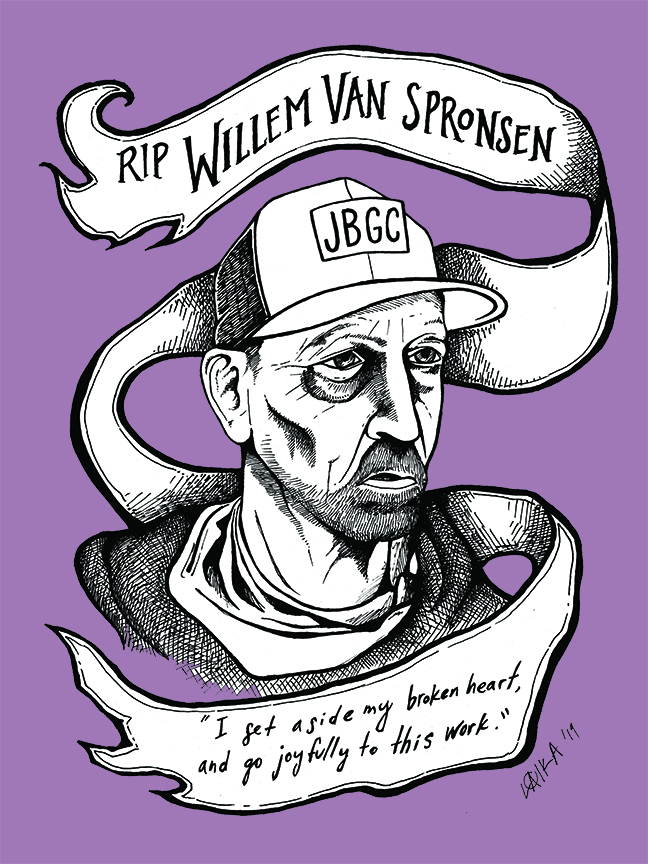 It feels impossible that only one year has passed since Willem Van Spronsen’s action at the Tacoma ICE detention center, and at the same time we can’t believe it’s already July again. As we began working on our Fall issue last August, Willem’s final words and actions were fresh on our minds. It felt as if the powderkeg we call America was primed and positioned for ignition and we were tracking the sparks flying from around the world, just waiting for one to catch. There are so many frontlines to fight on now, but don’t forget about the thousands in ICE concentration camps under inhumane conditions. Don’t forget about the execution of Willem Van Spronsen by Tacoma Police, and his final plea for the direct abolition of ICE and their facilities. In his own words:

“Detention camps are an abomination.I’m not standing by.I really shouldn’t have to say any more than this.”

We know that many of you haven’t had a chance to check out the Earth First! Journal Mabon/Fall ’19 issue, where we included this memorial drawing by a collective member on the inside cover and Willem’s statement on page 24. We have included both the memorial piece and his statement in digital form here, along with the intro to his statement which was included in the Journal.

On July 13, 2019, Willem Van Spronsen attempted to set fire to a fleet of buses at Tacoma, Washington’s Northwest Detention Center (NWDC). The NWDC is a for-profit detention center owned by The Geo Group, used to imprison migrants awaiting deportation and legal hearings. Armed with an AR-15 assault rifle and flares, Spronsen was shot and killed by Tacoma Police, having burned one car.

While the Earth First! Journal is a publication centered primarily around ecological resistance, it is impossible to ignore the importance and relevance of the State’s war on migrants to the eco-defense movement. The same systems and rhetoric that allow unthinkable horrors to be visited upon our landscapes allow asylum-seekers to be imprisoned in these cages, to the profit of The Geo Group and other private contractors.

Beyond the direct ecological impact of the proposed border wall (see “Butterflies and Borders”, page 24), the ecological genocide of the so-called “Third World” by industrial nations is long-standing, efficient, and rampant. The brutal resource extraction of Central and South America (diamonds, beef, bananas, oil, the list goes on) drives Indigenous peoples to flee their ancestral homes, only to wind up imprisoned by the very nations profiting from the destruction of their lands. The resistance of the border war and its concentration camps is inseparable from defense of the Earth.

It is with this in mind that I submit Will Spronsen’s final statement, sent to his friends shortly before what he surely knew would be his last action.

There’s wrong and there’s right.
It’s time to take action against the forces of evil.

I have a father’s broken heart
I have a broken down body
And I have an unshakable abhorrence for injustice
That is what brings me here.
This is my clear opportunity to try to make a difference, I’d be an ingrate to be waiting for a more obvious invitation.

I follow three teachers:
Don Pritts, my spiritual guide. “Love without action is just a word.”
John Brown, my moral guide. “What is needed is action!”
Emma Goldman, my political guide. “If I can’t dance, I don’t want to be in your revolution.”

I’m a head in the clouds dreamer, I believe in love and redemption.
I believe we’re going to win.
I’m joyfully revolutionary. (We all should have been reading Emma Goldman in school instead of the jingo drivel we were fed, but I digress.) (We should all be looking at the photos of the YPG heroes should we falter and think our dreams are impossible, but I double digress. Fight me.)

In these days of fascist hooligans preying on vulnerable people in our streets, in the name of the state or supported and defended by the state,

In these days of highly profitable detention/concentration camps and a battle over the semantics,

In these days of hopelessness, empty pursuit and empty yearning,

We are living in visible fascism ascendant. (I say visible, because those paying attention watched it survive and thrive under the protection of the state for decades. [See Howard Zinn, A People’s History of the United States.] Now it unabashedly follows its agenda with open and full cooperation from the government. From governments around the world.

Fascism serves the needs of the state serves the needs of business and at your expense. Who benefits? Jeff Bezos, Warren Buffet, Elon Musk, Tim Cook, Bill Gates, Betsy de Vos, George Soros, Donald Trump, and need I go on? Let me say it again: rich guys (who think you’re not really all that good), really dig government (every government everywhere, including “communist” governments), because they make the rules that make rich guys richer.
Simple.
Don’t overthink it.

(Are you patriots in the back paying attention?)

When I was a boy, in post-war Holland, later France, my head was filled with stories of the rise of fascism in the ’30s. I promised myself that I would not be one of those who stands by as neighbors are torn from their homes and imprisoned for somehow being perceived as lesser.
You don’t have to burn the motherfucker down, but are you going to just stand by?

This is the test of our fundamental belief in real freedom and our responsibility to each other.
This is a call to patriots, too, to stand against this travesty against everything that you hold sacred. I know you. I know that in your hearts, you see the dishonor in these camps. It’s time for you, too, to stand up to the money pulling the strings of every goddamn puppet pretending to represent us.

I’m a man who loves you all and this spinning ball so much that I’m going to fulfill my childhood promise to myself to be noble.

Here it is, in these corporate for profit concentration camps.
Here it is, in Brown and non-conforming folks afraid to show their faces for fear of the police/migra/Proud Boys/the boss/beckies…
Here it is, a planet almost used up by the market’s greed.

I’m a black and white thinker.
Detention camps are an abomination.
I’m not standing by.
I really shouldn’t have to say any more than this.

I set aside my broken heart and I heal the only way I know how—by being useful.
I efficiently compartmentalize my pain…
And I joyfully go about this work.
(To those burdened with the wreckage from my actions, I hope that you will make the best use of that burden.)

To my comrades:
I regret that I will miss the rest of the revolution.
Thank you for the honor of having me in your midst.

Giving me space to be useful, to feel that I was fulfilling my ideals, has been the spiritual pinnacle of my life.

Doing what I can to help defend my precious and wondrous people is an experience too rich to describe.

My trans comrades have transformed me, solidifying my conviction that we will be guided to a dreamed-of future by those most marginalized among us today. I have dreamed it so clearly that I have no regret for not seeing how it turns out. Thank you for bringing me so far along.

I am antifa. I stand with comrades around the world who act from the love of life in every permutation. Comrades who understand that freedom means real freedom for all and a life worth living.

Keep the faith!
All power to the people!
Bella ciao.

Don’t let your silly government agencies spend money “investigating” this one. I was radicalized in civics class at 13 when we were taught about the electoral college. It was at that point that I decided that the status quo might be a house of cards. Further reading confirmed in the positive. I highly recommend reading!

The semi-automatic weapon I used was a cheap, home-built unregistered “ghost” AR-15, it had six magazines. I strongly encourage comrades and incoming comrades to arm themselves. We are now responsible for defending people from the predatory state. Ignore the law in arming yourself if you have the luxury, I did.