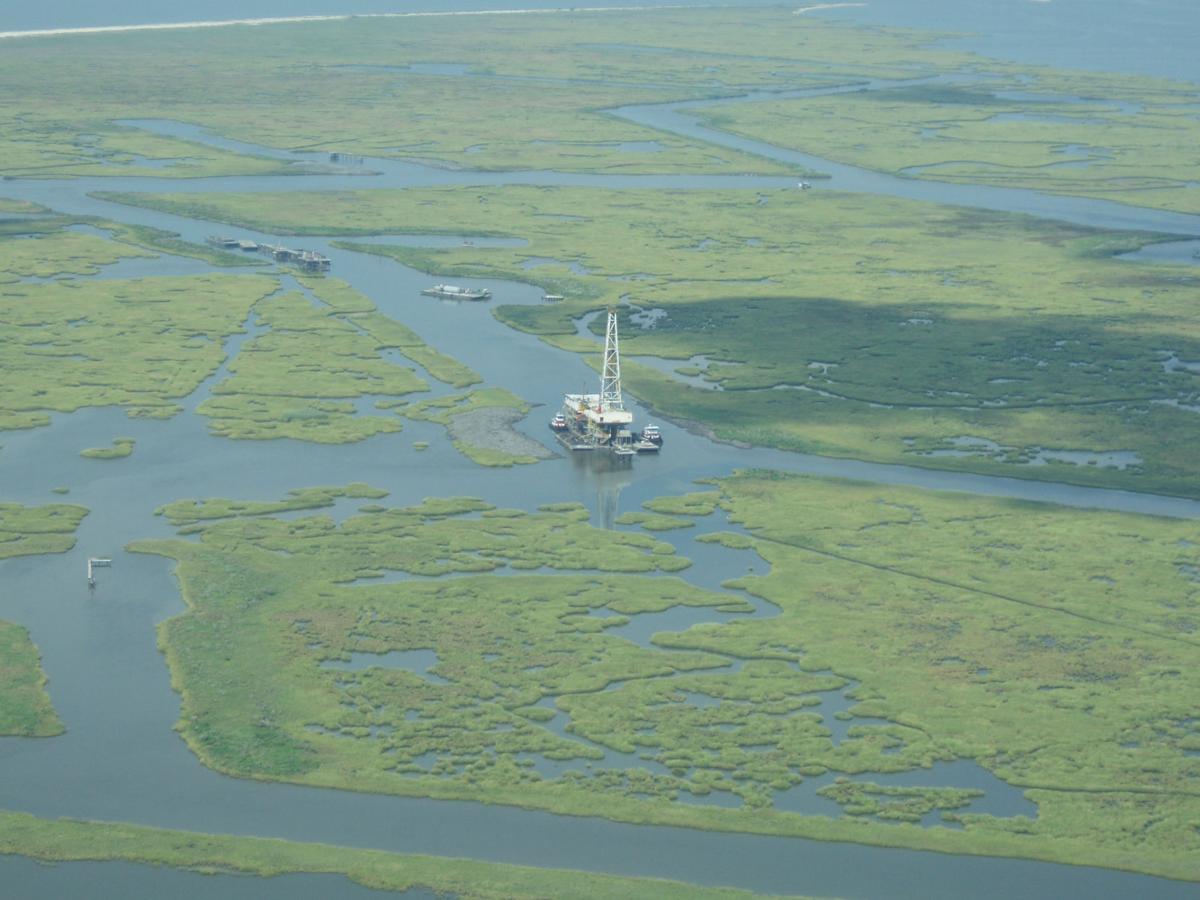 An aerial view of the Missippi Delta wetlands that may disappear because of sea level rise fueled by global warming. By Torbjörn Törnqvist

Because of increasing rates of sea level rise fueled by global warming, the remaining 5,800 square miles of Louisiana’s coastal wetlands in the Mississippi River delta will disappear. The only question is how quickly it will happen, says a new peer-reviewed study published Friday in Science Advances.

“This is a major threat not only to one of the ecologically richest environments of the United States but also for the 1.2 million inhabitants and associated economic assets that are surrounded by Mississippi Delta marshland,” the report concludes.

The new study reviewed the rates of sea-level rise that caused wetlands to disappear along Louisiana’s coast during the 8,500-year history of the current Mississippi River delta. It found that at rates of relative sea level rise — the combination of rising water and ground  subsidence — of between 6 and 9 millimeters a year , ancient coastal marshes would turn into open water within 50 years. At rates of 3 millimeters a year, it would take a few centuries.

The globally averaged rate of sea-level rise between 2006 and 2015 was about 3.58 millimeters a year, and that doesn’t include local subsidence rates along Louisiana’s coast. As a result, the state’s wetlands already have exceeded a tipping point, the study’s authors say.

A new study warns that sea level rise will swallow 5,800 square miles of wetlands in Louisiana. This map is the state’s 2017 estimate of wetlands loss through 2067. The study says even more wetlands will disappear in either 50 years or over several centuries, depending on increases in the rate of global warming. By Dan Swensen

“What it says is we’re screwed,” said lead author Torbjörn Törnqvist, a Tulane University geology professor, in an interview. “The tipping point has already happened. We have exceeded the threshold from which there is basically no real way back anymore, and there probably won’t be a way back for a couple of thousand years.”

Recent studies that show that growth of wetland plant material is keeping pace with today’s rate of subsidence and sea level rise have been based on just six to 10 years of measurements. That brief period of time is not long enough to determine that wetlands can literally outgrow sea rise.

By studying the boring core record of dozens of decades and hundreds of years of ancient marsh growth and disappearance, the researchers found that marsh growth could not keep up with the rising water levels. However, the report said additional research is needed to understand how rapid sea-level rise over decades causes the wetlands to disappear.

The study does not include a map showing what the new boundary of open water will be. But Törnqvist said he expects the eventual shoreline will parallel what’s known as the Baton Rouge Fault, an east-west line where land heights today are at about 15 feet above sea level. For the New Orleans area, that would be along the North Shore, somewhere near Interstate 12.

Törnqvist said the biggest question now is how long the state’s wetlands will last, and what can be done to slow their disappearance.

“I don’t think this is going to happen in my lifetime,” he said, pointing out that he just turned 58. “But my daughter turns 10 next week, and a lot of these things are going to happen in her lifetime. I’m not saying that when she is old, we’ll have no wetlands at all, but we will have massive changes.”

That said, the paper is not making a case for giving up.

“It’s important to highlight the fact that it still depends on our actions,” Törnqvist said. “If we take appropriate actions and we can keep that rate of sea-level rise at least a little bit in check, it’s likely the wetlands are still going to drown eventually, but maybe over centuries.”

Those actions include reducing greenhouse-gas emissions worldwide to keep global temperatures closer to where they are now, which is about 1.5 degrees warmer than in the pre-industrial era, he said. And executing the state’s coastal Master Plan of hurricane protection and wetland restoration projects, including plans to build major sediment diversions to help keep wetlands above water.

Bren Haase, executive director of the state’s Coastal Protection and Restoration Authority, said the new study’s findings are not surprising. The 2017 update of the coastal Master Plan estimated sea level rise alone through 2067 would range from a low of 8.6 mm per year to a high of 16.6 mm — higher than the assumptions the paper uses.

And the CPRA’s maps of what happens if restoration projects are not completed show a dramatic retreat, including the disappearance of most of the land bridge that connects eastern New Orleans to Slidell and all of the swamp around Lake Maurepas, as well as most wetlands outside of leveed areas east and west of the river south of New Orleans.

Haase said state land-loss modeling concluded that 75% of the marsh loss was attributed to rising water levels. He  said that in planning individual projects, the Master Plan used the state’s highest estimate of sea rise, 16.6 mm per year, plus local subsidence rates, which is greater than the estimates used in the paper.

He said that where the plan calls for adding sediment through dredging, or by using diversions, areas along the river and barrier islands continue to be salvageable through the plan’s 50-year lifetime.

The state already has begun work on the 2023 Master Plan update, and the new study will be considered in that effort, Haase said.

And he pointed out that Gov. John Bel Edwards earlier this year announced that CPRA would embark on a program to bring the state’s oil and gas and petrochemical industry players together to find ways of reducing or permanently storing the state’s carbon emissions, specifically because of the role those emissions play in driving sea-level rise.

While that effort has been delayed by the COVID-19 pandemic, Haase said he expects meetings to begin later this year.

John Lopez, a biologist with the Lake Pontchartrain Basin Foundation and the Restore the Mississippi Delta Coalition, said the new study will help direct the future of the master plan.

“The conclusions we draw here are that our coastal wetlands are seriously threatened, that aggressive interventions to restore and maintain our coast — particularly through sediment diversions — are critical, and that we must do everything possible to limit sea level rise by reducing global emissions,” Lopez said. “But it’s a long way from a death knell for our coast.”

The wetland losses predicted by the study do raise questions about the ability of the New Orleans metropolitan area to survive, even with the post-Katrina improvements to its levee system. That system already has been rated as “high risk” by the Army Corps of Engineers because of the potential of overtopping by hurricane storm surges, which could result in hundreds of billions of dollars in damages.

“Is it feasible to have some kind of fortress out in the Gulf?” Törnqvist asked rhetorically. “I’m sure there’s going to be a big debate about whether we should aim for that. But it’s going to be incredibly vulnerable. If we have no wetlands left, the impacts of these storms are not going away, and sea-level rise is going to make those impacts bigger.

“It’s only a matter of time until large insurers and companies that consider investing in the city look at it, and say, ‘Wow, this is becoming too risky,'” he said.

John Day Jr., an emeritus oceanography professor at LSU who has studied Louisiana wetlands, says the new study bolsters his argument that the master plan does not go far enough in addressing existential issues like the future of New Orleans.

Day is a contributor to the Marais Design Strategy, a 2018 proposal to literally rebuild New Orleans over the next 100 years into a sustainable island by raising large segments of the city to 15 feet or higher above sea level, which would require temporarily relocating all structures in those areas while the material was mined from Lake Pontchartrain or elsewhere and pumped within the levee system.

While such a plan, which would cost billions of dollars, seems unachievable, it mimics how the island city of Galveston, Texas, was elevated by 7 to 15 feet in the aftermath of a devastating 1900 hurricane.

Day also recommends dramatic changes in the state’s proposed Maurepas Swamp diversion, turning it into a project that would pump far more sediment-laden water from the Mississippi into the swamp to elevate the western end of the Pontchartrain Basin. Such a project would add protection to areas as far north as Baton Rouge from hurricanes and other flood events in the future, he said.

The Törnqvist study’s findings are based on a study of corings taken from 355 boreholes in locations west of New Orleans within the river’s historic delta. The borings were drilled to depths of as much as 39 feet below the surface to measure deposits of sediment and organic material over time the last 8,500 years. The corings indicated that rates of relative sea-level rise approached 10 mm a year  between 8,500 and 7,000 years ago and then slowly decreased to a rate of about 0.5 mm a year during the millenium before the industrial age.

Meanwhile, the dramatic increases in carbon dioxide and other greenhouse gases released into the atmosphere during the past 150 years have fueled rising temperatures that have increased ocean water heights by swelling individual water molecules. Sea-level rise has been compounded by the water added to the seas from the melting of glaciers and polar ice caps.

Editor’s note: This story was changed on May 28 to correct information about the rate of sea level rise used by Louisiana in designing coastal Master Plan projects. The state used a rate of 16.6 mm a year, plus local subsidence, greater than the rates estimated by the study.