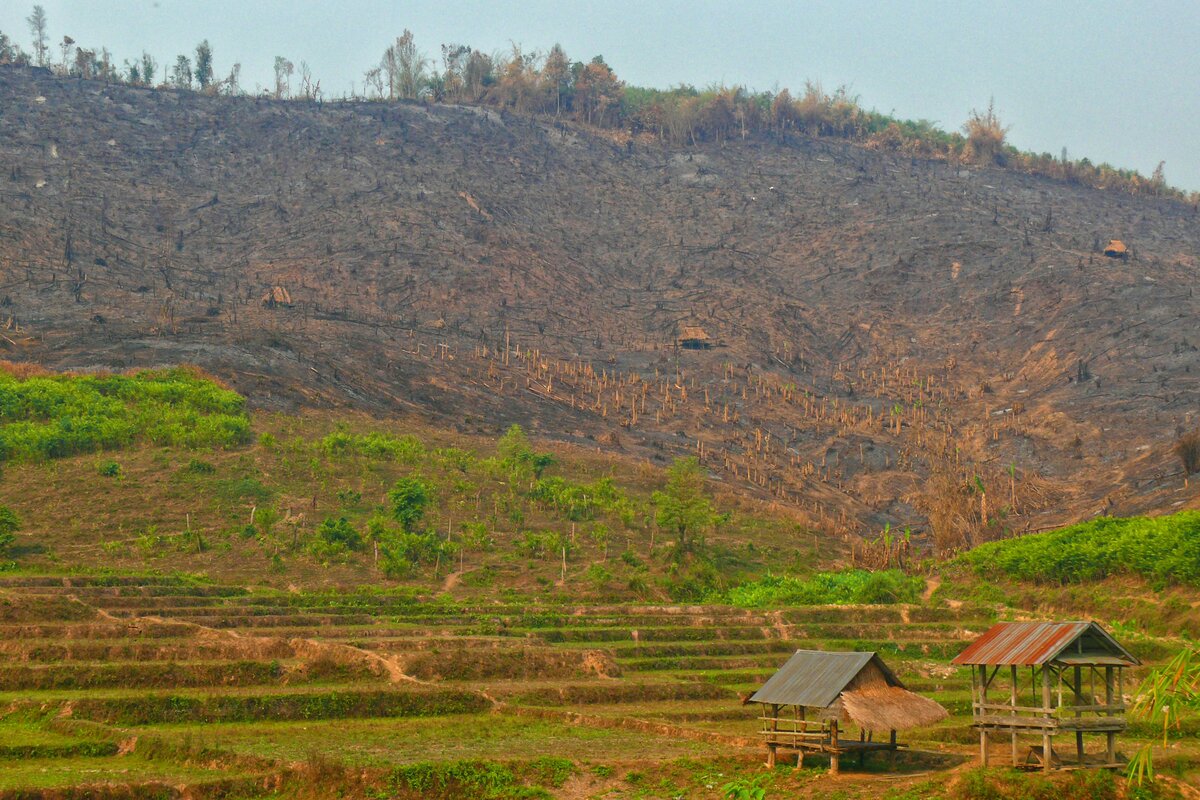 The landscape after burning. Photo by Robert Bociaga.

The Naga tribes inhabit the hills in the northwestern corner of Myanmar and northeast India. They had long been isolated from outside culture, dwelling in independent village republics. This protected them from the land grabs that have been so prevalent in the rest of Myanmar.

For centuries, tribes could sustain themselves by following their own customary tenure system, deciding who can use and manage different resources. Their traditional rules have guided them in the effective management of the properties that belong to separate or multiple households, clans, villages and whole tribes.

However, their rights and culture have been recently undermined by amendments to the Myanmar’s Law on Vacant, Fallow and Virgin (VFV) Land. The essence of the dispute lies in the issue of shifting arable lands, called jhum or dengyo.

The law categorizes these lands as VFV and thus makes them particularly susceptible to expropriation. Another law, on farmlands, does not recognize this form of cultivation, leaving forest-based Naga tribes at peril of losing all claims to the lands and forests that they manage rotationally. 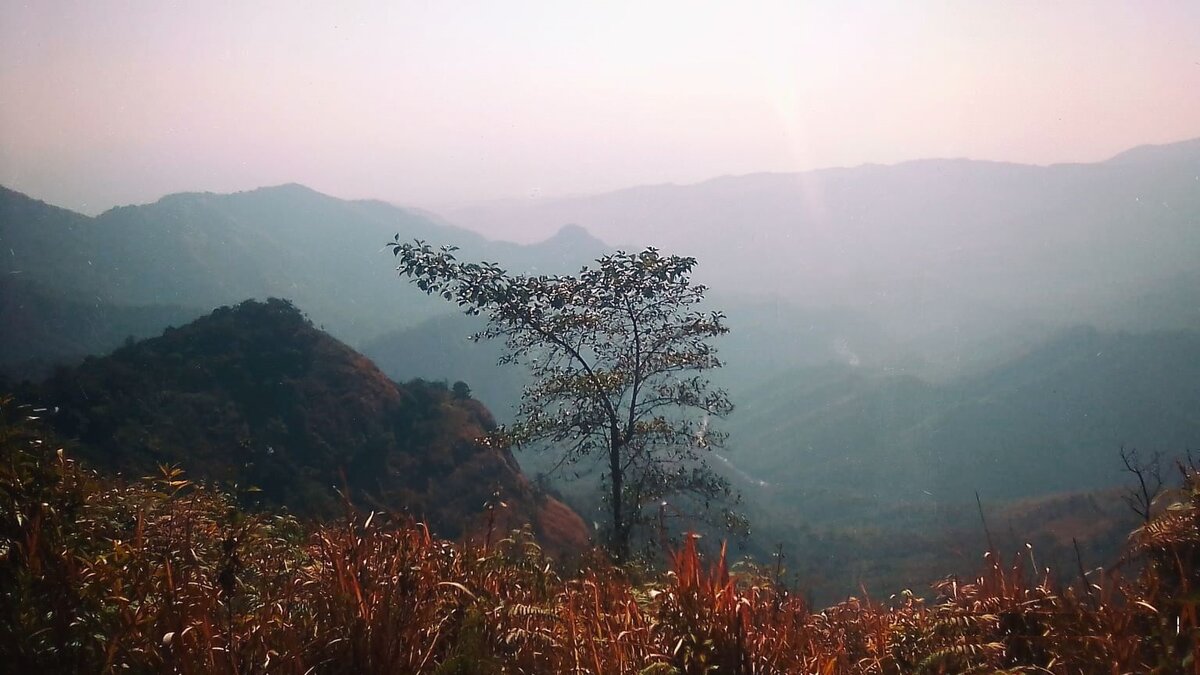 View on the Saramati Peak on the Myanmar-Indian Border which is of spiritual importance to Makuri subtribe. Photo by Robert Bociaga.

“We were not sure if we can retain access to the forest in the future,” says Yo Ela, a tribesman from Somra, on the Myanmar-India border. “We had been cultivating the forest since generations but suddenly the government claimed rights to it. We were forced to revise our rules and cut the timber down for their projects.”

The forests in Somra used to be a combination of hardwood and pine trees, with rice, vegetables, fruits and herbs sown on the hillsides. The arrival of the forest department, with its land management system, undermines the sustainable forest management that the tribes practice in accordance with their customary system, they say.

“There is no deer or hornbill anymore in the forest,” Yo Ela says, adding that the uncertainty over whether the government will make tribal forest management illegal has left his community in despair.

Expropriation of community-managed forests governed under customary arrangements can lead to dire consequences, opening the door to the looting of resources by powerful newcomers. Myanmar’s previous long-lived military regime treated community properties as being at its own disposal. After the country’s transition to a semi-democracy in 2015, there was hope for change, both among the Bamar majority and ethnic minorities. Among the reforms, the persecution of minorities for their Christian beliefs in this Buddhist-majority country ended, as did their exploitation for army projects. 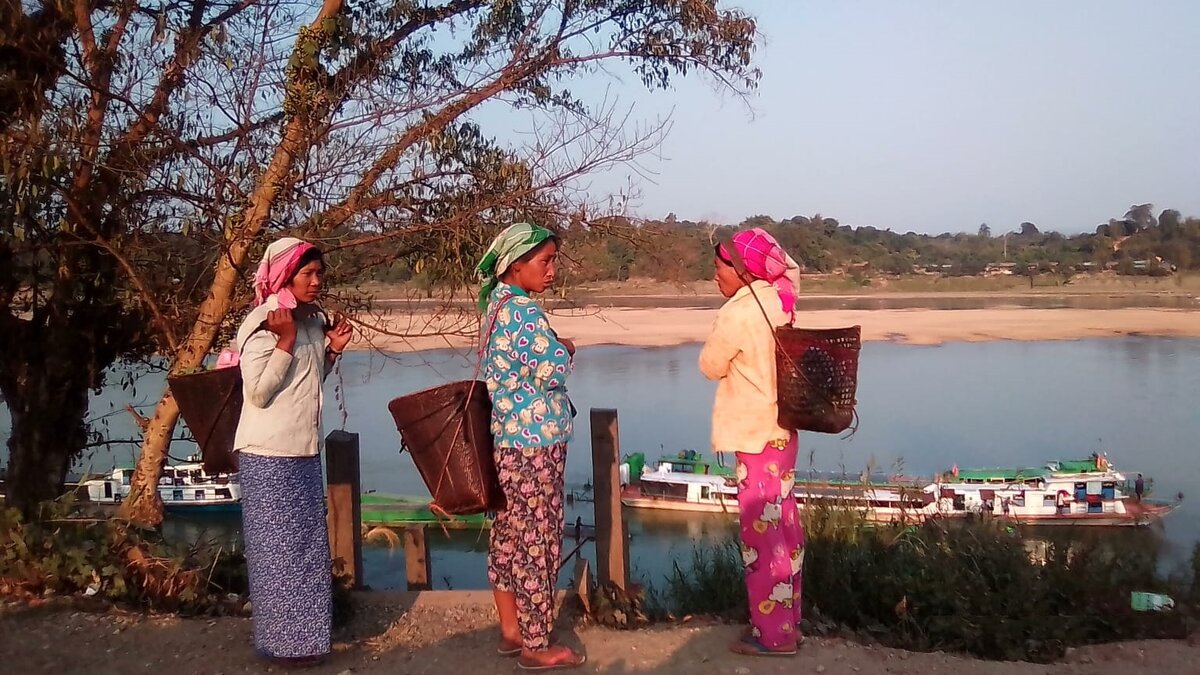 Naga people at Chindwin River in Khamti Town outside of the officially demarcated Naga Zone. Photo by Robert Bociaga.

“In the past, we couldn’t object to the army order; otherwise we would be killed on the spot,” says Din Pe, a member of the Dan Gon subtribe.

One of the hopes for peacebuilding in Myanmar was the creation of a federal state with decentralized powers to manage land and natural resources. Such a system would help distribute the benefits between the national, state and local government levels.

However, today, in pursuit of investment reforms, decision-makers based in the capital Naypyidaw have created a new set of rules for the management of land and forest hundreds of miles away, threatening to derail all the reconciliation efforts. At first, lawmakers renamed community land and resources as virgin, fallow and vacant land. They then set a requirement of obtaining official permission for the occupation of land. In addition, they removed provisions on security of tenure over traditional tenure arrangements.

Policy advisers from Food and Agriculture Organization of the United Nations (FAO) say most of the lands categorized as VFV are the customary property of the Naga tribes; hence, they warn, the VFV law may lead to unfair appropriation of tribal property. Civil rights groups say that lack of recognition of pre-existing rights or claims violates several international norms and conventions. Land in Our Hands (LIOH) and the Myanmar Alliance for Transparency and Accountability (MATA) have called for the withdrawal of the law.

The Myanmar government created a central committee to manage VFV land, known as the CCVFV. Official statistics show that about 30% of all the country’s land can be categorized as VFV land, which means it can be reallocated for private investment at any time.

Under the VFV law, the committee can reallocate this land to domestic and overseas investors for up to 70 years. The number of permits granted for VFV land is increasing every year, according to the Myanmar Investment Commission. 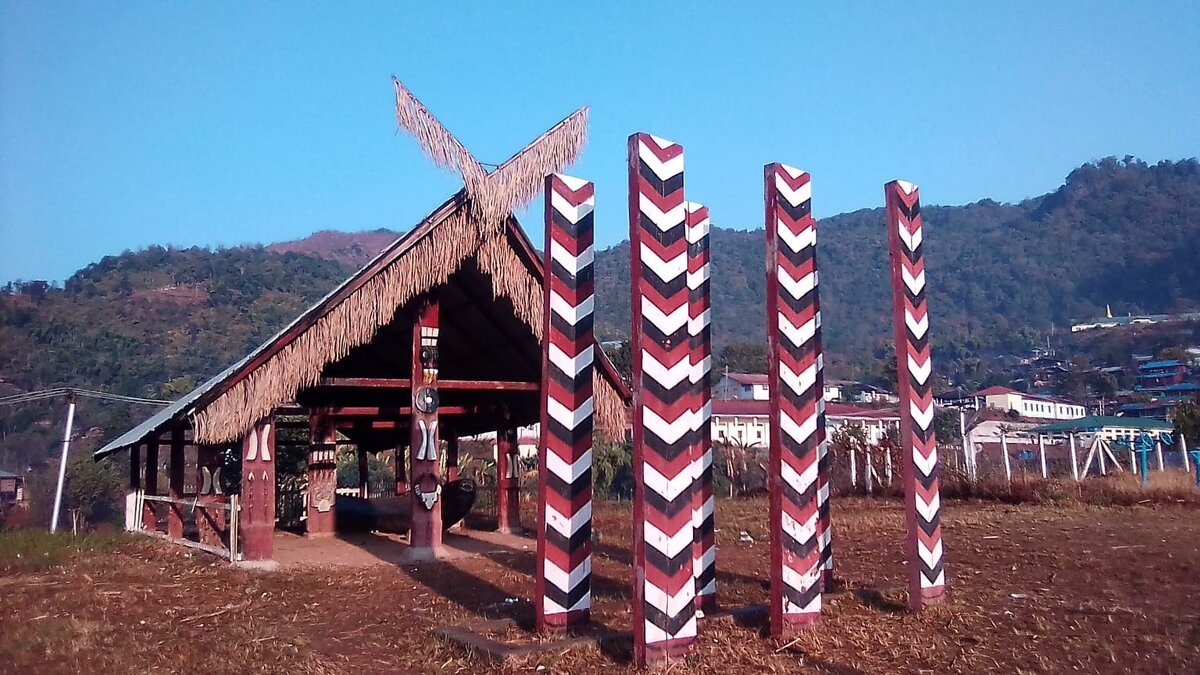 Replica of the Morung in Lahe town. It used to be the place of conveying the Naga culture to the young generations. Photo by Robert Bociaga.

The policies made in the country’s capital do not resonate with many tribal people.

“The new VFV law, imposed by the central government, was not even consulted with us,” says John Para, a tribal member from Leishi township. In reality, most Naga farmers are likely unaware of the obligations introduced by these provisions. Their territories are relatively remote from the rest of the country.

“All Naga lands and forests have owners,” John Para says. “No one can sell the land to the outsiders. We have clear rules for transferring land rights to protect against landlessness and accumulation.”

A long tradition of forest management has allowed the Naga people to maintain water sources and obtain supplies of food, medicine, construction materials and firewood. Because they live off the forests, they are invested in planting valuable trees with a combination of refined seeding, dispersing and tree felling. Working collectively, families sustain pine woodlots in a rotational system.

A 2018 report by the organization Resource Rights for the Indigenous People (RRtIP) notes that tribal households and villages grow subsistence and cash crops in a comprehensive system that encourages agriculture innovation. The effectiveness of the land management system is derived from the rules determining the decision-making process and rule enforcement. The report concludes that this sustainability cannot exist without customary tenure, village institutions and the tribal justice system. 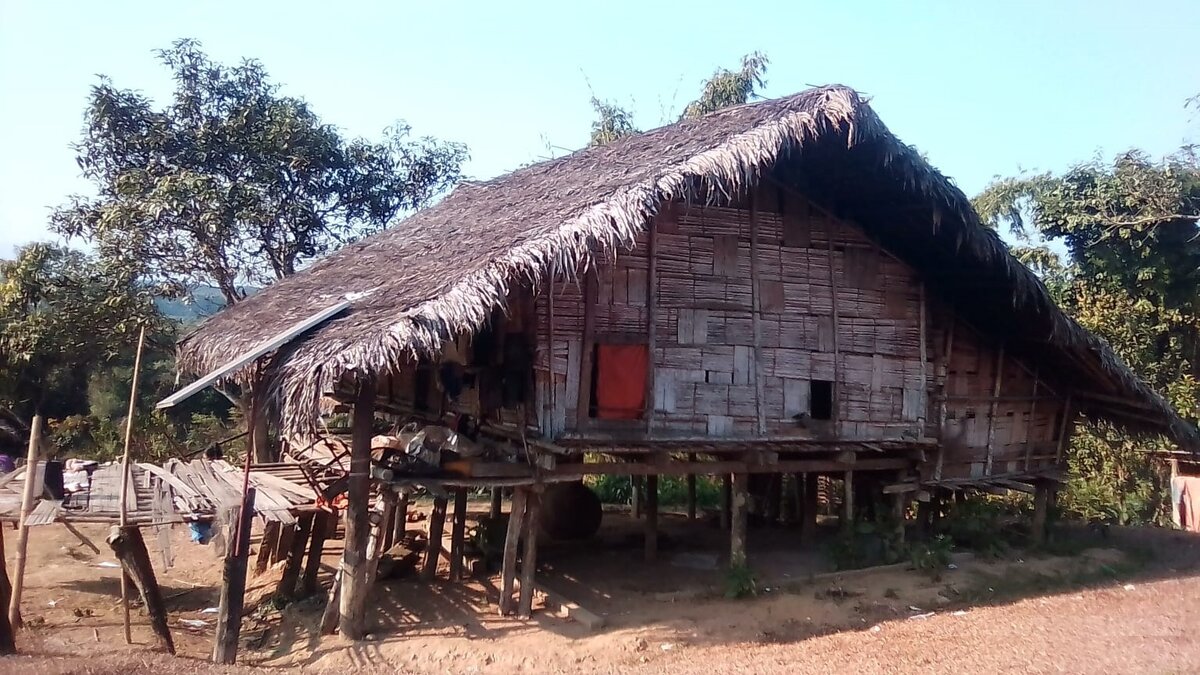 Towns already possess some infrastructure but villagers still do not have access to electricity and clean water. Photo by Robert Bociaga.

Scientists studying the impact of shifting cultivation across the tropics have similarly found that tenure systems are vital in resource management. Notably, communities use these systems as responsive tools to make changes to their surroundings.

“Our jhum cultivation is not harmful to the environment,” John Para says when asked about its negative impacts. “We live thanks to the forest; if we mismanaged it, we couldn’t survive until now.”

Every January and February, all men and women work cooperatively to clear and cultivate fields. After at least three dry weeks, each village clears the fields using controlled burning, a practice aimed at stimulating the germination of some beneficial forest trees. It releases soil minerals and decreases acidity, thereby strengthening seedling vitality. At the same time, it eradicates weeds, soil pathogens and insect pests. The crops are cultivated on the cleared fields for one or two years. Afterward, the land is left to naturally regenerate. 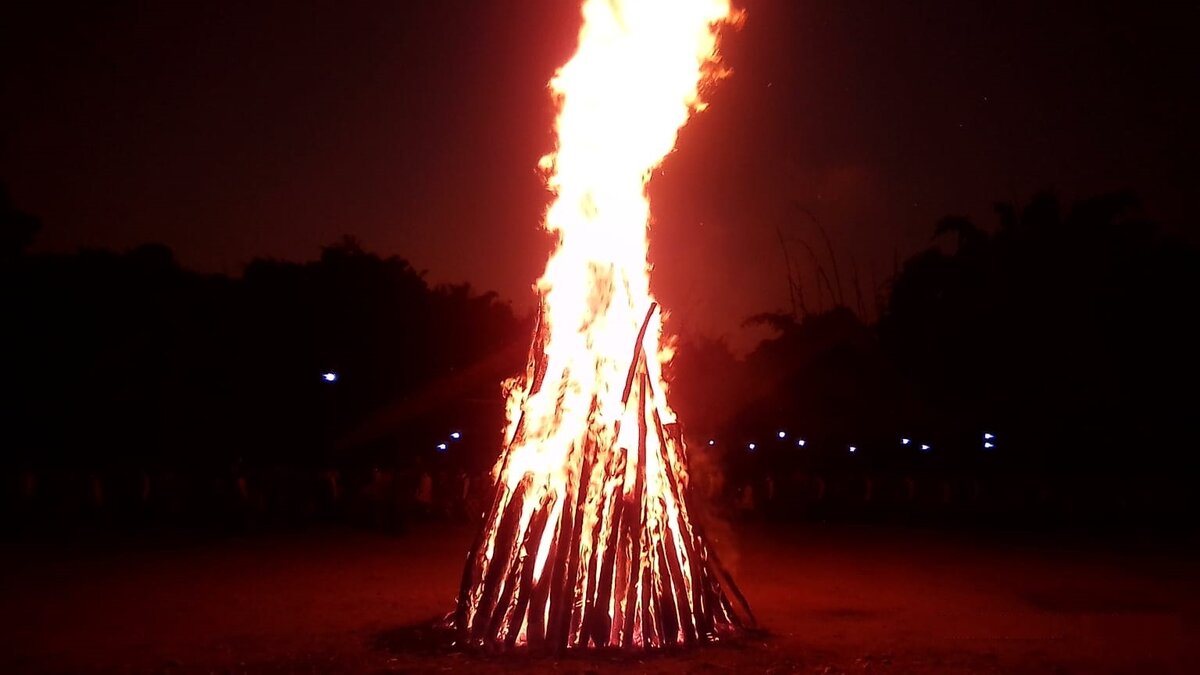 Big fire burns at every Naga Festival at the end of January. Photo by Robert Bociaga

The soil gets revitalized throughout this fallow period, similar to the natural organic cycle of the environment. The longer the duration of the fallow period, the better the quality of the regenerated soil. The process also increases the biodiversity of native species.

The Naga sell their agricultural products mostly locally. They also raise chickens and pigs, and hunt for wild animals for an additional source of meat. “The successful hunter needs to show respect to the forest and to the whole community,” says Lajau, an elderly face-tattooed village woman from Aung Mye, near Khamti. “That is why they can keep the animal’s head for themselves, and share the rest of the meat with other villagers.”

Keeping this tradition alive can be seen as a backbone of the inter-tribal system of resolving conflicts over land.

“We have never needed to revert to the outside courts or offices to settle our internal Naga issues,” says Le Sui Thwa, a member of the Para subtribe. He says that thanks to this customary system, they can arbitrate all disputes that arise between the members.

The Naga tribes were granted autonomy in the form of the Naga Self-Administrated Zone following the 2018 signing of a cease-fire that ended decades of conflict between tribal insurgent groups and the government. But many here see the arrangement as advantaging the government over the tribes.

“I feel like a guest on my own land,” says Jan Khine, a member of the Makury subtribe. “The officials want to govern us by their own rules.”

Competition over land and resources has driven dozens of conflicts across Myanmar. In many cases, those disputes are compounded by issues of identity, citizenship, and right to self-determination.

Historically, the Naga tribes established self-sufficient villages high up in the Naga Hills. They were well-known for ritual headhunting and face tattooing, but gradually abandoned these practices as they embraced Christianity, in some instances as late as the second half of the 20th century.

The role of traditional beliefs has been diminished; nevertheless, their relationship to the land should be interpreted through their indigenous culture. Deeply rooted to the land, their ceremonies are linked to jhum cultivation under traditional land management.

Apantsi Pamri, a member of the Long Phuri Naga community, says that in addition to their cultural bonds, providing the tribes with secure legal titles would help them to operate in a way that would both protect existing land and improve yields.

United Nations and forest law advisers from International Alert, a peacebuilding organization, say the Myanmar government needs to acknowledge the value of the customary tenure system. The incompatibility of state laws makes customary rights over the lands and forests of the Naga people more vulnerable than ever, threatening their livelihood, environment and culture.

All the Naga tribespeople interviewed for this story say they want to see the development, not the annihilation, of their culture. Julia Fogerite, a co-author of the RRtIP report, says indigenous knowledge supports ecological resilience by contributing to social security and cultural integrity. She says agriculture fallow systems must be recognized as equal to other forms of agriculture, and proposes that these valuable farming practices should be protected under the law, supporting the sustainability of all the ethnic tribes of Myanmar.