by NorthShore Counter-Info / It’s Going Down 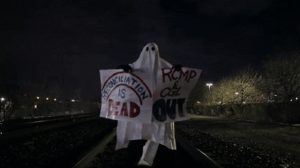 On Wednesday March 11, hours before the student walkout for Wet’suwet’en, fellow supporters continued to disrupt the Canadian economy by holding “Ghost Blockades” at the time of the morning commute. Activists in solidarity with the Wet’suwet’en and other Indigenous Land Defenders have planted harmless signals on train tracks in various parts of the GTA, forcing rail traffic to halt while officials investigate. Trains were stopped, but this time there were no visible activists on the tracks for the police to arrest and intimidate. As police forces escalate their responses to peaceful demonstrations on rails, land defenders and allies are finding ways to send their message without risking police aggression. Railway police and other workers will need to investigate each blockade to deem the tracks safe for further traffic. In the mean time, the message is clear: RCMP and CGL must leave Wet’suwet’en territory.

This was coordinated, but it was not organized by any one group, so there is no one to interview and no one to place the blame upon. For coordinators’ safety, no interviews can be granted. Please use the attached images freely, and please consider the following our comments in response to various questions the media may have. In some areas, the Ghost Blockade will have disrupted the morning commute as CP and CN tracks are shared with commuter trains. We realize this will delay both industries and individuals trying to get to work, and we prefer to temporarily rescue workers from their jobs rather than prevent them from getting home. We stand in solidarity with workers, as they are harmed by corporations’ control over their lives, and also fear the harm their children will face in the climate crisis.

We are disrupting colonial infrastructure in order to show “Canada” that we will not stand idly by as the rightful stewards of Turtle Island, living on their own land, are being violently arrested in order to push through a pipeline. We will not allow the colonial government to continue peddling the lie that Indigenous land is subject to foreign colonial laws. We do not accept the lie that pipelines, ongoing economic reliance on fossil fuels, and continued preferential treatment of private transnational corporations are a part of a climate-just future. We are not fooled by colonial institutional fetishization of “Reconciliation” (RIP) and its concomitant genocidal policies and “development” of the land. The colonial government has been trying to convince Canadians and the world of its legitimacy, and its rights to this land, but this is not the case even according to international courts. Moreover, the colonial government has been trying to convince us that the Wet’suwet’en people are not unified and that the relevant authority are the elected band councils who consented, but band councils are colonial structures that are economically dependent on the colonial government. People receiving money conditionally and coercively from the government cannot consent freely. The people of this land, settler, Indigenous, and migrant alike, are all rising up to show the government that we will not accept these lies, that we see the colonial government for the violent agent of corporations that it is, that we see the police as the violent thugs of the state that they are, and that we will fight for Indigenous people to have their land back.

As we must find ways to grind this broken system to a halt, we ask how any adult can condone the state repression of land defenders. We wonder at the cognitive dissonance of looking a child in the eye, believing that they should live in a just world with clean water, air to breathe, and food to eat, and still condoning the theft of land for extractive industries. We call on everyone living on this land to fight alongside us.