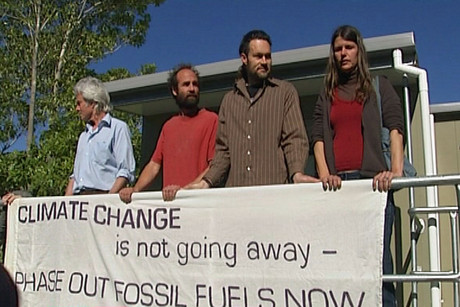 Campaigners are protesting outside the environment court in Christchurch as a legal bid to stop coal mining on the West Coast’s Denniston Plateau has got underway.

The coalmining debate has gotten louder today with the start of a four-week Environment Court hearing over a proposed opencast mine that would be New Zealand’s second largest.

An application has been lodged for resource consent for a 148-hectare opencast coalmine on the southern edge of Denniston Plateau, near Westport on the West Coast.

The Escarpment Mine project is almost entirely inside the Mount Rochfort Conservation Area, which is deemed ”stewardship” conservation land so is not protected from mining.

The application also sought consent to develop facilities to process, transport and stockpile coal, which covers about another 48ha.

The proposal prompted strong opposition from conservationists and nearby residents but the three commissioners who heard the resource consent application approved it in August last year.

As a result, Forest and Bird, the West Coast Environment Network and Fairdown-Whareatea Residents Association appealed their decision to the Environment Court. The residents have withdrawn their appeal after mediation but the remaining two parties are continuing.

The hearing starts in Christchurch today – an important test of the Government’s mining push and the biggest case Forest and Bird has taken to date.

It has taken more than two years to reach this stage since New Zealand company L&M Coal lodged a resource consent application in September 2010 for the mine. It was acquired by Australian company Bathurst Resources Ltd a month later in a deal worth more than $165 million plus ongoing royalties, according to the Overseas Investment Office, and renamed Buller Coal.

The application was publicly notified in late September 2010 and people had a month to submit their views. In total, 98 submitters, including groups and individuals, lodged 170 submissions, with 50 supporting the project, 41 opposing and seven were neutral.

Of those supporting the mine, most were individuals or couples with some families lodging numerous submissions.

Many of the groups backing it would benefit if it went ahead, including the Westport Harbour, Rochfort Coal, Kawatiri Energy, Fairdown Holdings, the then Ministry of Economic Development’s Crown Minerals group, Buller Holdings, Brookdale Mining and Brightwater Engineers.

Three commissioners appointed by the West Coast Regional Council and Buller District Council listened to 13 days of hearings in Westport in June and July last year.

Their approval was ”not without some considerable reservations and anguish” because of concerns of its potential environmental impact, they said.

However, money won the day.

”The most and almost overwhelming factor that we had to consider is the enormous financial benefit that the mine will bring to the Buller district and to the West Coast.”

Bathurst claimed the mine would generate an additional 424 jobs and $138m a year, including $41m in wages and salaries, during its predicted five year life.

That saw it meet one of the prime imperatives of the Resource Management Act to enable people to ”provide for their social and economic wellbeing”, the commissioners said.

If approved, the mine will become the second largest opencast coalmine after state-owned enterprise Solid Energy’s Stockton Mine on the Stockton Plateau, neighbouring Denniston.

However, the commissioners criticised the lack of information on Denniston Plateau, a rare landform of large sandstone pavements with cracks and gullies that led to the evolution of some unique species, such as the threatened giant carnivorous snail Powelliphanta patrickensis.

”Not a lot is known about this secretive creature and we were given no clear guideline on what impact the removal of the mine footprint from its habitat would have on its sustainability as a species.”

Despite the plateau’s long mining history, there was little information about the extent to which the Buller Coal Measures had already been modified and how species such as the snails had been affected, the commissioners said.

”It may well be that members of the public would wonder why we anguish over whether a few hundred land snails living in the back of beyond and the unusual landform that is the Buller Coal Measures that hardly anyone gets to see, are worth worrying about if even their complete loss is the cost to be paid for the hundreds of millions of dollars and the jobs that the mine will bring.”

If there came a time it was clear that mining would fatally injure species as the snails and great spotted kiwi, also present on the plateau, such a proposal could be rejected, they said.

They voiced serious doubts Bathurst’s proposed on and off-site environmental work would mitigate the mine’s impact.

The commissioners criticised the lack of an overall plan in considering future exploitation and development of Denniston and Stockton plateaux, calling for action by the Department of Conservation, the regional council and Buller District Council.

However, they refused to extend the consent period to 35 years or longer for its coal processing plant plus coal dewatering and stockpiling facility at Fairdown, which the company wanted to use for other mines it planned to develop in the area. It has more than 10,000ha of prospective mining tenure in the Buller Coalfield, including the Escarpment Mine project, Cascade Mine and the Whareatea West project.

”From the evidence presented to us, it is abundantly clear that large scale mining is poised to invade the entire Denniston Plateau coal reserves which, if unchecked, will totally destroy the ecosystems that are present. We have declined to grant such time extensions because we do not wish to provide any indication that future consents will be granted to undertake further mining in this area.”

In the build-up to the Environment Court challenge, Forest and Bird held a Denniston bioblitz in March to gain ammunition for its battle. More than 150 scientists and conservation volunteers spent two days scouring the plateau to document its native animals and plants.

The Environment Court has already ruled against letting climate change be considered when mining applications are heard.

While Bathurst waits for the latest court hearing’s outcome, it still needs an access agreement and concession from the landowner, the Conservation Department, to start mining. That application is still being processed but if approved, the decision will be publicly notified with submissions called and the mine’s merits further debated.

In May, West Coast Tai Poutini Conservation Board called for Denniston Plateau’s inclusion under schedule 4 for protection from mining and asked the New Zealand Conservation Authority to concur.

”It would be impossible to reinstate the sandstone pavements, the waterways and the unique landscape features,” chairwoman Clare Backes said at the time.

”Whatever happens, opencast strip mining will destroy the current rich mix of flora and fauna, which exist in the localised ecosystems.”

Bathurst has been actively expanding its mining on the West Coast.

In May last year, it bought the mining rights for Coalbrookdale Mine, which covers 341.4ha across three blocks on Denniston Plateau, paying owner Robert Griffiths, of Westport, US$12m (NZ$13.8m), 15 million Bathurst shares and royalties on the mine’s future coal production.

In June, it was granted a permit to explore 7290ha of Mokihinui for coal and other minerals over five years, less than a month after conservationists applauded Meridian Energy for ditching plans to dam the river.

It has also been granted exploratory permits in the 10 Mile area and Rocklands.

Its mining plans excite the region’s mayors, who have witnessed the economic downturn from the Pike River coalmine disaster in November 2010 and the mothballing of Spring Creek this month, jointly causing the loss of about 500 mining jobs.

And the Government too has made its views clear with Prime Minister John Key officiating opening Bathurst’s Wellington office in March.

Parliamentary Commissioner for the Environment Dr Jan Wright, whose great-great grandfather was a West Coast gold miner, is currently reviewing commercial use of conservation land, which covers about a third of New Zealand’s land.

Her report is likely to be released by mid next-year. She believes the ultimate goal of commercial use of conservation land is ”prosperity for posterity”.

As the commissioners said in their resource consent decision, the mine’s prospective wealth comes at a high cost.

”The real issue with this application is whether the cost is worth paying for the benefits that will be derived,” they said. ”It is the classic development/environmental conundrum.”

”If we lose Denniston Plateau to mining, basically the Government is telling us that development is ahead of retention of our unique natural heritage.”

Mark, one of Forest and Bird’s three ambassadors, said the world was watching what happened with the plateau.

”It’s our reputation as a country of high conservation value. We may lead the world in restorations and eradications but you can’t restore an opencast mine.”

– Generate an additional 424 jobs and $670 million for the West Coast economy for its assumed five-year life, although it sought consent to mine for 12 years.

– As mitigation for environmental damage, it offered to do biodiversity management for 5620ha in the Heaphy River catchment area to boost protection of great spotted kiwi, South Island kaka and Powelliphanta land snails.

– It proposed establishing a predator control programme on about 150ha area at Whareatea Gorge on the coastal escarpment, targeting possums, stoats and rats, plus instigate predator control in 1880ha on Denniston Plateau.

– Historically, most mining on Denniston Plateau was underground and less damaging to the environment

– Will create a precedent for further mining projects because Bathurst has mining permits for about 10,000ha of the plateau.