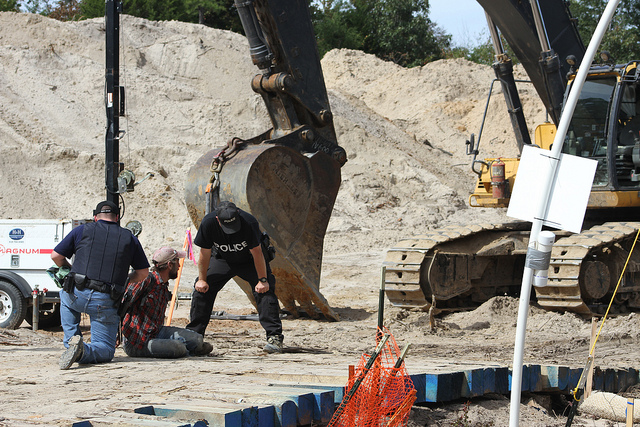 Why was that cop bumpin’n’grindin’ with the excavator in front of me?! I know that law and industry work hand-in-hand.. But this is too much.

[Yeah, that’s right. We EF! Journalistas occasionally escape the doldrums of office life and get out to the woods to raise some hell. The following is a first hand account, re-posted from TarSandsBlockade.org]

Monday’s early morning hike into the site of the tree blockade allowed me to see the lush and mature forest surrounding the Keystone XL construction first-hand. The abundant slash pine trees and beautyberry shrubs gave me a rush of energy that comes with unexpected sense of familiarity. I couldn’t help but think of the flatwoods of my home in Florida (what they call ‘piney woods’ out here).

So when we got to the massive industrial scar that now cuts through the forest, in preparation for a tar sands pipeline, the impact hit me that much deeper. Obvious wetlands and waterways were clearly trashed, and an absurd security force surrounded the aerial blockade site attempting to starve out the on-site resistance.

Confronting this destruction and repression was the dual reason we were there. The blockade needed a re-supply of food and water and TransCanada needed the message that scare tactics (including a recent wave of SLAPP suits against activists) would not stop the movement from growing.

While the effort at re-supplying the blockade proved difficult, the numbers of our team storming the site together, in multiple locations, allowed opportunities for work stoppages that would not have existed otherwise.

In one instance, the two-person team I was with was able to use the threat of countless numbers in the woods to talk equipment operators and their foreman into turning their machines off. With thirty minutes of hopping in front of five separate pieces of heavy machinery, and all the available police too pre-occupied to stop us, we ended up basically herding all the active equipment off-site.

We forced them to abandon the pipeline work being done to the immediate south side of the tree blockade. Some machines were even forced to reverse their morning’s work, since they could not legally leave their gaping holes in the land unattended.

For a short time the clamor of diesel engines ceased; songs of wind, birds and the wild hollering of our friends reclaimed the air. Unfortunately, our numbers were not great enough (this time) to sustain it for long, and police reinforcements came faster and more equipped than our own.

So the two of us hiked, and crawled, back up to the north end of the day’s action, where most of our numbers maintained support for the primary lockdown that was holding work there at bay. But the day wasn’t over yet.

And after a moment of water and rest, we re-assessed TransCanada’s work operations and our own capacity to confront them. Half way through the conversation, I watched a truck with pipeline equipment roll by and turn north onto the easement road. 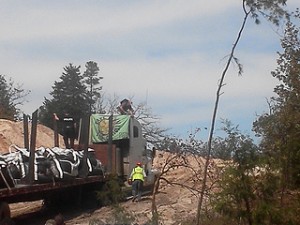 The conversation among comrades faded into the distance behind me, as I found myself scrambling onto the top of the truck and tying off a banner to the back of the rig in a blur of cops and cameras. Before long, I was in the back of a Sheriffs truck on a scenic tour en route to a concrete cell in the Wood County jail, longing more than ever for the familiar slash pines of home.

The booking and bonding process wasn’t too painful, and I’ll be back in Florida later this week. But, like most everyone else who came here for the TSB Action Camp, I’ll be leaving a piece of my heart in East Texas… that and an arraignment date.