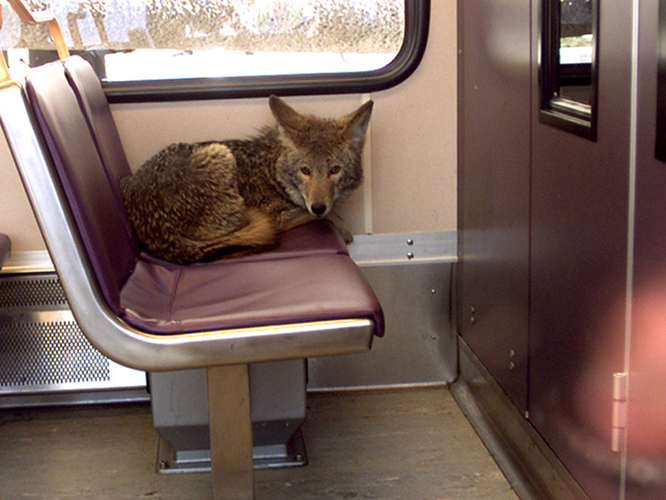 A coyote (without a metrocard!) takes a ride on a light rail train in Portland, Oregon, in 2002.

The world is undergoing the largest wave of urban growth in history. In 2008, for the first time in history, more than half of the world’s human population will be living in towns and cities.

Until recently, scientists who study wildlife thought coyotes couldn’t live in heavily populated areas. Wild carnivorous animals and humans don’t typically mix. But, as previously reported, those scientists were proven wrong. There have been coyote sightings in dozens of U.S. cities — Chicago, Portland, Seattle, even New York City. Like the fox, the skunk and the raccoon before it, the coyote is the latest predatory animal to make the city its home.

The animal’s presence in urban areas is an early indicator for what is to come: larger predators like wolves, mountain lions, and bears.

About 5 miles from Chicago O’Hare International Airport is the smallest coyote territory ever found, which takes up all of a third of a square mile. Coyotes surviving in such a small area means they have plenty of food on which to survive. “They’re finding everything they need right there, in the suburbs of Chicago,” Stan Gehrt, an Ohio State University researcher, said in a statement. “It amazes me.” Regular dumpster-divers might not find this so surprising, with edible non-consumer (that’s straight off the store shelf, into the dumpster) waste in America alone totaling about 9.3 billion pounds per year. (Factoring in “individual post-consumer”, some reports come out with annual US food waste closer to 25 million tons!) 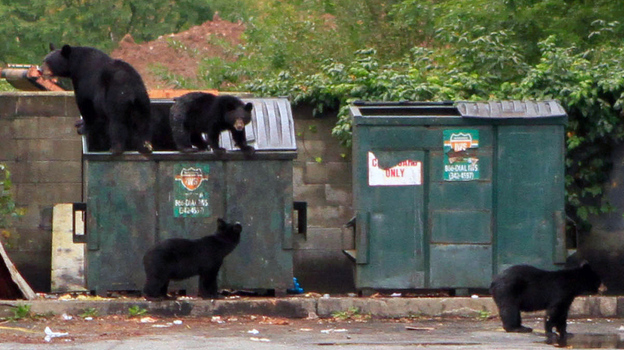 He said the way coyotes have adapted to city life is a model for how larger animals could do the same. Unlike in rural areas, urban coyotes are the top predator — there’s no animal above them on the local food chain. Gehrt said humans are the only animals that pose a threat to urban coyotes, and the wild canines have taken some remarkable steps to avoid encounters with us.

They’re doing things we didn’t think they could do,” he said. “They became totally nocturnal. They’ll eat human food. They became really good at finding natural prey, even in areas of concrete and steel.”

Gehrt said coyotes now have longer life expectancies in downtown Chicago than they do just 50 miles away in the cornfields of rural Illinois, where they have to dodge trappers and hunters to stay alive. His research has revealed some surprises: For example, unlike their rural kin, urban coyotes are monogamous, sticking with one mate for life. That’s pretty rare in the animal kingdom, he said.  In comparing his findings about coyote survival in cities to research by another group on those living in rural areas, Gehrt has found that the urban coyote pup survival rate is five times higher than the rate for rural pups. In both environments, humans are the coyotes’ primary predator, either through intentional removal or accidental death from automobiles.

Coyotes are usually docile around people, and there is only one known case of the animals killing a human adult — a lone hiker was reportedly attacked by two coyotes in Nova Scotia in 2009. Larger predators might be a different story…

On the one hand, it’s hard to see how an animal as large as a bear could become as inconspicuous in urban areas as coyotes have become. But on the other hand, we’re already getting more bear sightings in suburban, residential areas — places like Reno, Nev., Missoula, Mont., and Boulder, Colo. Gehrt said, in some Eastern European cities, brown bears are foraging through trash at night, “acting like raccoons but hundreds of pounds heavier.”

In South Africa, the collision of animals that have lost habitat with humans takes a hilarious turn, with baboons hijacking cars! With natural habitat for all animals in America shrinking, our cities are the next wildlife frontier.

Check out the original story at NPR