“After nearly four years in the criminal justice system and 14 months in prison, I have decided not to continue my appeal through the federal court system. I greatly appreciate the pro bono efforts of Ron Yengich, Liz Hunt and Pat Shea, who have defended me in the courts and articulated the issues of the case. I am also grateful for all the support I have received thoughout this process, especially from Peaceful Uprising and the First Unitarian Church in Salt Lake City. 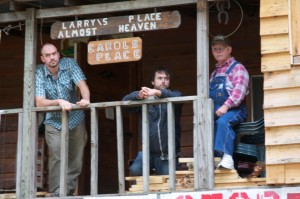 Throughout every stage of this legal process, it has been a predetermined  conclusion that I should be punished for standing up to the collusion between  government and corporations. Any potential discussion of ethics, justice or the  role of citizens has been banished from the court. The government insisted  on this back in 2009 when they wrote that such discussions should be  relegated to “the public square, not a court of law.” The first development in  this case was a preemptive motion by the government to limit our defense, setting the stage for the trivialities which followed. As a result, our  defense team has been restricted to debating a narrow range of technicalities  rather than the critical issues of the case.

When a conviction is overturned, it is often reported that the conviction was overturned “on a technicality.” Yet is almost never mentioned that every conviction is obtained and upheld on a technicality. Technicalities are the entire foundation of a legal system which has closed itself off to questions of morality and justice. Weighing these questions is the function of a jury, whose role as
designed by our founding fathers is to protect fellow citizens from the government. But Judge Benson and the US Attorney’s Office insisted on preventing the jury from fulfilling their duty.

During the voir dire, the US Attorney’s Office was nearly apoplectic when it was suggested to potential jurors that they should use their conscience. After telling jurors that it was not their job to think about what is right or wrong, Judge Benson blocked evidence of government wrongdoing on the grounds that it would “confuse the jury.” That kind of contempt and fear of citizen participation in government is the hallmark of tyranny and the pathway to oppression.

To continue debating technicalities through further appeals would only serve as a distraction from the critical discussion of how citizens should hold their government accountable. If there is any hope of this country ever getting a justice system worthy of the name, that hope lies in fully informed juries of ordinary citizens, not in judges protecting the interests of the powerful.

Throughout my incarceration I have witnessed the direct personal impacts of a legal system obsessed with technicalities rather than justice. The prisons I have been in are filled with nonviolent inmates suffering from mandatory minimums and other policies which are completely detached from the best interests of the individual or society. The injustice on display in my case is truly systemic, and we will put our continuing efforts toward creating a system of genuine justice for all.”    – Tim DeChristopher 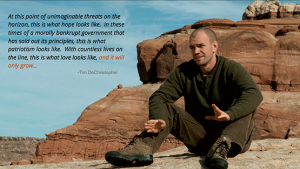 “For me, I think it is very sad that he stands convicted of two felonies and  continues to be held in federal prison in a case wherein the Government  conceded on appeal that there was legally insufficient evidence to sustain  either conviction, and only argued procedural issues.  I do not see how it is in  anyone’s interest for our government to prosecute, convict, and imprison someone and not take meaningful corrective action when it is recognized that there is legally insufficient evidence to justify the convictions.“

Tim DeChristopher’s 3 1/2 year struggle within the US Justice System has come to a close, but the battle for a livable future continues.  Get involved.  Act. Organize.

The Climate Justice Movement stands behind you