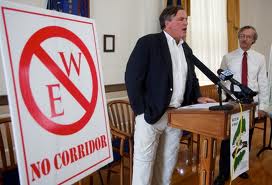 Restore: The North Woods and Forest Ecology Network blasted Cianbro Corp.’s East-West Highway proposal on Monday, charging that the likely route would affect conservation sites and hurt the state’s economy by damaging its “brand” as a wild and natural place.

At a press conference in Portland City Hall’s State of Maine Room, Jonathan Carter director of Forest Ecology Network suggested that the highway proposal actually was secondary to industry’s desire to have a potential resource and utilities corridor across the state with transmission lines carrying power and telecommunications and pipelines carrying tar sands gas, oil, water and other resources.

Jym St. Pierre director of Restore: The North Woods revealed a map of conservation areas in the state.  “It appears that the proposed East-West corridor would cross, come perilously close to, or be in the viewshed of, more than five dozen significant conservation and recreation areas,” St.Pierre said.  “Maine people should be paying special attention to a number of crucial concerns. Those concerns include environmental impacts to Maine’s water, wildlife, wetland, forest, air and climate resources.”

Around the state opponents of the proposed east-west highway have been speaking out. At a  morning meeting of the Piscataquis County commissioners. More than a dozen members of the Friends of Piscataquis Valley voiced opposition or provided alternatives to the four-lane, 220-mile highway from Coburn Gore to Calais proposed by Cianbro President and CEO Peter Vigue.

Hundreds Packed a Dover-Foxcroft gymnasium on May 31st to speak at a Public Forum set up to pitch the idea by Peter Vigue, Cianbro’s CEO.  Concerned citizens held a pre-event protest rally across the street from the event.

At a previous Piscataquis County commissioners meeting on May 15th more than 50 people stood out side of closed chamber doors, dozens holding signs in protest, after the meeting was quickly filled up.