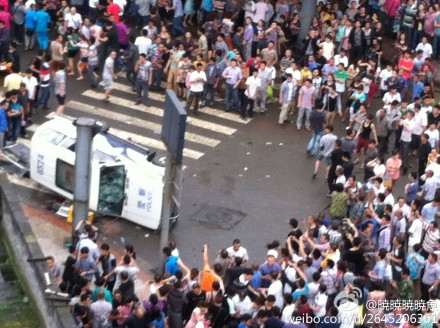 Following three days of mass protest, overturned police cars, tear gas and violent clashes between protesters and riot police, the city government of Shifang in the province of Sichuan, southwest China, announced last week that it is scrapping plans for a copper alloy plant. This is but one of dozens of industrial projects that have been successfully defeated by large scale protests and riots in China in recent years. As in protests elsewhere in China, enraged activists stormed the city’s government headquarters and staged a successful occupation.

“We have so many people in Shifang. We aren’t afraid of them (the authorities),” an 18-year-old activist boldly stated to Reuters by telephone from Shifang just before the government acquiescence to demands. “The Shifang people will definitely not surrender.”

But the victory comes with serious sacrifice. Dozens of protesters have been  injured and many more rounded up and detained. Their legal future is uncertain.If similar post-protest crack-downs are of any insight there will be dozens of more organizers rounded up in the months to come as government attempts to quiet such protests publicly is countered by a private draconian witch hunt to silence “ringleaders.”

The government has accused the banned spiritual movement Falun Gong and the Dalai Lama for instigating the violence. But these are the common scapegoats used by the government anytime popular uprisings take place in China.

A Letter of Resistance in Shifang 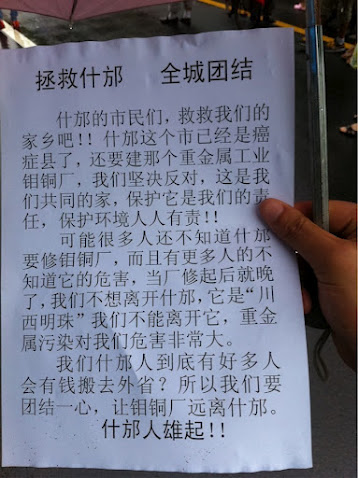 The following is a translation of a handout posted around the city of Shifang in the lead up and during the protests.

Save Shifang! All City Residents Unite!

People of Shifang, let’s save our city!! It already a “cancer town,” and they still want to build that molybdenum copper plant. We resolutely oppose this! This is our shared home, and it is our responsibility to protect it. Everyone is responsible for protecting the environment!!

Perhaps many people still do not know Shifang plans to build a molybdenum copper plant, and still more people do not know the damage this will cause. Once construction of the factory begins, it will already be too late. We do not want to leave Shifang! Shifang is the “Bright Pearl of Western Sichuan.” We cannot leave! Heavy metal pollution will cause us terrible harm.

Are there really that many Shifang residents who have the money to move to another province? We must come together and work to keep the molybdenum copper plant far from Shifang!

People of Shifang, rise up!!