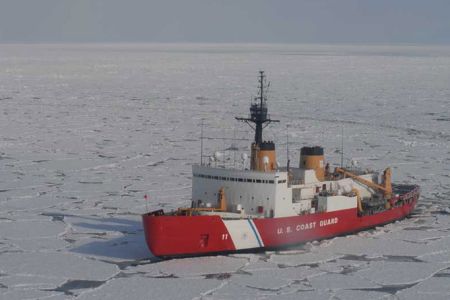 US Coast Guard ice-breaker in the Beaufort Sea. The USCG has vowed to create a barrier between environmentalists and Shell Oil, who will begin drilling exploratory wells in sensitive Arctic waters this summer. (USCG)

The United States Coast Guard will establish and enforce “a 500-meter safety zone” around the Shell Oil Company’s drilling vessel Noble Discoverer as it drills exploratory offshore wells in the sensitive Arctic waters off the coast of Alaska beginning this July.

The ‘buffer zone’ would apply to all vessels, but the ‘special rules’ are clearly designed to make it more difficult for those trying to protest against the Shell’s oil drilling in the Chukchi and Beaufort Seas this summer.

“For any group or individual intending to conduct lawful demonstrations in the vicinity of the Noble Discoverer,” reads the USCG memo, “These demonstrations must be conducted outside the safety zone.”

While acknowledging the negative impact on the “environment and indigenous people” a mid-ocean collision caused by environmental activists attempting to block or board the ship could have in the Arctic, the USCG report made no mention of what impact a massive oil spill in the area would have on the same.

Reporting by the Courthouse News Service clarifies that the Puget Sound safety zones created by the USCG are separate from those established by the federal judge in Alaska earlier this year, which specifically prohibit Greenpeace from coming within 500 to 1,000 meters of the ships when they are within 12 miles of shore. The Coast Guard stressed that it is not required to enforce that injunction and that its rules apply to all vessels whether or not they are acting on behalf of Greenpeace.

During recent comments made at the Rio+20 Earth Summit, Greenpeace director Kumi Naidoo, who was arrested last year for scaling a drilling ship in the Arctic waters off Greenland, said that his organization would be not discouraged or intimidated by such injunctions.

“We have been warned there will be severe penalties but I now serve notice on Shell that we are at the point where, if needs be, we will break the injunctions and pay the price of that,” he said.

Arguing the danger of allowing Arctic drilling was too high to ignore, Naidoo said his group would intensify its efforts, not soften them. “It is only when decent men and women said ‘enough is enough’ and ‘no more’ and were prepared to put their lives on the line and go to prison if necessary, and that is where we are. We have to intensify civil disobedience.” Common Dreams

Though public comments on the rule were accepted by the USCG, according to Common Dreams, only three comments were submitted and no public hearings were held on the issue. In a separate Department of Homeland Security document, also posted by Cryptome, the USCG was allowed to skip public comment because “immediate action [was] necessary to protect the public from the threat to navigational safety posed by” the tactics of environmental activists:

“The Coast Guard is issuing this temporary final rule without prior notice and opportunity to comment pursuant to authority […]. This provision authorizes an agency to issue a rule without prior notice and opportunity to comment when the agency for good cause finds that those procedures are “impracticable, unnecessary, or contrary to the public interest.” Under 5 U.S.C. 553(b)(B), the Coast Guard finds that good cause exists for not publishing a notice of proposed rulemaking (NPRM) with respect to this rule because it would be impracticable. Due to the hazardous conditions discussed below, it is necessary to make this regulation effective immediately in order to ensure the safety of the maritime public while the named vessels are transiting.” cryptome.org

Earlier this year a federal judge specifically forbade the environmental group Greenpeace from coming within 1,000 meters of Shell’s drilling vessel while stationed in Puget Sound in Washington state. readersupportednews.org