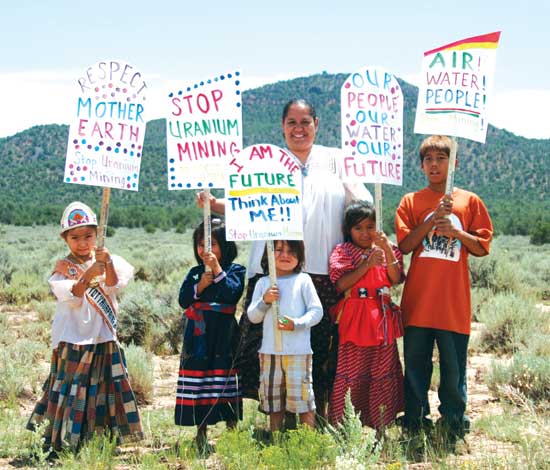 GRAND CANYON NATIONAL PARK— The U.S. Forest Service announced late Monday that it will allow Denison Mines Corp. to begin excavating the “Canyon Mine” this fall without first updating the 26-year-old environmental impact statement for the uranium mine, located due south of Grand Canyon National Park on the Kaibab National Forest. The Service claims no new public review or analysis is needed because there is no new information or circumstances relevant to its original analysis.

“It is impossible to imagine how the Forest Service, with a straight face, can say that no additional environmental analysis is required for Canyon Mine, when the analysis is totally dated — more than 26 years old — and when so much has changed,” said Sandy Bahr, chapter director for the Sierra Club’s Grand Canyon Chapter. “This mine was and is hugely controversial as it threatens Native American cultural sites, groundwater and ultimately the springs of Grand Canyon, and numerous wildlife species. It is irresponsible to allow it to go forward without looking at these important issues and being honest with the public about the impacts.”

The Canyon Mine is located in the 1 million-acre watershed where new uranium mining was banned by the Obama administration in January. Although the so-called “mineral withdrawal” prohibits new mining claims and development on existing claims lacking valid existing rights, it allows development on claims whose existing rights are deemed valid— such as the ones the Forest Service just granted to Denison for the Canyon Mine based on “current economic conditions.” Four uranium mines within the withdrawal area, including the Canyon Mine, have been on standby status — neither operating nor reclaimed — since uranium-market downturns in 1992. One of those mines, Arizona 1, resumed operations in 2009.

“We now know uranium mining threatens permanent, irretrievable damage to Grand Canyon’s watershed, yet the Forest Service pretends we’ve learned nothing in the past quarter-century,” said Taylor McKinnon, public lands campaigns director at the Center for Biological Diversity. “This dangerous proposal should never have been approved back in 1986, and rubber-stamping it a generation later is an insult to the public, American Indian tribes and Grand Canyon National Park.”

Uranium mining at the Canyon Mine threatens to contaminate and deplete shallow and deep aquifers that feed Grand Canyon’s springs. State and federal agencies do not require deep aquifer monitoring to detect contamination plumes, they do not require remediation plans or bonding for correcting aquifer contamination if it does occur, and they cannot guarantee such damage won’t occur.

“The Forest Service review ignores significant new evidence from the Orphan, Kanab North and other uranium mines that show how soil and water contamination can occur well beyond the mine sites,” said Roger Clark, Grand Canyon program director at the Grand Canyon Trust. “We are also disappointed that the review team did not include experts from the U.S. Geological Survey, U.S. Fish and Wildlife Service and National Park Service.”

The uranium industry has filed four separate lawsuits challenging the Obama administration’s January decision to withdraw 1 million acres of public land surrounding Grand Canyon National Park. Represented by attorneys at Earthjustice, the Havasupai Tribe, the Center for Biological Diversity, Grand Canyon Trust, National Parks Conservation Association and Sierra Club are intervening in each of those lawsuits to defend the decision to protect these lands.