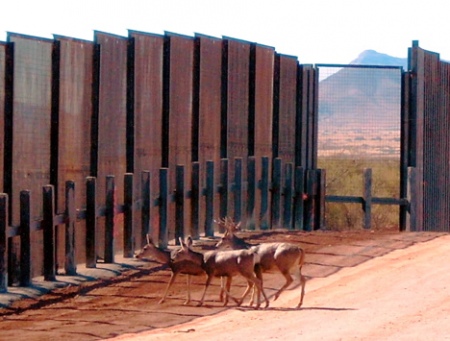 from the Arizona Daily Star

WASHINGTON — The Republican-controlled U.S. House approved a bill today that would allow the Border Patrol to circumvent more than a dozen environmental laws on all federally managed lands within 100 miles of the borders with Mexico and Canada.

The newest member of Congress, Tucson Democrat Ron Barber, crossed party lines to vote for the bill shortly after he was sworn into office Tuesday.

“Border security is the No. 1 priority for the people who live and work along our nation’s southern border,” Barber, who represents portions of the Arizona border region with Mexico, said in a written statement. “There is no doubt that this bill will make our borders more secure. But this legislation is far from perfect and I will work to make changes as it moves through the process.”

Tucson’s other House member, Democrat Rep. Raúl Grijalva, voted against the bill, saying it would sacrifice crucial environmental protections to advance an anti-immigrant and anti-regulatory agenda.

Besides the border measure, the bill also would transfer control of more than 65,000 acres of centuries-old trees in Alaska’s Tongass National Forest to a private corporation.