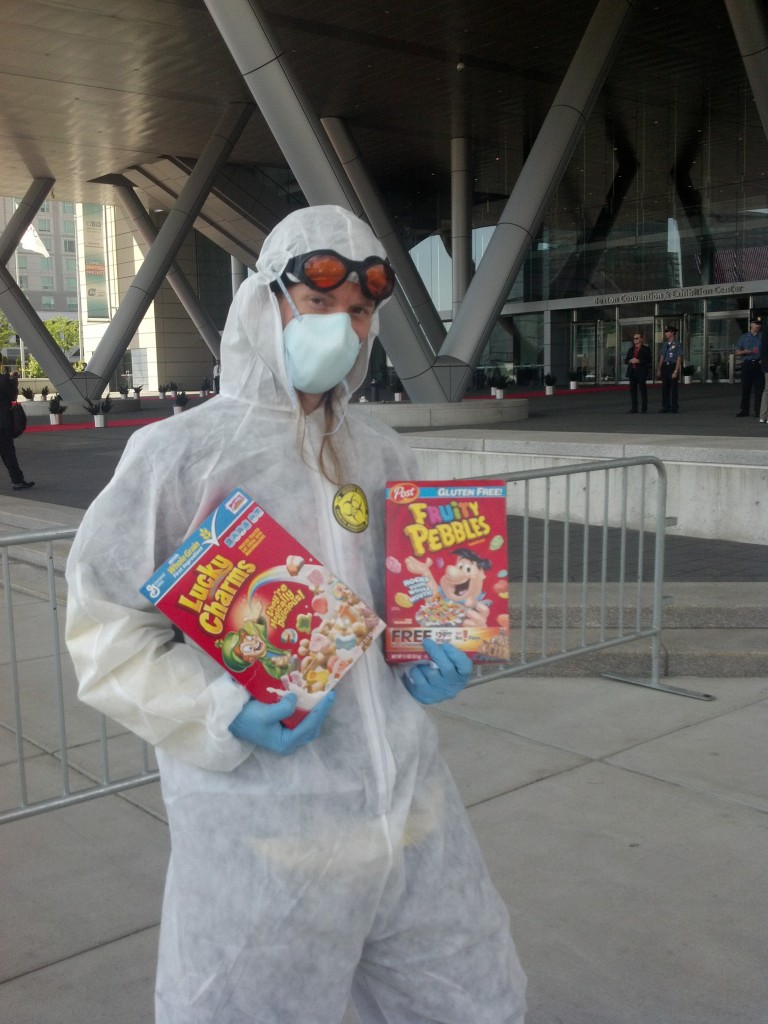 Dressed in contamination suits and waving around boxes of children’s cereal they say are pumped with Genetically Modified Organisms, protesters planted themselves outside of the International BIO Convention Monday to fight against a week-long meeting of mega-companies and biotechnology firms.

According to the group of activists, some of whom traveled all the way from Washington, D.C., while the “1 percent discusses industry strategies that compromise…biological heritage” inside the convention, protesters planned on educating the public, hosting sidewalk sessions, about pesticides, organic foods and anti-biotech initiatives.

Madrid is a member of Occupy Monsato, a group fighting against the multinational agricultural company and producer of genetically engineered seeds.

The group, which banded with members of Occupy Boston and others during Monday’s protests, will be holding larger rallies against the company in the future.

Chris Rotten, who held a box of Lucky Charms and Fruity Pebbles while wearing a HAZMAT suit, asked people coming into the convention if they had their daily dose of “GMOs.”

“It’s should be ‘UnLucky Charms.’ We have been duped by the FDA,” said Rotten. “People don’t intend to be part of a corporate experiment. We are just guinea pigs.”

The convention, which runs from June 18 through the 21, is slated to bring thousands of biotech firms and businesses to the Bay State and pump close to $26.8 million into the local economy, according to officials from Mayor Thomas Menino’s office.

To attract some of those global businesses to the Hub, Menino and staff form the city’s Boston Redevelopment Authority have implemented a plan to “pitch hot prospects,” including tours of Boston’s life sciences clusters and meetups with CEOs.

“Boston is a global life sciences hub – a super cluster – it is innovation, collaboration and success. I’m pleased to invite the world to our city,” Menino said in a statement.

Governor Deval Patrick kicked off the week long event, welcoming businesses to Boston, during a speech this morning.

“Hosting all this talent from all around the world is a great opportunity for us to showcase our super-cluster here, build on relationships we already have and create some new ones,” said Patrick. “I look forward to meeting with top executives and government leaders to explore opportunities for collaboration and I encourage all BIO participants to do the same.”

Protesters did not go inside the event because the amount it cost to attend. They said they didn’t want to give additional money to the large corporations.