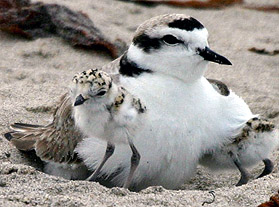 “Protecting critical habitat will help this lovely shorebird continue on the path to recovery,” said Tierra Curry, a conservation biologist at the Center. “Species with federally protected habitat are more than twice as likely to be moving toward recovery than species without it, so this puts a big safety net between plovers and extinction.”

Plovers are recovering but still face many threats, including widespread and frequent disturbance of nesting sites by humans, vehicles and off-leash dogs; crushing by off-road vehicles; global climate change; pesticide use; and habitat loss.

The western snowy plover was first granted 19,474 acres of critical habitat in 1999. In 2005 the Bush administration illegally reduced the critical habitat to 12,145 acres, eliminating protection for thousands of acres scientists believed necessary for the snowy plover’s survival and abandoning key habitat areas crucial for recovery. In 2008 the Center sued over the unlawful reduction of the plover’s habitat protections, leading to a settlement agreement with the Service and today’s revised designation.

Today’s final rule includes the reinstatement of habitat areas identified by government scientists as essential that were improperly withdrawn in 2005; inclusion of some areas not currently occupied by plovers but important for their recovery; and addition of habitats such as back-dune systems in an attempt to offset anticipated effects of sea-level rise caused by climate change.

The western snowy plover is a shy, pocket-sized shorebird that weighs less than two ounces and lives for three years. Plovers forage for worms, insects and crustaceans in wet sand and in kelp that has washed ashore. The word “plover” is thought to come from the Old French “plovier” or “rain bird” because plovers were seen on sandy French beaches during spring rains.