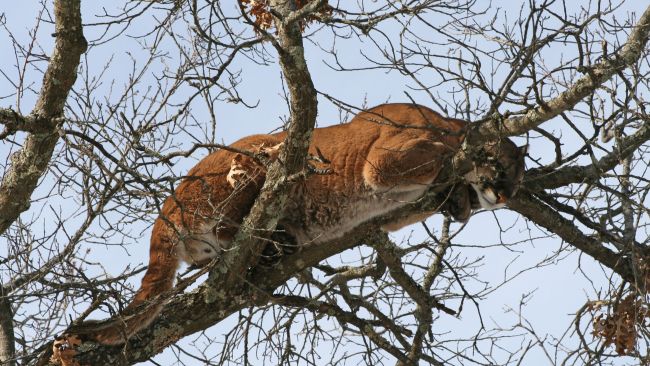 This Wisconsin Department of Natural Resources photo shows a cougar in a tree west of Spooner, Wis. Cougars are repopulating the Midwest a century since the generally reclusive mountain lions were hunted to near extinction in much of the region, according to a new study in The Journal of Wildlife Management.

ST. LOUIS — Cougars are again spreading across the Midwest a century after the generally reclusive predators were hunted to near extinction in much of the region, according to a new study billed as the first rigorous statistical look at the issue.

The findings, detailed in The Journal of Wildlife Management, showed 178 cougar confirmations in the Midwest and as far south as Texas between 1990 and 2008. While confirmed sightings of Midwest cougars were sporadic before 1990, when there were only a couple, that number spiked to more than 30 by 2008, the study shows.

Researchers said the study poses fresh questions about how humans and livestock can co-exist with the re-emerging predators, whose movements appear to be following natural dispersal instincts.