Nathan VanderKlippe and Dawn Walton / The Globe and Mail 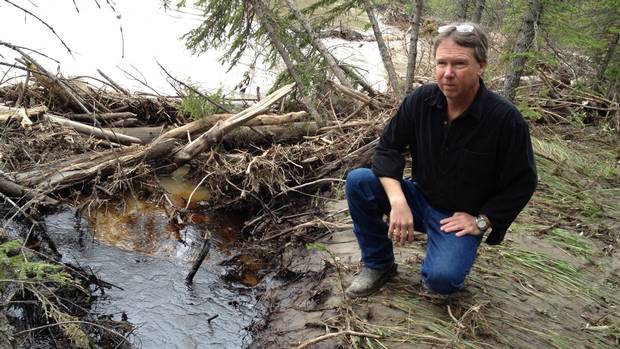 Gord Johnston grew up on the banks of the Red Deer River, at a place his family first settled in 1939. On Thursday evening, just before 7, he returned home to the nauseating smell of crude oil in the air.

Little more than an hour later he was in a helicopter, flying down one of Alberta’s principal waterways, where he saw a wide plume of oil flowing along the banks of a river that had already flooded its banks, running heavy with rainfed spring melt.

The oil, some 1,000 to 3,000 barrels of which spilled from a pipeline owned by Plains Midstream Canada, stretched nearly 10 kilometres up-river from Mr. Johnston’s 57 acres on the Red Deer River. As they flew in the helicopter, the source of the leak was obvious: “You could see it boiling up where the line crossing was,” Mr. Johnston said.

The oil was surging up into the river from below, where a pipeline owned by Plains Midstream Canada ran. That company, in an early press release, said the oil leaked into a creek leading into the river. Mr. Johnston saw differently. It was leaking from underneath the river itself.

In the following hours, he and his wife Bonnie would also see an oil-stained young beaver, a dead oil-covered whitefish and mats of grass and debris and brush and tree root covered in oil from the flooding river. As they battled headaches and nausea, and prepared to leave for a hotel — no oil company had yet contacted them to offer accommodations — they also faced a heartbreaking question: are their decades on the Red Deer over?

“How do you clean that up?” Mr. Johnston said, as he drove a reporter through his property, large portions of which are now stained with oil.

“My place is destroyed,” he said, as he prepared to abandon home, hoping that someone would offer security to protect it in his absence. “My whole life’s work is gone. I’ve pretty well lost it all here.”

Adding to his concern: there are no booms anywhere near his place. Workers, instead, have concentrated their efforts on cleaning the spill some 30 kilometres away, at a dam, as they attempt to keep the oil from making it to the city of Red Deer, which uses the river as its primary water source.

Plains Midstream Canada said it was notified about the leak near Sundre, Alta. Thursday night. The leak is 160,000 to 475,000 litres in size, which Plains Midstream said was released into Jackson Creek.

Plains Midstream dispatched aircraft to survey the damage, which local residents expect to be significant, with the Red Deer River currently flooding.

By 9:30 Friday morning, the Energy Resources Conservation Board said an “unconfirmed volume” of hydrocarbons had made their way into the Red Deer River through the Jackson Creek spill. The ERCB said in a statement it is investigating and working with the company as well as provincial government officials to clean up the mess and prevent more oil from leaking.

The pipeline is now shut and emergency responders on site.

Leslie Chivers, a spokesman for the city of Red Deer, said residents don’t need to boil water or worry at this point. Officials expected the spill to be contained and cleaned up before it hits the city and its drinking water supply. Red Deer also has backup sources of water.

Due to heavy rains and mountain snow melt, the Alberta government has issued several warnings including high streamflow advisories for the Red Deer River and its tributaries, but no major flooding is expected. There’s also a flood warning for the nearby Little Red Deer River, which is expected to peak by Friday morning.

“I would expect that the vast majority of it will end up in the Red Deer River,” said Bruce Beattie, reeve of Mountain View County. “It’s a major concern.”

The spilled oil is light sour crude. The pipeline was not operating at the time, and Plains did not detect the leak itself — a pattern that has reoccurred at numerous recent spills. The company was informed of the leak by the Sundre Petroleum Operators Group, a not-for-profit society established to help navigate issues between oil companies and residents.

While the oil continued to flow through the waterways Friday morning, no booms to contain the spill were visible and the smell of crude hung in the air.

“Light sour crude oil has a strong petroleum odour but this odour does not pose a health or safety risk to the public,” Plains Mistream said in a statement, “Plains is monitoring air and water quality closely and will notify residents of any changes.”

Plains Midstream, a subsidiary of Plains All American American Pipeline LP, is the same company that saw a 28,000-barrel spill in northern Alberta last year. That spill on the Rainbow pipeline was discovered in late April of 2011. It halted operations on some stretches of the Rainbow line until late August.

Alberta has suffered a string of oil leaks, including a recent spill that was discovered May 19 from piping attached to a well owned by Pace Oil & Gas Ltd. That spill, Pace said this week, was smaller than the 22,000 barrels initially believed. Pace said it was less than 5,000 barrels, although the actual quantity of spilled oil did not change much. Pace initially believed the spill was 70 per cent water. It now says it was entirely light oil.

Plains said it intended to release more details on its spill later this morning.

Oil spills into waterways are considered particularly serious, since water can so rapidly spread a spill, and substantially worsen the impacts of the oil.

Mike Hudema, a campaign manger with Greenpeace Canada, said this is the latest incident in a worrisome trend and signals the need for a fully-independent public review.

“It does raise a lot of questions about general pipeline safety in Alberta,” he said.