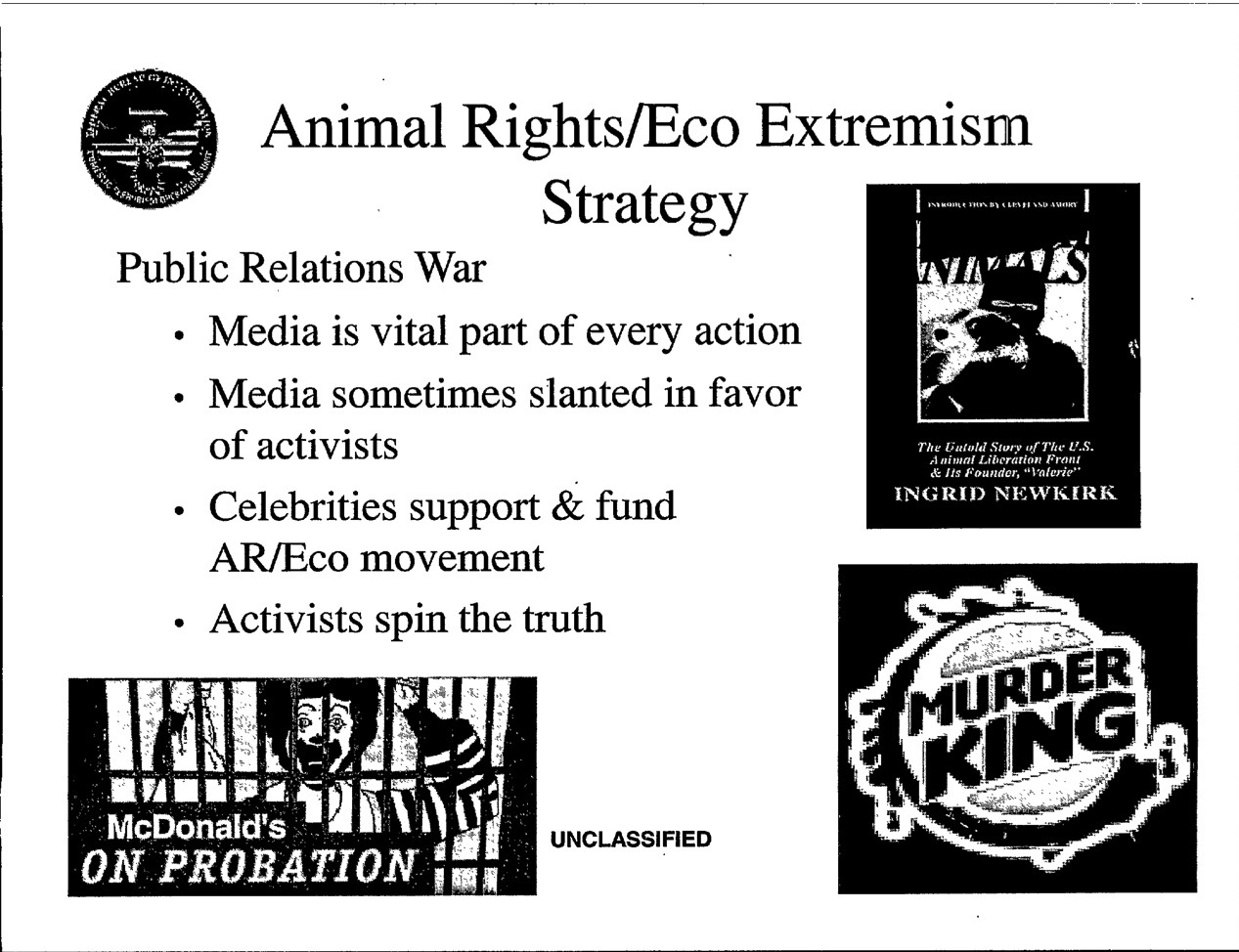 The FBI have broadened the rhetoric used against even non-violent groups, citing them as “domestic terrorists” and the definitions continue to broaden. For instance, as highlighted in a recent article found on Green is the New Red, the Animal Enterprise Terrorism Act was drafted to target anyone who causes the “loss of profits” of an animal enterprise. The FBI acknowledges this shift in “terrorism” investigations in a slide that says the new law “alleviates the use of force or violence criteria.”

“The domestic terrorism training materials were obtained through the Freedom of Information Act by the ACLU. They offer additional insight into a disturbing pattern of FBI activity misrepresenting political activists as “terrorists” and manufacturing “domestic terrorism threats” where none exist, akin to the notorious COINTELPRO program of J. Edgar Hoover.”

During these trainings, the FBI have particularly focused on information gathering and what it calls a “public relations war” by activist groups. In a bout of irony, the FBI turns the script on activists: “Media is sometimes slanted in favor of activists,” the FBI says. “Activists spin the truth.”

Activists spin the truth? Interesting concept coming from a government organization. In a country that lives in the shadow of corporate media lies that protect the corporations killing our planet, livelihoods, and communities, the need for independent journalism is more important than ever.

As we make preparations to celebrate the International Day of Solidarity for Marie Mason, Eric McDavid, and other political prisoners on June 11, it is within a climate of increasing violence toward resistance culture. As a movement of social and environmental justice activists, it is imperative that we continue to grow, create more allies, continue to do outreach, circulate information, support our prisoners and support each other. Our greatest defense in the war against terrorist allegations is an impenetrable movement. The Earth First! Journal is currently accepting responses from the movement on increased government oppression on environmental and animal rights activists for the next issue due out in the Fall.

Please consider supporting the work of the Earth First! Journal by subscribing to the newswire, publication, or making a donation– take advantage of our Limited Time Offer of 33% off of a Journal subscription.