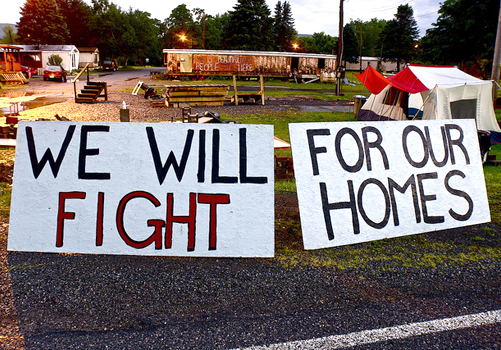 The Riverdale Mobile Home Park in Jersey Shore, PA is under major threat of eviction due to plans to build a 3 million gallon PER DAY water withdrawal site at the property to service natural gas drilling. Beginning June 1st,  Aqua America, a company partnered with Penn Virginia Resources (PVR) wants to begin their work, but first they need to displace over thirty families in the park’s tightly-knit community.

Residents of Riverdale, joined by supporters, are blockading access to a mobile home community that is facing imminent displacement at the hands of Aqua America.  Aqua America supplies natural gas drillers in the Marcellus Shale region. The blockade was launched to halt Aqua America’s plans to begin construction of a withdrawal facility for water from the Susquehanna River to be used in fracking operations. Aqua America recently purchased the entire Riverdale mobile home unit to be used as a withdrawal site, and has issued lease termination notices to 32 Riverdale families. Construction was set to begin on June 1, but supporters of Riverdale mobile home park believe the blockade and protest kept the company from starting the project last week. It is unclear what additional steps Aqua America will take to displace those families who are choosing to remain. Aqua America refuses to sit down and negotiate in good faith despite repeated written attempts by the residents’ representation and advocates.

If you are in the vacinity, please lend your support by coming to Riverdale and standing with the residents. Other forms of support can visit the official website: Save Riverdale.

The dismantling of the community has left many residents in tears over the loss of their home. Deb Eck, one of the remaining residents, stated, “This park isn’t just a bunch of trailers with a bunch of people who don’t know each other. We’re all friends. We’re all neighbors. It’s a community. It’s one big family.”

The Susquehanna River Basin Commission (SRBC) permitted construction of the Riverdale water withdrawal facility in March. The SRBC, comprised of representatives from the White House and the governors of New York, New Jersey and Pennsylvania, granted forty-eight withdrawal permits at its March meeting, despite the objections of concerned residents. Aqua America has been permitted to withdraw up to three million gallons of river water daily. Susan Obleski, spokeswoman for the SRBC, stated that the Susquehanna has been facing severe drought this spring “at levels that haven’t been seen since 1910 and 1946.”

Fracking has been linked to cases of water contamination in towns across the country including Dimock, PA and Pavilion, WY. The gas industry is exempted from the Clean Water Act and Safer Drinking Water Act and as a result, many of the chemicals used in drilling are unknown. Pennsylvania law restricts the ability of local governments to regulate fracking operations and gags doctors from sharing information about chemicals used in fracking with public health officials. Pennsylvania’s Department of Environmental Protecting is facing criticism for its refusal to list the Susquehanna River as “impaired” under the Clean Water Act. According to John Arway of Pennsylvania’s Fish and Boat Commission, there has been a significant increase in fish with black lesions in the Susquehanna since last summer.

Today’s blockade is one of a series of escalating actions in resistance to increased fracking operations in the Marcellus and Utica shale regions. Pennsylvania activists disrupted the SRBC’s March hearing and have blockaded trucks carrying drillrigs in Lycoming County, and eleven Ohioans have been arrested for anti-fracking actions since last November.  Additional major anti-fracking events scheduled for this summer include a takeover of the Ohio statehouse on June 17, the Earth First Rendezvous from July 1-7, a Youngstown-based action camp from July 13-17, and a July 28 convergence in Washington D.C.

Residents and supporters are committed to stopping construction of the water withdrawal facility that threatens to raze their community. They are demanding that Aqua America permit residents to remain in the homes, compensate those who have already left and allow for the return of all residents who have already been displaced. Residents have requested that more supporters converge in defense of the Riverdale mobile home park and to, in Deb Eck’s words, “help us keep the River in Riverdale.”

Actions You Can Take, in addition to attending Hands Across Riverdale:
…if you are an Aqua America customer, send a note, pay only a portion or do not pay your next water bill until the residents of Riverdale Mobile Home Park are permitted to stay
.…if you are a resident of New York or Maryland, call your governor:  Gov. Cuomo at: 518-474-8390 or Gov. O’Malley at: 410-974-5041 and demand that the permit for Aqua America in Piatt Township, (Jersey Shore) PA be withdrawn at the June 7 Susquehanna River Basin Commission meeting.
…if you are an Obama supporter or campaign worker, call the campaign headquarters at: 312-698-3670, White House at: 202-456-1111 and Democratic National Committee at: 202-863-8000, and remind them that Pennsylvania is a swing state in the November election and that the Obama administration must recall the Aqua America permit in Piatt Township, (Jersey Shore) PA with his vote at the June 7 Susquehanna River Basin Commission meeting.

…if you are a Drexel University student, faculty, alumni or staff, call: 215-895-2000 and ask to be forwarded to the Office of the President John Fry. Tell President Fry that Nicholas DeBenedictis, a Trustee of the university, is the CEO of Aqua America, a company that is evicting families from the Riverdale Mobile Home Park and should no longer be trusted or honored with the title of trustee.

…if you are a resident of southeast PA, drop off a letter, flowers, prayers, artwork and thoughts for Nick DeBenedictis, CEO of Aqua America at his mansion at 231 Golfview Rd, Ardmore, PA 19003 and explain the situation to his neighbors, or do the same at Aqua America’s headquarters, 762 West Lancaster Ave., Bryn Mawr, PA.