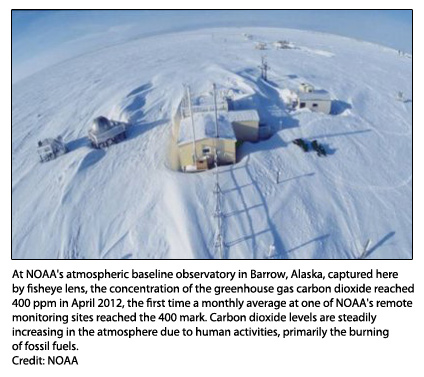 The concentration of carbon dioxide in the atmosphere of Barrow, Alaska, reached 400 parts per million (ppm) this spring, according to NOAA measurements, the first time a monthly average measurement for the greenhouse gas attained the 400 ppm mark in a remote location.

Carbon dioxide (CO2), emitted by fossil fuel combustion and other human activities, is the most significant greenhouse gas contributing to climate change.

“The northern sites in our monitoring network tell us what is coming soon to the globe as a whole,” said Pieter Tans, an atmospheric scientist with NOAA’s Earth System Research Laboratory (ESRL) in Boulder, Colo. “We will likely see global average CO2 concentrations reach 400 ppm about 2016.”

Carbon dioxide at six other remote northern sites in NOAA’s international cooperative air sampling network also reached 400 ppm at least once this spring: at a second site in Alaska and others in Canada, Iceland, Finland, Norway, and an island in the North Pacific.

Measurements at all those remote sites reflect background levels of CO2, influenced by long-term human emissions around the world, but not directly by emissions from a nearby population center. At other more locally influenced sites in NOAA’s network, such as Cape May, N.J., upwind cities influence CO2 concentrations, which have exceeded 400 ppm in spring for several years.

“Turning up the levels of greenhouse gases in our atmosphere is like turning up the dial on an electric blanket,” said Jim Butler, director of the ESRL Global Monitoring Division. “You know it will keep getting warmer, but you don’t know how quickly the temperature will rise, and it can take awhile for the blanket – or the atmosphere – to heat up.”

Scientists with ESRL’s Global Monitoring Division keep track of CO2 and other greenhouse gases in the atmosphere in two ways. First, the group coordinates an international cooperative flask sampling network in which scientists and volunteers at more than 60 sites around the world collect air samples weekly, shipping them back to Colorado for detailed laboratory analysis. Secondly, the group maintains six baseline observatories around the world, where staff collect flasks for analysis and also measure CO2 continuously, along with many other aspects of the atmosphere and solar radiation.

In Barrow, Alaska, the only remote northern site with continual CO2 monitoring, the average monthly value of CO2 reached 400.00 ppm for the first time in April. Flask measurements made at Barrow and other remote northern sites from the North Pacific to Norway also showed CO2 levels periodically reaching 400 this spring.

The remote, high latitude northern sites reached 400 ppm first in April and May, the peak of the natural CO2 cycle. Plant growth cycles remove the gas from the air during late spring and summer and add it back during fall, winter and early spring. This annual cycle is largest at Northern high latitudes. During June through August, CO2 will fall again, and next April and May it is expected be to 402 ppm or higher at the same northern sites.

Every year since 1959, when David Keeling of the Scripps Institution of Oceanography made the first accurate measurements of CO2 in the atmosphere, the concentration of the greenhouse gas has increased. In the early 1960s, it rose about 0.7 ppm per year. For the last decade, it has been rising at about 2 ppm per year. That observed increase, independent of the seasonal ups and downs described above, is due to the accelerating pace of emissions from human activities, particularly the burning of fossil fuels. 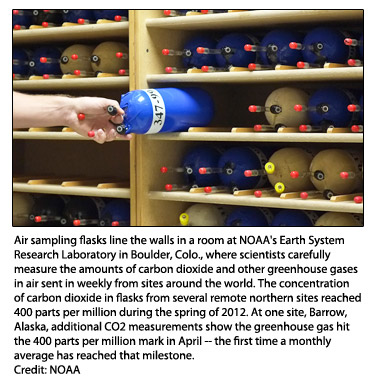 This spring’s numbers are technically “preliminary,” and will not be finalized until next year, but rarely change more than 0.2 ppm, Tans said.

Carbon dioxide is not the only greenhouse gas. NOAA calculates the Annual Greenhouse Gas Index every year, which takes into account the heating effects of other gases that are emitted from human activities (e.g., methane, nitrous oxide, and chemicals called chlorofluorocarbons). When those gases are also considered, the global atmosphere reached a CO2 equivalent concentration of 400 ppm in 1985; and 450 ppm in 2003. Atmospheric CO2 levels are currently higher than they have been at any time during the last 800,000 years. Watch a NOAA Earth System Research Laboratory animation of carbon dioxide levels for the past 800,000 years on YouTube at http://www.youtube.com/watch?v=SXHDwdd7Tf8.