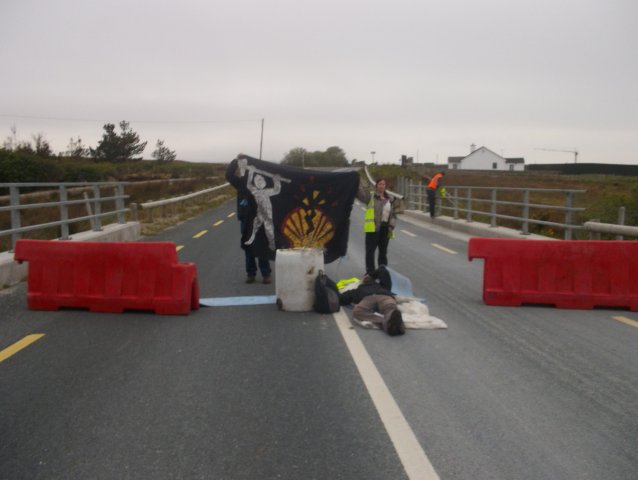 Turning back the trucks at Shell’s construction site, once again

Welcoming in the Spring, a blocakade on May 3rd held up traffic for over 3 hours between Bellanaboy and Shell’s Aughoose compound. A concrete lock-on in the middle of the road stopped the morning’s haulage – the first truck to come along was a huge concrete pumping machine which had to turn in the road and go back the way it had come.

The following day, Friday May 4th, the simple the announcement of a “Day of Solidarity” successfully stopped all Shell haulage. Once folks were satisfied that Shell wasn’t going to try and do any major work, they went to the Rossport Solidarity Camp to start moving the camp to the new location. 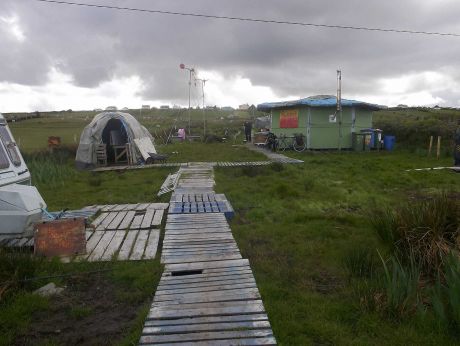 The old winter camp before the start of moving

Over the weekend all but the kitchen structure was taken down, hundreds of pallets were moved to the new field, and the kitchen marquee was put up in the new field. The summer camp is located two fields away from the winter field, next to the Aughoose church. There is one large communal sleeping space, but most people will be sleeping in tents for the summer. If you are visiting the camp bring a tent if you have one, but don’t let it stop you coming if you don’t!

There were about 20 people on camp for the weekend, and aside from a bit of wind, we lucked out with the weather. The tunes were pumpin’, and people really stepped up to get the work done! On Saturday we had a visit from a group of students who, with the help of a local farmer and his tractor, moved hundreds of pallets to the new field. Night time was relaxing with campfires and music, and high spirits. Many hands, light work!

Sunday evening included a presentation by the Earth First! Journal, where local community activists from County Mayo joined with the Solidarity Campers from a cross Europe to hear a presentation on the EF! movement in the the US. 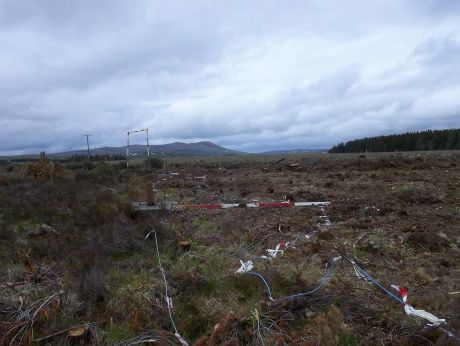 Surveying for Shell’s pipeline had a few setbacks, thanks to “the pixies” in the area…

To wrap it all up, and make sure the bank holiday was well spent, on Monday some pixies appeared at Shell’s forestry compound and undid a bit of surveying work on the pipeline route…

[For more pictures from the weekend, check out Indymedia Ireland]

Now the camp is building up for the annual June gathering, 1st-4th.
The week following the gathering will be a Week of Action against Shell, so come up for workshops and discussions at the weekend and if you can stick around to help with the actions afterwards. There are lots of roles involved in making an action as safe and effective as possible, for example taking photos, legal observer, support, as well as being in an arrestable role. You can read more here