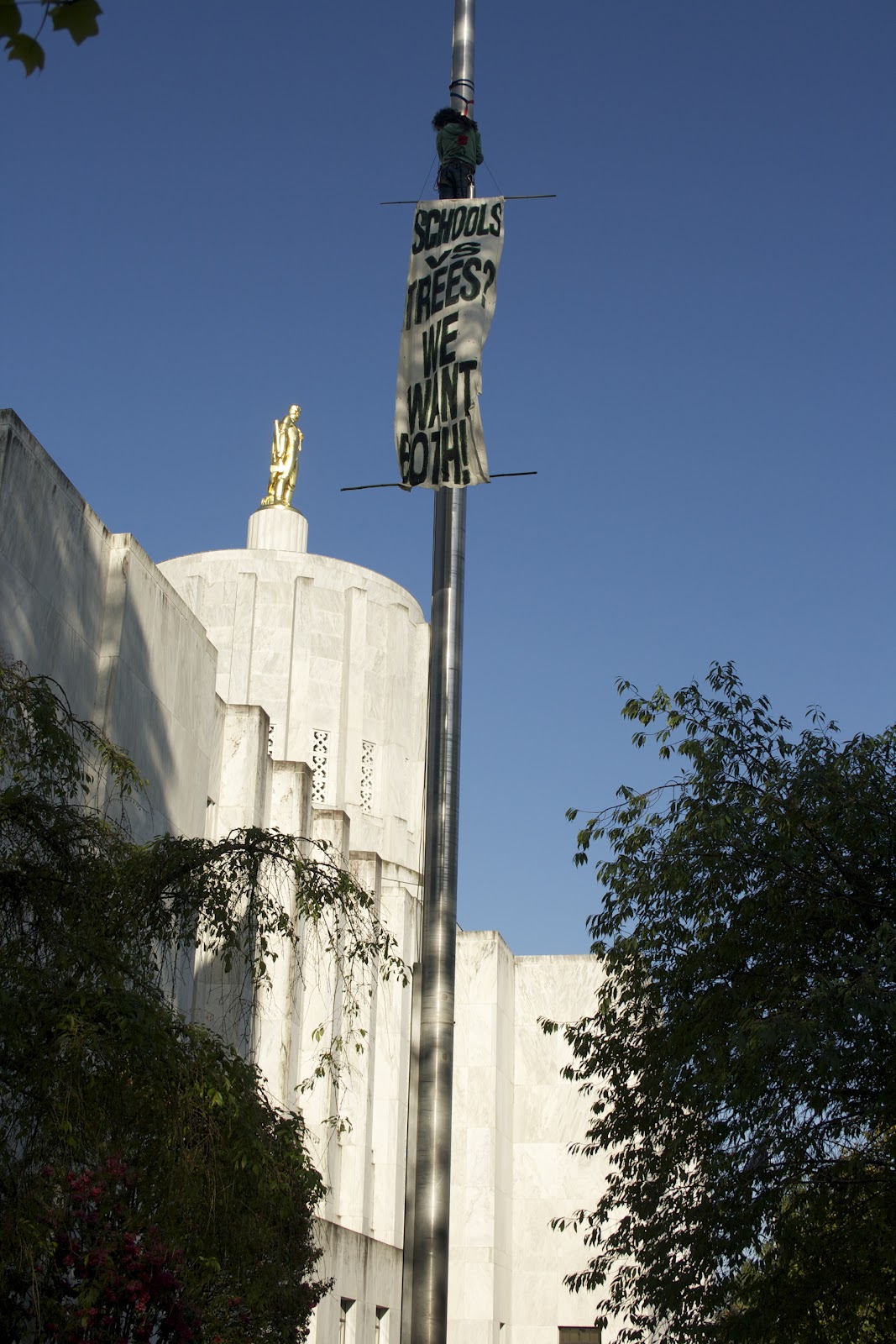 Cross Posted from ForestDefenseNow
A member of the Cascadia Forest Defenders climbed the flagpole in front of the State Capitol, demanding that Governor Kitzhaber and the State Land Board decouple public school funding from state forest management. The activist hung a large banner reading “Schools vs. Trees? We want both!”
While Governor Kitzhaber claims that increased clear cutting in the Elliott State Forest is necessary to maintain funding for public schools, less than one percent of Oregon public school funding comes from logging on state lands. In April, Governor Kitzhaber admitted that revenue collected from certain state lands—called the Common School Fund– was a “drop in the bucket” for our starving public school system. Cascadia Forest Defenders say: Stop clear-cutting ancient forests for “a drop in the bucket”!
“The two things I care about most in my state are schools and forests, and now I know that Kitzhaber has compromised both.” says Eugene teaching assistant Erin Grady. “We’re here because we think that Kitzhaber is pitting our schools against our forests, and we don’t think that’s fair to either.”
In 2011 Kitzhaber and the State Land Board approved a plan that nearly doubles the annual clearcut in the Elliott State Forest. The Land Board claims that logging on state lands must increase to maintain the Common School Fund, which distributes profits from some state logging and mining operations to public schools.
Yet, Oregon’s timber elite have dodged millions of dollars in taxes since Kitzhaber got rid of the timber harvest privilege tax in 1999. The Oregon Department of Revenue estimates that Oregon loses $70 million in tax revenues per year since Kitzhaber passed Oregon House Bill 3575. That’s nearly ten times what the state gets annually from clear cutting the Elliott State Forest.
In 2011, 48.8 million dollars were distributed to schools from the Common School Fund, a negligible contribution to Oregon’s 2011 school budget of nearly 6 billion.
Cascadia Forest Defenders want good schools for Oregon’s children and vibrant, intact ecosystems. We believe that education should not be funded by clear-cuts. There are no schools on a dead planet!
Posted in News.