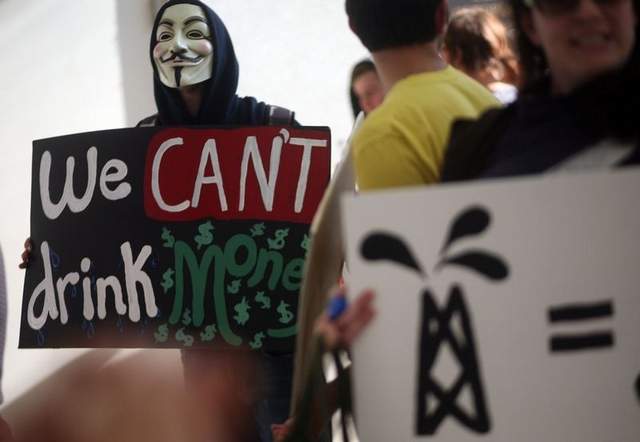 LANSING – An auction of state-owned oil and gas rights on 109,000 acres across lower Michigan, including Oakland County, was briefly disrupted this morning by anti-drilling demonstrators.

One protester, who stood up as bids were being taken and began to talk over the auctioneer, was taken into custody for disturbing the peace.

A group of 50-100 protesters picketed outside the state building where the auction was being held, many of them from Barry County, where much of the acreage being offered today is located. The focus of much of their opposition is to a drilling technique called hydraulic fracturing, which leads to contamination of water resources.

After the auction got under way, a group of demonstrators circled the building to an area outside of the auction room and began to chant and pound on makeshift drums and windows. After about 30 minutes, state and city police moved them to a sidewalk about 40 feet from the building.

Inside, several other demonstrators were escorted from the room after standing up and loudly objecting to the proceedings. One person was led away by conservation officers as she shouted, “We need to ban fracking!”

Several other anti-drilling activists registered to bid in the auction, and said they hoped to be able to purchase some of the leases and prevent development.