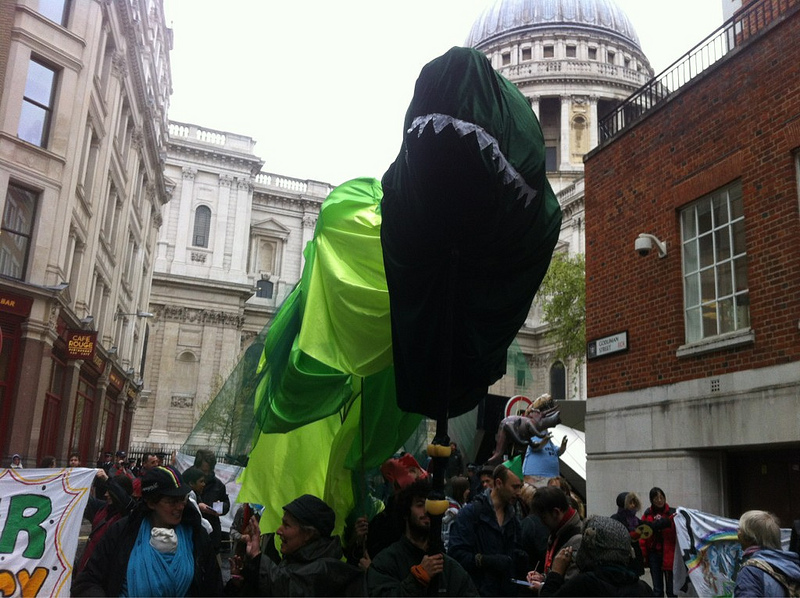 On May 3rd,  hundreds of protesters from climate and anti-cuts groups across the country teamed up to block the UK Energy Summit in the City of London. [1] They descended on the conference venue at 11.45 am, saying they intended to remain there to disrupt the UK Energy Summit. At least 300 protesters targeted all of the main entrances to the Summit venue, attempting to push past police to enter the conference.
The UK Energy Summit [2] involves CEOs of the Big Six energy companies, who have recently come under widespread criticism for drawing in record profits whilst one quarter of UK households have been pushed into fuel poverty. [3] The event took place at The Grange Hotel, near St Paul’s Cathedral.

The protest congregated at four locations before descending on the summit: Tate Modern, St Paul’s, City Thameslink and Canon St. En route to the summit venue, protesters used “any means necessary” to get their message out by using stickers, chalk and noise to draw attention to the protest. Once they arrived at The Grange Hotel, they attempted to enter the hotel building with banners and giant model dinosaurs as a reference to the outdated “dinosaur technology” of fossil fuels. Reports have been of police violence when at least two people were arrested, with one protester possibly knocked unconscious by police. 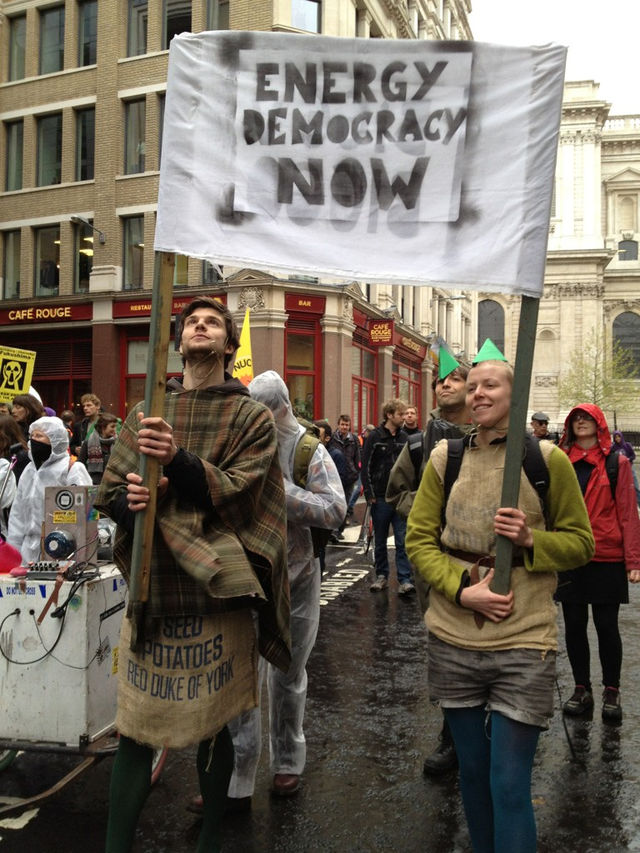 The Climate Justice Collective (CJC) is a national network – which says it tackles corporate control, fuel poverty and climate change – is behind the protest titled ‘The Big Six Energy Bash’. Stemming from the colourful and confrontational Climate Camp [4], CJC says it is also close to the Occupy movement.

Billie Blackwood, CJC said: “The UK Energy Summit is a classic 1% stitch up. It is corporate elites, including the government, conspiring to keep the status quo of high energy prices, soaring profits, growing climate instability and disaster capitalism. This conference is the wrong people asking the wrong questions and proposing the wrong solutions.”

Katharine Jones, an anti-cuts protester from Manchester said: “The UK Energy summit gives the Big Six an opportunity to push the government further into their pockets. The government are putting more people into fuel poverty through brutal welfare cuts; it’s great that groups like UK Uncut and Disabled People Against the Cuts are teaming up with climate activists to oppose the corporate control that is driving poverty, austerity and climate crisis.”

The protest was organized around themed ‘blocs’. Each bloc reflects a different aspect of climate injustice and has played a different strategic role in disrupting the conference.[5]

• The Robin Hood Bloc focuses on the energy monopoly of the Big Six energy providers which control 99% of domestic energy in the UK. Using Robin Hood imagery it calls for ‘Taking the power back’ and putting ‘People before profit’.

• The Dirty Energy Bloc promises ‘Dirty energy, dirty bass-lines and dirty business.’ It represents destructive fossil fuel energy sources such as fracking, tar sands, deep sea oil drilling and open cast coal, that are costing the earth and driving up the cost of our
fuel bills.

• The Fossil Free Futures Bloc is family-friendly and aims to drive the Big Six Energy Dinosaurs into extinction. This bloc demonstrates the color and creativity of the democratic, fair and clean alternatives to the prehistoric energy companies’ fuels and thinking.

• The Housing Bloc will speak out for warm homes and community control. The bloc exposes the role of Big Six profiteering alongside government degradation and privatization of housing as the main factors driving fuel poverty.

[2] Details of the UK Energy Summit can be found at
http://www.economistconferences.co.uk/event/uk-energy-summit-2012/5964

[5] Protestors have signed up to join a bloc online at climatejusticecollective.org/bigsixbash and receive SMS text alerts about the meeting place and action plan for their bloc.