Native Americans in Arizona and South Dakota delivered powerful testimony on the destruction of their homelands by uranium mining, coal fired power plants and oil and gas drilling, during sessions with UN Rapporteur on the Rights of Indigenous Peoples James Anaya. 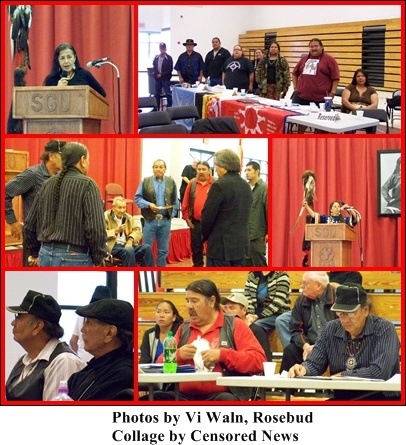 During testimony in Tucson last week, April 26 — 27, Navajos from Black Mesa described the corporate crimes of Peabody Coal, Arizona senators and non-Indian attorneys that have led to the relocation of Navajos, coal mining on Black Mesa, and the continuance of some of the dirtiest coal fired power plants in the US on Navajoland.
Havasupai demanded a halt to the uranium mining in the Grand Canyon that now threatens future generations in the Southwest with the poisoning of the water.

Damon Watahomigie, Supai, said, “As the first born warriors of the Grand Canyon we refuse to become the next millennium’s world terrorists by allowing mega nuclear industrial complex mining industries to mine in the Grand Canyon.”

In South Dakota, White Plume, Lakota, said, “Mr. Anaya, I ask you to keep this message clear, do not pretty up my testimony. I am saying that America is committing ethnocide against our way of life, eco-cide against our Mother Earth, and genocide in our Lakota Homelands. Our Human Rights are being violated and our Inherent Right to live as Lakota People and Nation is being violated as well. Without access to our lands and waters we cannot live our collective Inherent Rights to be who we are.

“There are uranium, oil, and gas corporations here now, and more want to come. We did not invite them.

“America welcomes Canadian-owned Cameco uranium corporation, TransCanada oil pipeline corporation, and PowerTech uranium corporation to come and obtain permits to mine uranium and slurry oil in our Territory against our wishes, this extraction and pipeline threatens our Oglalla Aquifer, which gives 2 million people drinking water and irrigates the world’s bread basket.

White Plume said, “We have not given our free, prior and informed consent as required by the Declaration of the Rights of Indigenous Peoples adopted by the United Nations General Assembly, we know not everyone is satisfied with the Declaration, but it is a minimum standards document.”

In Arizona, Navajo Leta O’Daniel testified of the horrors forced on Navajos, from the Long Walk to relocation, coal mining and abusive boarding schools.

“My neighbors come from Yeii, Holy people from the ancient Anasazi. Three of my brothers are Medicine Men and I listen to their stories. I can show you where our tracks are side-by-side with the dinosaurs and share origin stories back to the time the dinosaurs ate some humans and our ancestors lived in the cliff to stay away from them and the twin warriors, Monster Slayer and Born by Water helped save our people from the dinosaurs.

“We have prayers and songs for our livestock given to us by the Holy People. Our oral tradition, passed down from generation to generation instructs us to hold on to and take care of our livestock. Spider Woman taught us how to weave rugs. Our designs tell woven stories. It sustains us and provides a livelihood.”

Leonard Benally, resisting relocation at Big Mountain for decades, described the scheme behind Navajo relocation and the current attempts to steal Navajo water rights. Benally said it is time to hold Peabody Coal responsible for genocide, and expose the role of corrupt Navajo politicians, Arizona Congressmen and non-Indian attorneys.

Benally said Navajo President “Ben Shelly of the Navajo Nation is working with Senator Kyl and McCain to pass legislation for the Little Colorado River Water Rights Settlement that gives away our water rights to Peabody Coal Company and Navajo Generating Station. We believe the Settlement is a tragedy not only due to the minimizing Navajo rights but is waiving hundreds of millions of dollars in potential compensation for rights waived.

“Our liberty is being sacrificed for an economic bonanza based on fraud and corruption. Our justice has been prostituted by hand outs, hopelessness, and conformity elevated to the status of the National Security doctrines. We are the historical lot of the dispossessed. Democracy has been whitewashed with imported detergent that allows reclaimed sewer water to get dumped on our Sacred San Francisco Peaks.

“Peabody’s collusion with the US government has resulted in a dark infamy of genocide and crimes against my people and the environment – relocation, the Bennett Freeze, uranium mining, all in the pursuit of energy resource development fueled by corporate and governmental greed and collusion.”

Navajo elder Glenna Begay of Black Mesa said Peabody Coal has no respect for the dead.
“Residents in the mining area have been jailed or threatened with jail for trying to protect their burial and sacred sites. Other residents have watched the unearthing of graves.”
Hathalie (Medicine Man) Norris Nez said the prayers of the Dine’, Navajos, are for all mankind.

“In Big Mountain, Black Mesa, on Hopi Partition Land (HPL) there were many sacred sites where offerings were given.The Holy People, the Star People recognize us by these sites that are sacred where we Diné, five fingered humans give offerings. They acknowledge that we are doing our duty to give our offerings to the Holy People.These places are for the wellness of the people, not only the Diné.Our prayers are said for all mankind.”

As the sessions continue across the United States, the Rapporteur and the United Nations are being pressed by Native Americans to use this testimony in a way that will result in real benefits to the people, instead of simply gathering words and reducing those words to brief summaries that lead to no real change.