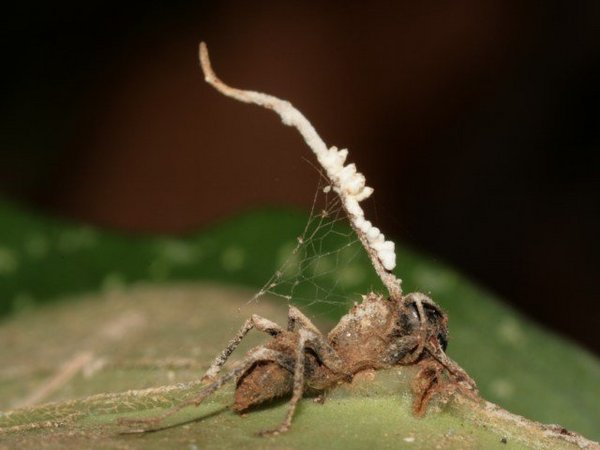 This zombie ant has been taken over by a brain-manipulating fungus (Ophiocordyceps unilateralis s.l.), which in turn has been castrated by a hyperparasite fungus (white with yellow material).

The Cordyceps fungus has become a staple of “stranger than fiction” nature stories: Its complex and lethal parasitism of ants, causing the insects to climb as high as they can before the fungus bursts like a horn from their heads, is both bizarre and captivating. Now scientists report that the parasite is getting a dose of its own medicine, as it finds itself under attack from yet another parasitic fungus — one that targets Cordyceps. It’s nature’s way to pile weirdness upon weirdness.

Researchers led by David Hughes at Penn State University were looking into how some groups of ants were able to survive a Cordyceps attack. The fungus is extremely virulent and can often wipe out an entire colony. Ants groom each other to remove potentially troublesome fungus and microbes, but that couldn’t account for the survival rates they were occasionally seeing.

What they found (and reported in PLoS ONE) was another fungus growing in and around the ant colonies — just as much a specialist as the first fungus. This newly discovered fungus attacked the “zombie-ant” fungi and effectively neutered them, sabotaging their spore-producing organs and preventing them from fruiting. Some ants would still be infected (the researchers described a “high density of zombie-ant cadavers in the graveyard”), but the spread of zombie-ism was largely stopped.

Each species of Cordyceps fungus targets only one species; the ant-zombifying variety is just the best-known type. That there could be a fungus that was parasitic in such a fascinating way on a single species is amazing enough, but that a second fungus would specialize in attacking the first is almost beyond belief. It’s an example of the density and biodiversity that one finds in, as Hughes puts it, “the exciting theater played out on the rainforest floor.”