by Center for Biological Diversity 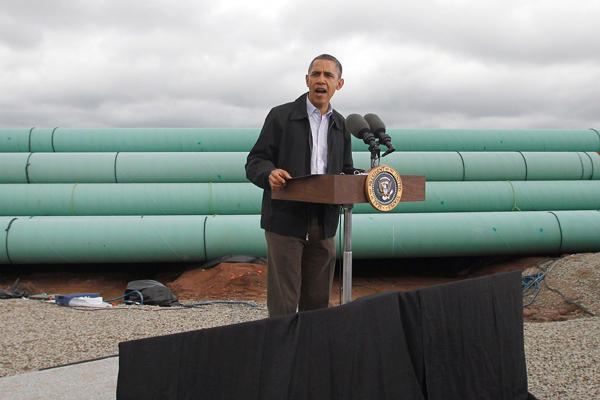 After rejecting the Keystone XL pipeline proposal in January, President Obama gives a green light to its southern leg – a bid to ease a key bottleneck to new oil supplies and defuse critics on gas prices.

A new route for the Keystone XL pipeline that TransCanada will reportedly submit permit applications for as early as Friday avoids portions of the Sandhills in Nebraska but crosses the Ogallala Aquifer, as well as hundreds of other water bodies and habitat for a number of endangered species.

“The new Keystone route fails to avoid significant risks to an important aquifer and the rivers and streams that provide fresh water for millions of people and habitat for endangered species like the whooping crane, piping plover, and pallid sturgeon,” said Noah Greenwald, endangered species director at the Center for Biological Diversity, which has worked to stop the destructive pipeline project. “It’s a game of environmental roulette, and the American public is being asked to bear all the risk for a pipeline that will mainly benefit big oil’s bottom line by allowing export of dirty tar-sands oil to the global market.”

If constructed Keystone XL will transport tar-sands oil 1,700 miles across six states and hundreds of waterways, posing an unacceptable risk of spill. An existing pipeline called Keystone 1 has already leaked 14 times since it started operating in June 2010, including one spill that dumped 21,000 gallons of tar-sands crude. Another tar-sands pipeline spilled 800,000 gallons in the Kalamazoo River.

Strip mining of oil from Alberta’s tar sands is also destroying tens of thousands of acres of boreal forest and polluting hundreds of millions of gallons of water from the Athabasca River, in the process creating toxic ponds so large they can be seen from space. Extraction and refinement of tar-sands oil produces two to three times more greenhouse gases per barrel than conventional oil and represents a massive new source of fossil fuels that leading climate scientist Dr. James Hansen has called “game over” for our ability to avoid a climate catastrophe.