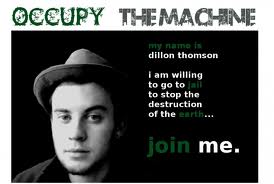 Folks from the Occupy The Machine (OTM) coalition have sent out a letter announcing a decision to postpone their announced action later this month. The following letter explains their reasoning. While it is disappointing that the OTM call to action, and the Deep Green Resistance network that spurred it, continues to be words on a screen, it is also encouraging that their simple threat of action against a major refinery resulted in concessions to a local impacted community. Perhaps OTM’s call for action this Fall in Appalachian coal regions, or “District 12” as many are coming to know it, will manifest into something more fruitful…

Dear friends and supporters,
Occupy the Machine organizers have made a very difficult decision. We have decided to postpone our refinery blockade action until further notice. We did not make the decision lightly. We are extremely disappointed that we have to postpone this action, but very comfortable that we made the right choice. Of the many factors that contributed to this decision, there are two in particular that weighed heavily on our collective conscience.

OTM’s mission includes a central focus on solidarity with all impacted communities. The public announcement of our campaign has inspired Valero to offer concessions to the residents of Manchester that live in the refinery’s shadow. Community representatives involved in this process are more interested in reaching a settlement with Valero than engaging in direct action. OTM is willing to step aside and allow for these negotiations to move forward; to be clear, The Occupy the Machine coalition is dedicated to sustained, escalating direct action that supports and is supported by the local community. We respect the communities with whom we choose to partner.

Additionally, there are pending criminal charges against fellow occupiers who were recently arrested in an action intending to shut down the Port of Houston. It has come to our attention that another action targeting the Houston industrial complex may give ammunition to District Attorneys looking to make an example out of these protesters. Essentially, there is a risk that our actions will be leveraged against our friends who are already facing felony charges for political protest. To stand in solidarity with those facing prosecution, OTM believes postponing our Houston action is appropriate.

We extend our deepest apologies to those who have already made irreversible plans to attend this event; accordingly, Houston coalition members invite anyone in this situation to join in an Encuentro and face-to-face meeting with local community members and local activists. Additionally, our local team can guide you on a ‘toxic tour’ of Houston’s petrochemical industry so that you can experience first hand the filthy reality of the fossil fuel economy. If it is too late for you to cancel your plans for Earth Day weekend in Houston, please contact us at occupythemachine@riseup.net and we will send you further details on what the weekend will look like.

Once again, OTM is resolved in taking our activism to a new level. We invite you to imagine, as many of you already probably have, if thousands of people occupied refineries, roads, ports, oil wells, gas wells, surface mines, etc. In other words, imagine if people occupied the locations where the 1% destroy the land and exploit the people for profit. Imagine their production stopping, their stock prices falling, their cash flow being interrupted, their contracts unfilled, their ability to get loans ended, their business finished!

In order to be effective, though, we need numbers: a mass of committed activists willing to give their time and energy. We need bodies to support blockades that will stay, day after day after day after day… as long as it takes. For every person they drag away to jail, we must bring ten more to replace them. We need people who can’t come to the action to support those who do. We need financial support for those willing to risk arrest. We need you to join us in this vision and organize with us.

We truly regret that we will not be able to bring this vision into fruition this Earth Day weekend; nonetheless, we are not giving up. We will Occupy the Machine —stop the 1%, literally.

In Solidarity
-Occupy the Machine Coalition

Check out OTM’s cameo on SubMedia TV’s “Its the End of the World As We Know it and I Feel Fine.” Amazing.