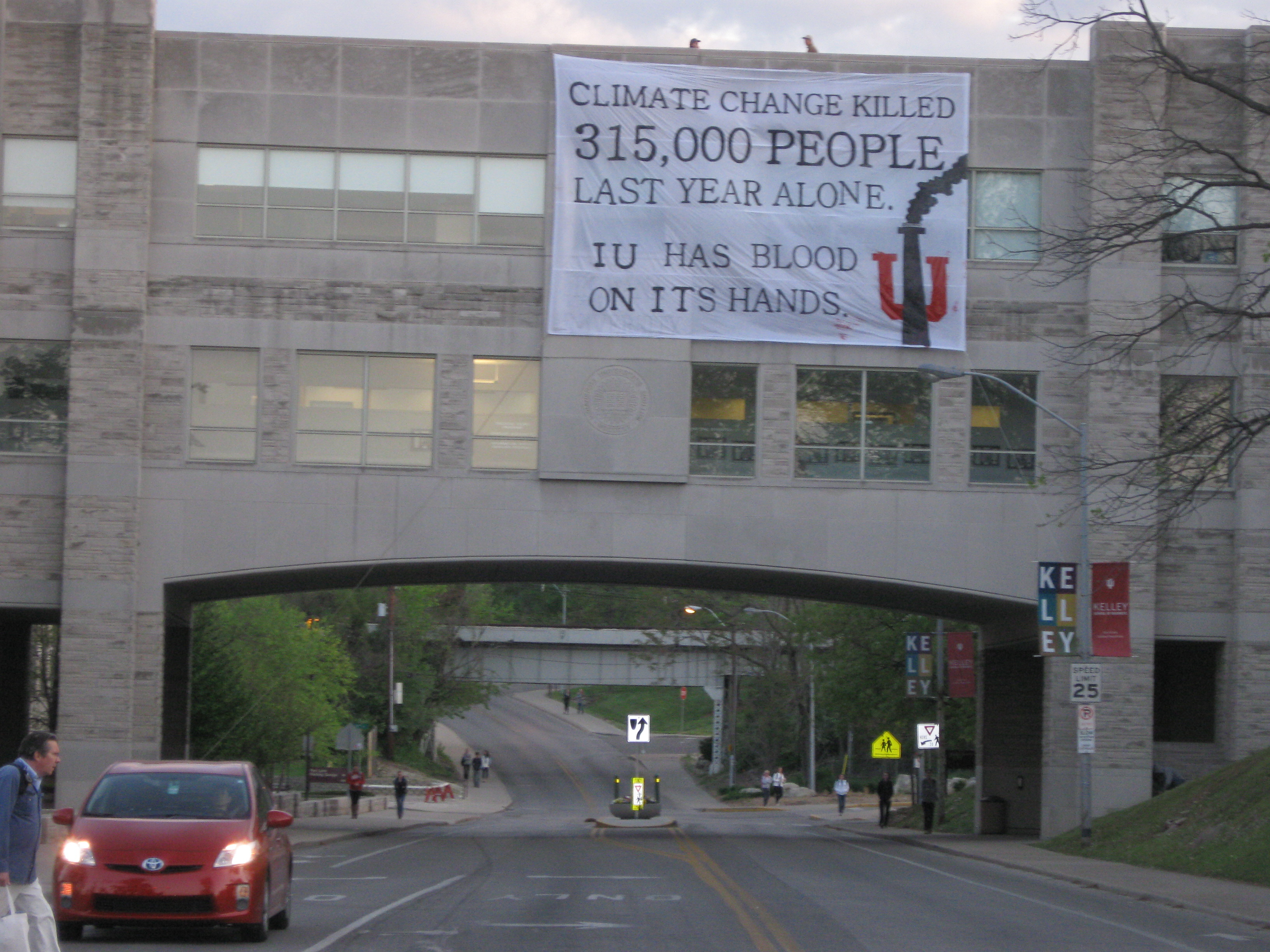 Early Monday [April 9, 2012] morning, several anonymous IU students concerned about the climate-related death toll of their campus’ coal-fired heating plant dropped a massive 30’x20’ banner over the two-story bridge of the Kelley School of Business on Fee Lane. The banner, which was dropped intentionally within eyeshot of the campus’ coal plant, read as follows: “CLIMATE CHANGE KILLED 315,000 PEOPLE LAST YEAR ALONE. IU HAS BLOOD ON ITS HANDS.”

The students responsible for the banner cited this alarming figure from a study released in 2009 by the Global Humanitarian Forum, a non-profit foundation presided over by former UN Secretary General, Kofi Annan. This landmark publication, entitled “The Anatomy of a Silent Crisis,” found that every year approximately 315,000 people die prematurely due to weather-related disasters and environmental degradation (such as deterioration of arable land) associated with anthropogenic climate change and what by the year 2030, “the lives of 660 million people are expected to be seriously affected.”

The students responsible for the banner drop have asserted that they are not associated with any formal campus or community organization, although they “stand in absolute solidarity with the active pursuit of students on Michigan State University’s campus to shut down their own coal-fired power plant.” The IU heating plant was chosen as a target by these students because, although the university itself has found that “Energy consumption on the Indiana University – Bloomington (IUB) campus is both unsustainable and climate altering,” there has been very little serious discussion about switching to clean energies such as wind, solar, or geothermal. This action comes just several days before the IU Board of Trustees meeting, where it is expected that the campus’ Energy Master Plan will be discussed and voted upon.

While it is expected that the campus’ heating plant will be steadily moving from coal to natural gas, these students assert that this will only exacerbate water poisoning issues associated with hydrofracking and do nothing to address climate change. According to physicist Nathan Myhrvold, the lead author of a 2012 study about natural gas to climate change, “It’s worthless for [fighting] climate change, as far as we can tell.” In a final declaration, the student activists stated directly: “We can no longer idly stand by as people of the Global South suffer and die because of our university’s backward policies towards energy production. As this looming humanitarian and environmental disaster is ignored and escalated, we are left with no choice but to escalate our tactics.”

The Anatomy of a Silent Crisis PDF

IU Office of Sustainability’s findings about energy use