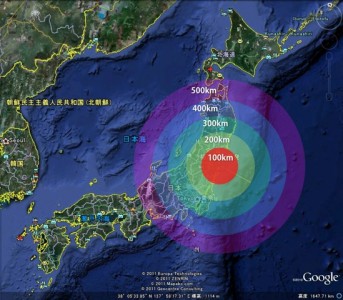 Tokyo Electric Power Co. said as much as 12 tons of radioactive water leaked from a pipe at its crippled Fukushima nuclear station, the second such incident in 11 days at the same pipeline, raising further doubts about the stability of the plant.

Part of the water may have poured into the sea through a drainage ditch, Osamu Yokokura, a spokesman for the utility, said by phone. The company known as Tepco stopped the leak from a pipe connecting a desalination unit and a tank today, he said.

“There will be similar leaks until Tepco improves equipment,” said Kazuhiko Kudo, a research professor of nuclear engineering at Kyushu University, who visited the plant twice last year as a member of a panel under the Nuclear and Industry Safety Agency. “The site had plastic pipes to transfer radioactive water, which Tepco officials said are durable and for industrial use, but it’s not something normally used at nuclear plants,” he said. “Tepco must replace it with metal equipment, such as steel.”

Tepco has about 100,000 tons of highly radioactive water accumulated in basements at the Fukushima Dai-Ichi nuclear station nearly 13 months after the March 11 quake and tsunami caused meltdowns and the worst radiation leaks since Chernobyl. The tsunami knocked out all power at the station, causing cooling systems for reactors to fail. The utility was forced to set up makeshift pumps to get cooling water to the reactors, with most of it then draining into basements.

Tepco has been criticized before over its handling of the radioactive water following several leaks into the sea, including the one reported on March 26.

Last year, the environment group Greenpeace International said it found seaweed and fish contaminated to more than 50 times the 2,000 becquerel per kilogram legal limit for radioactive iodine-131 off the coast of Fukushima during a survey between May 3 and 9.

The radioactive material discharged into the sea from the Fukushima plant is the largest in history, according to a study by the Institute for Radiological Protection and Nuclear Safety. The institute, which is funded by the French government, made the estimate in October last year and said it was 20-times the amount calculated by Tepco. Tepco declined to comment on the report at the time.

The latest leak contains about 16.7 becquerels per cubic centimeter of radioactive cesium 134 and 137 combined, Tepco said in a statement today. It’s still investigating how much strontium and other types of radioactive particles are contained in the water, Yokokura said.

Strontium can be absorbed in the body through eating tainted seaweed or fish. It then accumulates in bone and can cause cancer, said Tetsuo Ito, the head of Kinki University’s Atomic Energy Research Institute, in a December interview.

On March 26, about 120 tons of radioactive water may have leaked from a pipeline connected to the desalination unit, Yokokura said. Of the leaked water, Tepco believes about 80 liters poured into the sea, he said.

To contact the reporter on this story: Tsuyoshi Inajima in Tokyo at tinajima@bloomberg.net